Nerf has revealed another new RC drone through CNET. The new N-Strike Elite Terrascout RC Drone Blaster is an RC offroading vehicle that is able to travel and fire 18 Nerf elite darts. 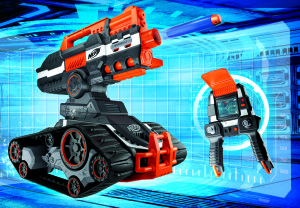 Here is the official description by Hasbro:

Get the drop on your friends with the N-STRIKE ELITE TERRASCOUT RC DRONE! This remote controlled blaster drone features high-speed, all terrain tracks (not for use in wet conditions) for quick strikes and an 18 dart clip for remote bombardment. Kids can use the live video feed featured on the controller’s LCD screen to scout the battlefield, locate targets and plan their attack. Maneuver the angle of the drone’s blaster remotely, and fire a single-dart by pressing and releasing the trigger, or hold down for extreme rapid-fire blasting in battle. Record audio and 720p HD video to an SD card (not included) and share epic battles and campaigns with family and friends. The controller will slide onto the back of the drone’s blaster and snap into place for storage. This product is for use in and outdoors. The drone also includes tactical rails, compatible with N-STRIKE ELITE accessories, each sold separately. Controller requires 4 AA batteries (not included). Includes blaster, camera, remote control with LCD screen, rechargeable NiMh battery, charger, and 18 N-STRIKE ELITE darts. Available at most major retailers nationwide and HasbroToyShop.com. (Ages 8 years & up/Approx. Retail Price: $199.99/Available: Fall 2016)

This RC Drone blaster appears to be quite a fun blaster to use and I really like the fact that you are able to see live footage of the blaster’s perspective. Unfortunately the Terrascout is a whopping $200 and I’d hate to see how much it is in Australia and New Zealand.

At least the Terrascout looks much more hopeful than the Terradrone (Nerf’s last drone blaster). 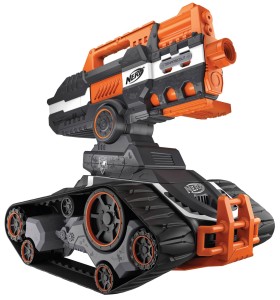