A great day for HvZ, and despite low attendance we were able to host some decent games. 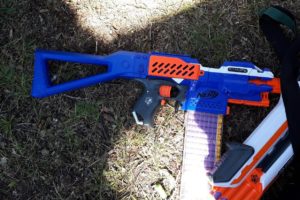 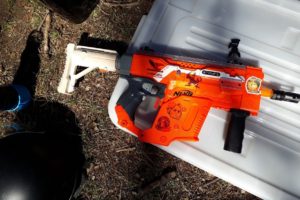 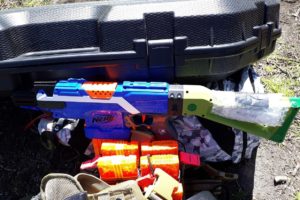 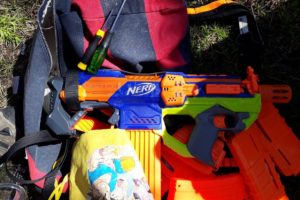 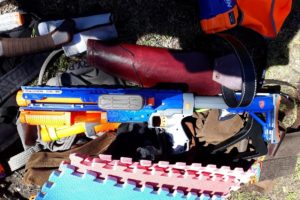 N-Strike Raider/Elite Rampage – pump-action, mag-fed springer. All-rounder springer, leaning towards ROF. Notable for being pump-action out-of-box. Horizontal magwell can be difficult to use.

N-Strike/Elite Alpha Trooper – pump-action, mag-fed springer. All-rounder springer, leaning towards ROF. A little weaker than most of its contemporaries, but again notable for being pump-action out-of-box. 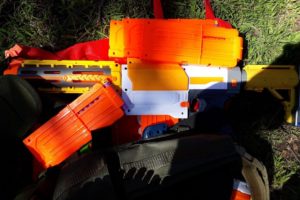 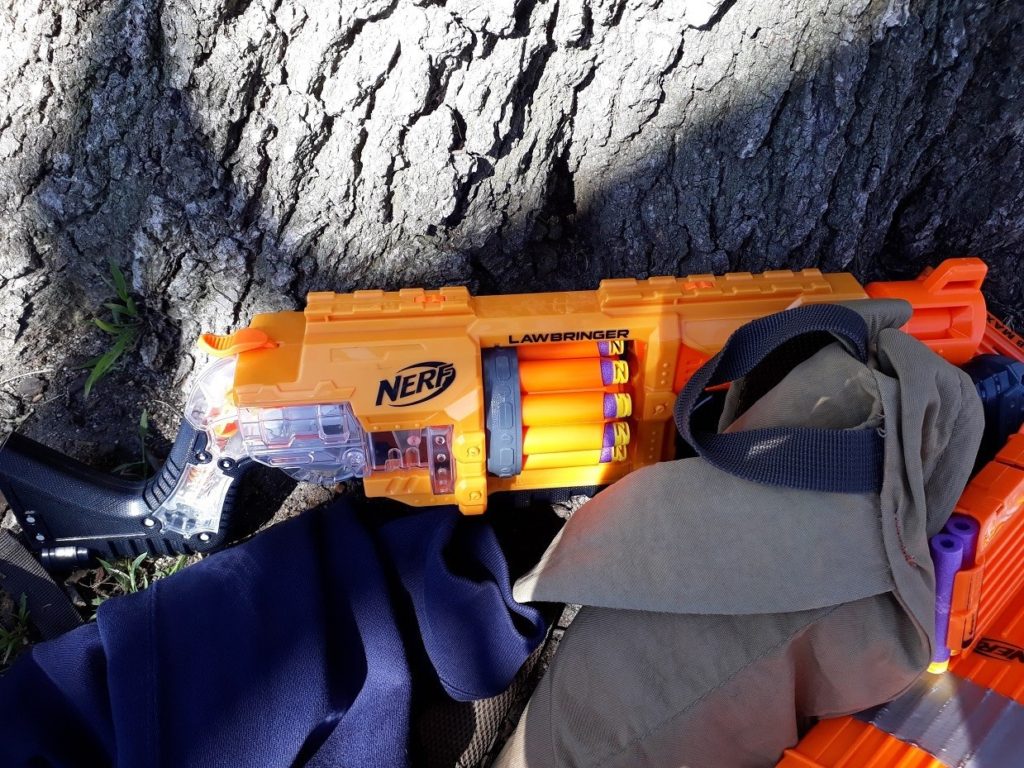 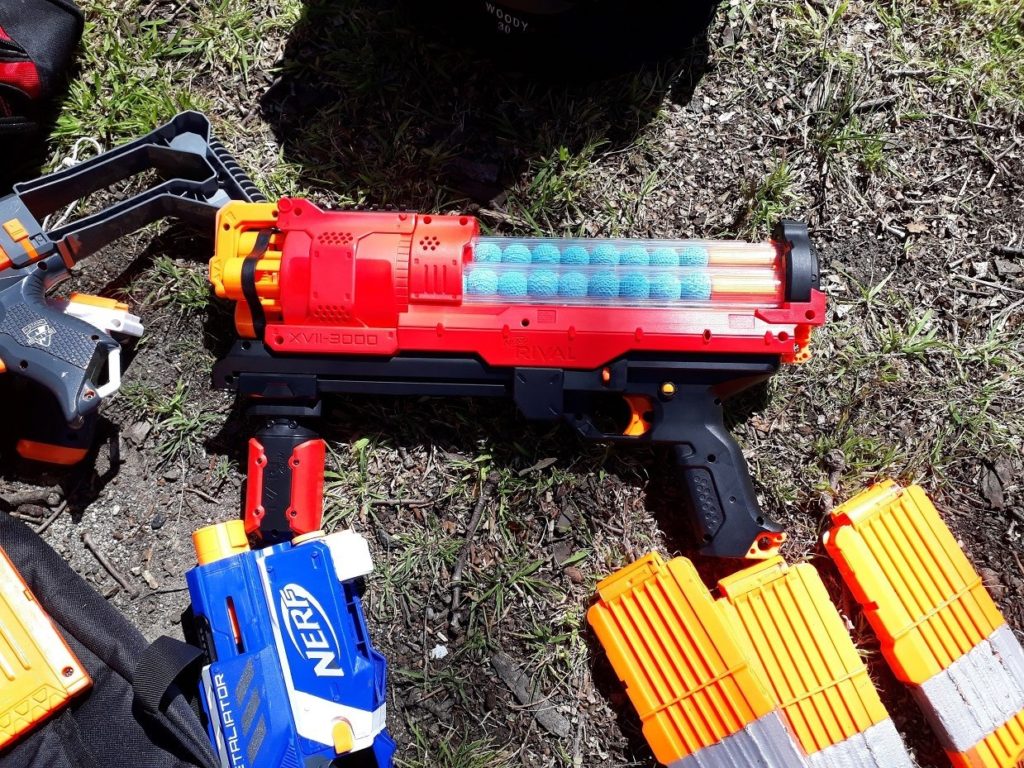 ZS Scravenger – lever-action, mag-fed springer. Relatively slow firing springer, with essentially no advantage to any of its contemporaries besides questionable one-handability. 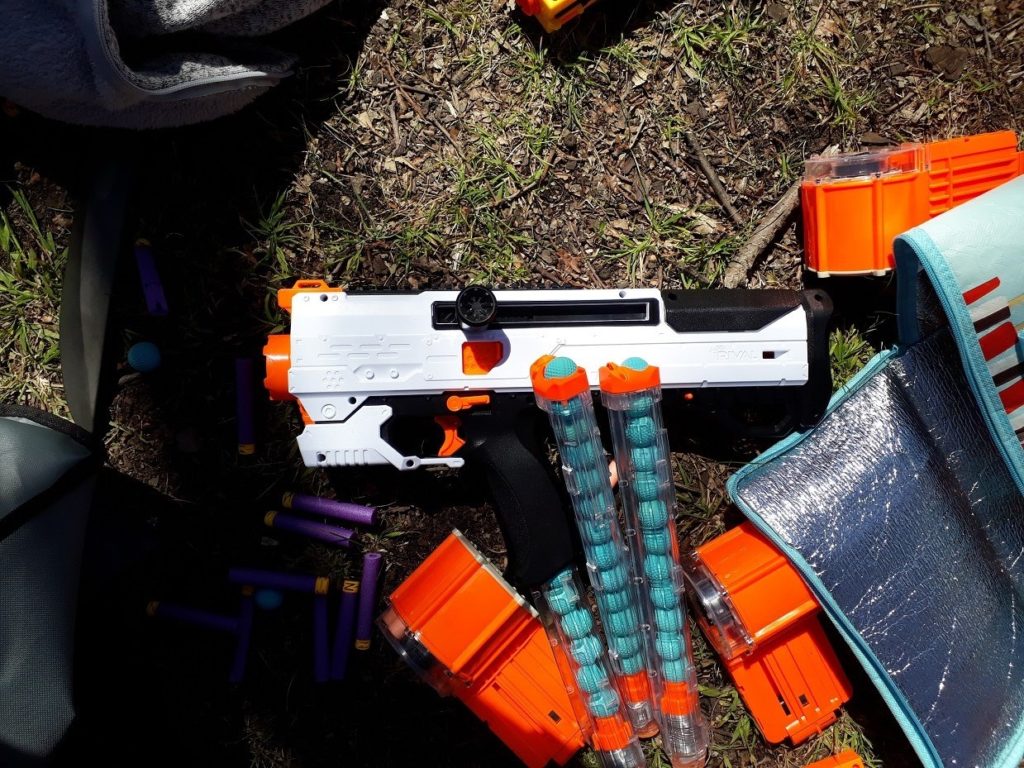 Rival Helios – bolt-action, mag-fed springer. Relatively slow firing springer, with all the usual advantages and disadvantages of being a Rival blaster. 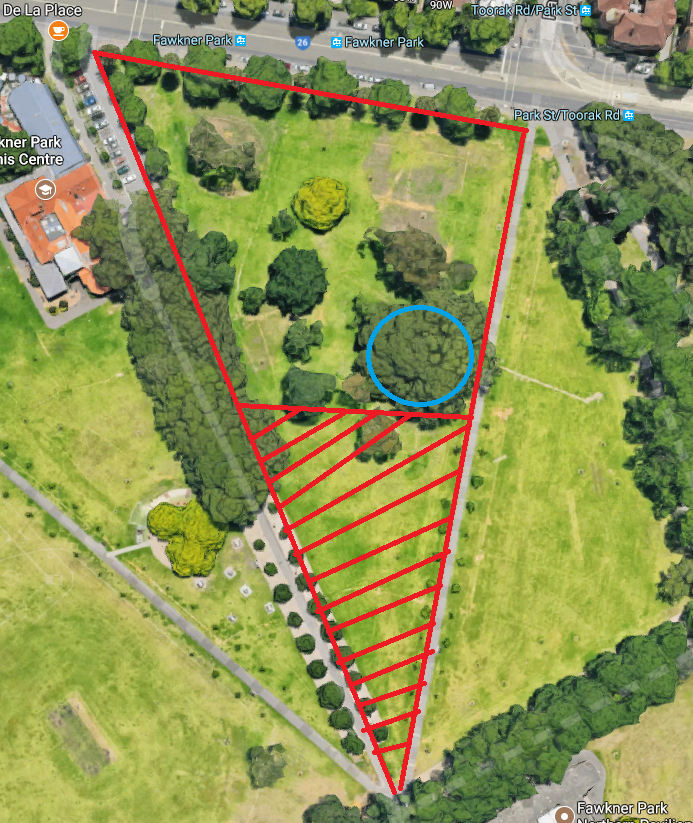 The weather was pretty nice for Nerfing, peaking at about 25C with clear skies. We had a fairly low turnout today, peaking around 20 or so players close to lunch time. As has been the trend recently, a larger proportion of players were younger and/or newer, with fewer veterans.

For this event, we trialled a batch of Z-darts to potentially take over as MHvZ’s primary dart pool. Much of the Melbourne Nerf community voted for Z-darts over Waffles, with notable arguments for their superior compatability – several players had commented on how our previous Waffle pool were less reliable in single shots, revolvers and stock mag-fed blasters.

One particular issue with Z-darts was their varying compressibility depending on rotation. Compressing the walls of the Z of the tips is very easy, however the edges of the Z do not compress well, and this can cause problems with flywheels if the edges are aligned with the flywheel surfaces. Besides two specific blasters having trouble however, I was not aware of any dart-related problems. I personally am not a big fan of Z-darts because this alignment quirk causes a little inconsistency with flywheeler muzzle velocity, and I’m not a fan of the slicker tip compound compared to the more standard rubber of Waffles. Nonetheless, I have no major issue with them. 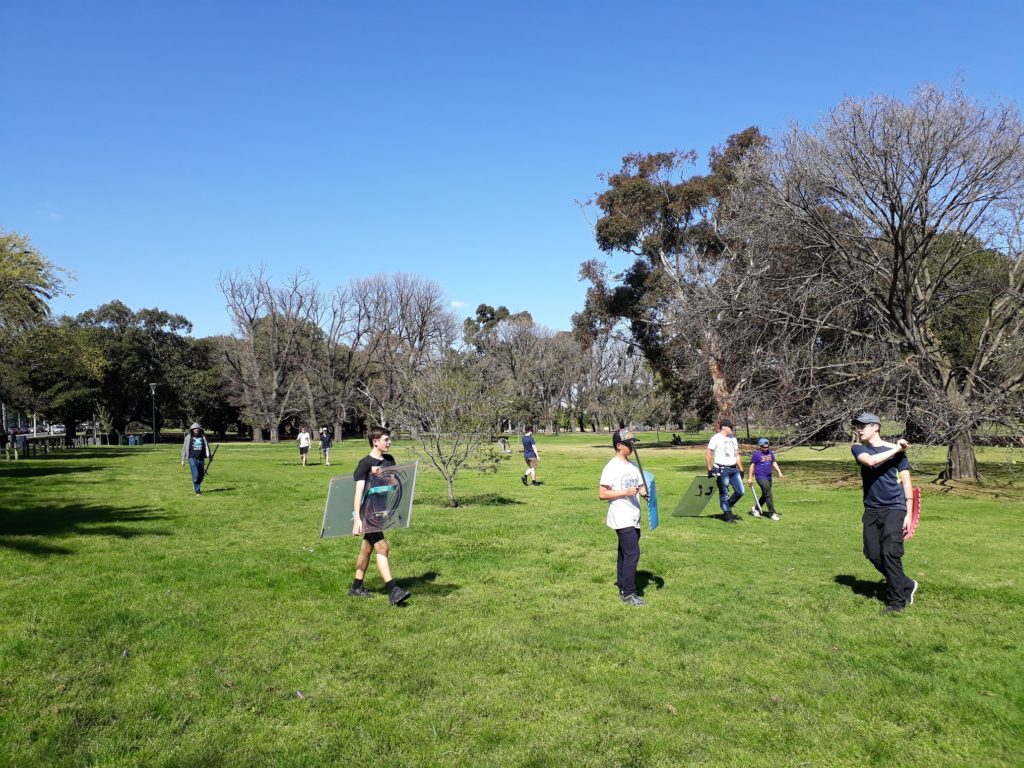 The first two rounds were simple Survival rounds, restricted to the tanbark area. The large Tank shields were not available for these rounds, so we relied on the multiple smaller ones available. As to be expected from a relatively small, mostly inexperienced human group, most early tags resulted from a lapse in situational awareness. With the small shields, single zombies presented much more of a threat than usual, and these factors sped up the games significantly. The humans who survived longer were those with better situational awareness and teamwork, capable of fending off multiple zombies at once without flinching. Naturally, as the horde grew in number, these humans too were overwhelmed. I was one of the last two survivors in the first round, but was tagged early on by the Husk in the second round.

The next two rounds were standard Survival rounds, using the northern half of the play area. With more players arriving throughout the first two rounds, we reached a player count that we felt was sufficient to use the expanded play area. In the first round, the humans largely stayed in a few large groups. These groups circled the play area, being picked away at by the slowly growing horde. I generally stayed away from these groups, joining them only when zombies reached threatening distance, and breaking off when an opportunity arose. As human numbers dwindled, I grouped up with a few remaining humans and we were able to survive together for a fair time. Eventually I was the sole remaining survivor.

In the second round, the humans stayed in several smaller groups. These groups were generally kept from linking up by precise zombie attacks, which though not necessarily effective, caused groups to constantly move apart. These smaller groups made for much easier pickings than a few large groups, due to relatively less firepower. I typically jumped between small groups as I felt appropriate, though was significantly more tired due to my last stand in the previous round. Eventually, the group I was with at the time was overwhelmed by zombies and I was unable to stay alive much longer, finishing as one of the last three survivors. 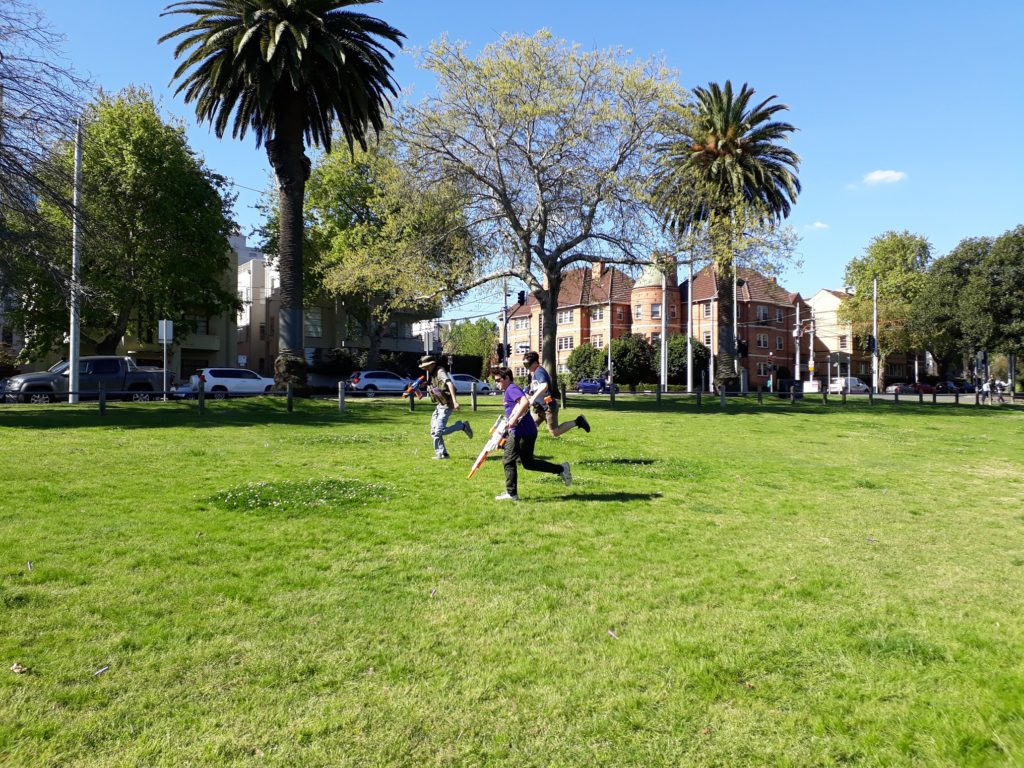 After the final stands in the previous two rounds, I was too tired to run, so elected to take on the role as a walking Medic zombie. For the next round, we played a Survival round with PvP rules active. From the start, the humans split into multiple small groups, and the zombies focused on one particularly small and nearby group. With the pressure of multiple zombies as well as me as a Medic zombie, this group was quickly overrun. As we approached one of the larger groups, one of the humans turned on them and stunned them, allowing us zombies to move in and get some easy tags. With the horde having reached a good size, and the humans already dwindling in number, the remainder were easily overrun and tagged.

The last two rounds were tanbark restricted Survival rounds, with a further decreased player count. The first round had PvP again active, and the humans quickly turned on one another. This of course made for very easy pickings for the zombies, and the few surviving humans were easily overrun. The second round did not have PvP, but had an even lower player count, with only 2 starting zombies, excluding myself, and about 8 humans. Without the use of the large Tank shields, it was difficult for the few starter zombies to get any tags, as they would be rapidly hosed down by the humans. As such, the first two or so tags relied entirely on the Husk catching out unaware humans. With a few more zombies in the mix, they were able to whittle down the human group at a reasonable rate. 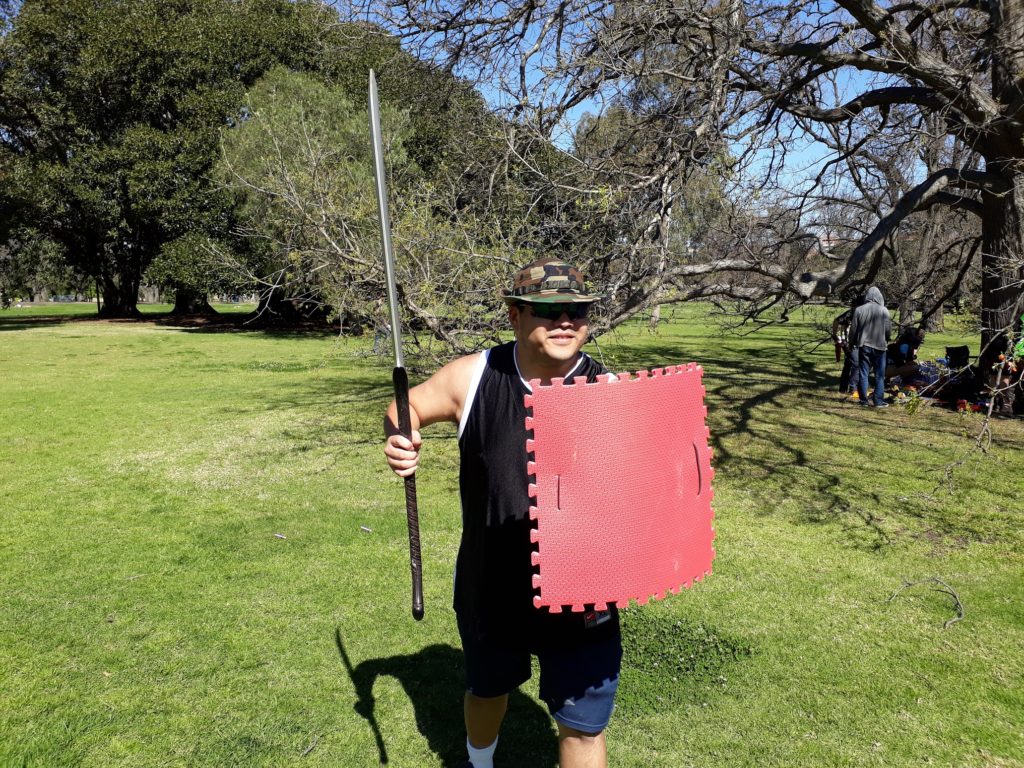 With such a low player count, I feel there are less tactics to discuss, and that it would be much more useful to discuss the two new/revamped zombie upgrades.

The first is the widespread introduction of small shields for zombies. These shields are large enough to cover a zombie’s torso, but leave their limbs and head relatively exposed. In addition, they are not especially wide and even the slightest flank maneuver will expose the zombie’s side. In a one-on-one between a zombie and human, these shields greatly improve the zombie’s odds. They are no longer forced to resort to defenceless head-on charges, and can approach humans with relative safety. With their limbs and head still exposed however, a fast-reacting human can adjust their aim and still have a very good chance at stunning the zombie before they get too close. This weakness is further exacerbated against humans with high ROF blasters. Likewise, small shields offer zombies little protection against multiple well armed humans, and they are still liable to being hosed down when within effective range.

Nonetheless, the small shields allow individual zombies to exert far more pressure on humans, especially smaller groups, than they would otherwise be able to. Barring full-size Tanks, there are no zombies that are remotely capable of challenging a reasonably armed and aware human. The small shields help to close this gap while still maintaining a human advantage. Throughout the event, there were numerous times where the moderate protection from a small shield was more than enough for a zombie to make a threatening attack, where without it they would have been easily hosed down at the start. I quite like the addition of small shields to supplement the few big shields and I think they will continue to be quite useful.

The extra pressure that a Medic zombie can exert on a small human group is immense. With even just a couple of zombies, the Medic zombie can put zombies back in play after 10 seconds as opposed to the usual 25. This can quite easily catch players off guard and unaware, often resulting in an easy tag or two. Against larger groups, or with larger groups of zombies, the Medic’s effect is a lot less noticeable. Larger human groups have the firepower to just hose down the newly revived zombie and Medic, while larger zombie groups gain much less from having a Medic reviving single zombies. Nonetheless, earlier on in smaller games, the Medic zombie can give the fledgling zombie group the boost they ned to get those crucial early tags.

Something that we quickly eliminated was the ability for the Medic to revive Tanks and Husks – putting these zombies back in play so quickly was far too powerful against a smaller human side. It was overwhelmingly powerful particularly with Tanks, giving the humans almost no time to recover and reload after stunning a Tank. Even without reviving these upgraded zombies however, with the low player count we had, the Medic zombie provided a little extra momentum for the zombies.

Despite the lower player count, we were able to have several good games, and try out a number of new things.