Author’s note: Thanks to Dart Zone for sending the free sample to review!

As I noted on social media, my sample Dart Zone Pro MkIII arrived Monday afternoon – realistically, too late to make a real review happen before the Wednesday embargo. Such is current shipping. In the meantime, before I take it to a war for better judgement, or attempt to feed multitudes of darts through it…let’s peek inside the MkIII and see what makes it tick! 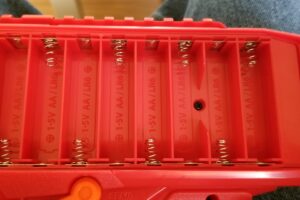 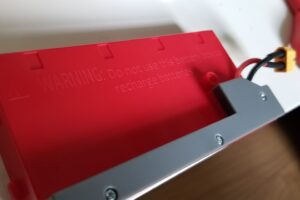 As was teased earlier in the week on social media, the battery tray is not only removable, but also connected via XT60! You can literally take out one screw, lift up the tray, and use a rechargeable battery in its place. The wiring is obviously overkill for 8AA batteries, but that’s hardly the point – in theory, there’s no need to rewire the blaster – assuming you’re not tearing things apart so much that it’s required. 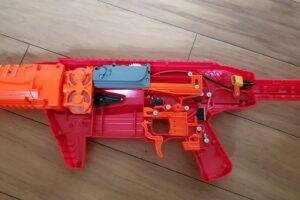 After lifting the left half away. 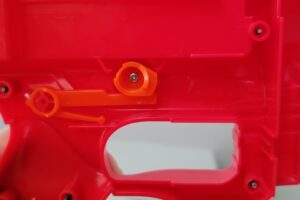 The clutch on the select fire lever. It also has a protrusion on one side. 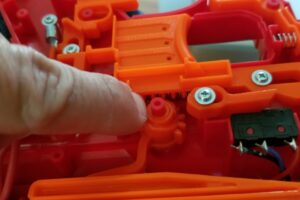 The pivot point of the pusher lever, which mates with the clutch. Yes, that's a geared pusher arm. 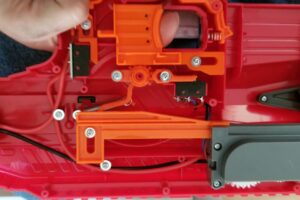 In semiauto, the trigger operates the pusher lever. The full auto switch does bot get depressed.

There were several considerations that had to be made for this mechanism to work. Space, keeping costs down, and the need to fire all dart lengths, for starters. The result is…interesting? I’m not sure I would’ve opted for this solution, but I suppose these days, with PCB manufacturing backed up, simple on that front may be better.

In any case, the rev trigger depresses a switch, as expected. What the firing trigger does is dependent on the fire select lever’s position. On semi-auto, it sits out of the way, letting you move the geared pusher arm (which moves quite a long way). A strange, orange piece of plastic, sitting above the trigger…just sits there. It’s close to a second switch, but doesn’t depress the contact.

When you put the blaster in full auto, however, two thigs happen. First, a clutch mechanism moves the pusher arm’s gear out of the way. It no longer makes contact with the gear track on top of the trigger. Second, a protrusion on the side of the clutch moves the mystery plastic piece forward.

Now, when the firing trigger is pulled, that lever depresses the switch, activating the motor circuit for the pusher. At this point, electronically speaking, you have a Rapidstrike. Although speaking of electronic pushers…

The pusher mechanism on the MkIII is a rack and pinion mechanism. There is a small gear train, designed to reduce the rotational speed from the motor (in exchange for torque, because physics). On the backside of the largest gear, which meshes with the pusher part of the time, there’s a track molded into the gear. That track is where the control switch is placed. The end result of this setup? You can mount the switch directly to the bottom of this PCB and make things more compact!

The circuit is relatively easy to follow, if you’ve ever messed with blaster electronics before.

Looking at the board, there’s also another interesting addition: there’s a capacitor in parallel with the battery. Technically, that capacitor starts charging (even if slowly) as soon as the batteries are installed. When you press the rev trigger, completing the circuit, the charge contained by the capacitor jump starts the flywheel motors, reducing spin up time. Yes, these are hobby 130s, with tabs on the back and venting holes for cooling. As to what kind of motors these are…I don’t really have a clue. But I’m sure at some point we’ll have more info. In any case, they can run on 8 AA alkaline batteries, and they have concave wheels attached.

The flywheels look similar to some kinds of worker wheels, with slightly concave rim and ridges.

As for the cage? Honestly, at this point, I’m lacking time and energy to delve further. I’m sure between other influencers’ posts and Friday (when I know I’ll have time for more extended testing), we can see if any existing cages match the mounting posts, or if we’ll need new cages for doing silly things. For example, there’s DEFINITELY room for having two stages of flywheels, but that would require removing the large muzzle. So a custom front end would be necessary.

In any case, the initial tests are promising on some fronts. On fresh AAs, I’m averaging 148fps with the included short darts, and about three and a half darts per second. On a 2s lipo, velocity drops to acceptable HvZ levels, and about three darts per second for the rate of fire. Finally, a 3s lipo returns the fps to stock levels, and gets the rof to a bit above 4 darts per second. Of course, on semi-auto, you can spam darts as fast as you can pull the trigger. In that case, the lipo will maintain flywheel speeds far better, simply due to the current available.

I have yet to delve into full lengths.

There’s certainly a weakness in regard to how fast you can spam darts: since we’re trying to maintain usage for full AND half length darts, and still using the “middle mount” adapters for short dart magazine, you have a minimum distance the pusher HAS to move. A hybrid pusher or even a swappable pusher arm, combined with a forward-oriented mag adapter, would have been best. Given the need for compatibility, though, this is what we have.

I’ve also seen jamming with some of the Talon magazines I have on hand. I will have to test more

Finally, my blaster is noticeably firing to the right, over the short distance that is my basement. I’ll have to open the blaster up again and make sure I didn’t accidentally misalign the cage when I put it back. Assuming I didn’t, though, something may need tweaked to correct that.

Tune in later this week for more! I should be able to battle test the blaster on Saturday, and post a full review on Sunday.