By most accounts, the Nerf N-Strike Elite Centurion has been somewhat of a failure in the Nerf community. While it’s “100 foot range” and ridiculous size made it a standout on store shelves, the reported performance of the blaster varied greatly. For starters, the range was inconsistent, and shots often veered in all directions. But to make matters worse, many users found the priming mechanism prone to jamming, and chewed-up darts were common. It wasn’t easy to modify, and the reverse-plunger mechanism was not in keeping with the newer, direct plunger system used in other Elite products. In short, the Centurion failed to live up to its hype, and frankly, we don’t know a single person who desired one, much less actually bought one.

The new-for-2014 Mega Magnus, then, has some “mega” baggage to overcome. But it does have one thing going for it—as soon as we saw one, we couldn’t wait to get our hands on it. Perhaps it’s the “big power in a little package” idea, or perhaps it’s just that it looks a lot less ridiculous than the Centurion with 85% of the (theoretical) performance. Either way, we predict the Magnus will sell a LOT better than the Centurion, simply based on size, price and perceived performance. But does it make up for the Centurion in justifying the existence of the Mega line, in general?

At over a foot long from end-to-end (13”, to be precise), the Magnus is a large blaster, without question, but especially so for a “handgun” or “pistol” style. This makes for an almost cartoonishly large presence, and brings emphasis to one of the Magnus’s most glaring ergonomic flaws—the handle is simply too small. Even if you don’t have gigantic man-hands, you’ll likely find that you only have a loose grip on the Magnus, which doesn’t inspire confidence. Moving around to the front of the Magnus is the huge, Space Battleship Yamato-esque muzzle opening, which is downright intimidating if you’re standing on the receiving end (we have visions of the Wave-Motion gun firing here!). Up top is where darts are loaded—3 at a time—into the body of the blaster. When the blaster is being cocked, a door opens up and darts can be squished down through a springy slot narrower than the darts themselves. Sliding the cocking handle (top of the blaster) forward again closes the door and primes the mechanism for firing. The downsides here are two-fold—the jamming of the darts into the chamber causes them to distort every time they are loaded (even if they presumably regain their shape), and when all three darts are loaded and the mechanism is slid forward, the blaster is tensioned and ready to fire… which is not how the blaster should be left if being stored. In essence, then, there’s not a practical way of storing all 3 of the stock darts in the blaster itself. Oh, and the Magnus is front-heavy, just like it appears.

Perhaps it’s the “big power in a little package” idea, or perhaps it’s just that it looks a lot less ridiculous… Either way, we predict the Magnus will sell a LOT better than the Centurion. 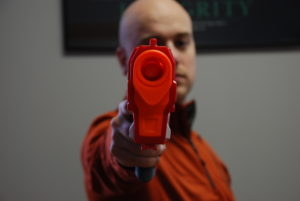 All of these details and gripes are relatively insignificant, however, if the Magnus performs as advertised. And here is its biggest failing. Shots are powerful-sounding and intimidating, but fail to live up to the claim of 85 feet. In fact, at a flat firing angle, our best shot was a mere 37′ 6″. And after repeated firings at various angles (20-30 degrees), we were unable to surpass a 51′ 10″ maximum distance (with the upper averages hovering around 50′). That’s more than 33′ shy of the claimed ranges. In addition, we ran into jamming issues more than once, and the reload process is a bit tedious. Nevertheless, the blaster is fun, just because it’s different. Maybe not as fun as the first time we banked a Vortex disc off a wall and hit an unsuspecting target around a corner, but still pretty cool. The whistling Mega darts seem to fly more slowly than their Elite counterparts, and as such, imply that they will hit with more weight and impact. This may not be true, and perhaps the “slowness” is simply a byproduct of simply being able to see them more easily (being large and red will do that). But they are still fun to watch, and the fear of the unknown makes opponents take pause.

Overall, though, we’re left with the impression that the Magnus does nothing to erase the Centurion’s shortcomings… the Magnus is still a bit unwieldy, most of the shots are of sub-par range, accuracy is no better than most Elite blasters, and it requires different darts than everything else. And we could keep going… darts are fiddly to load, the internal capacity is extremely limited, and the rate-of-fire is slow. Plus, we have to wonder how far the brand can be extended before market confusion becomes an issue (as it stand, the drill-down of Hasbro → Nerf → N-Strike → Elite → Mega → Magnus is 6 levels deep). But if you’re looking for a BFG (big freaking gun) that you can carry with one hand, well, it fits the bill. We’ll give it that.

All things considered, the Magnus doesn’t make a significantly better case for the Mega line than the Centurion. It’s not practical in battle, the performance is surprisingly poor, and it has a few issues with ergonomics and use. We still give it props for the “intimidation factor,” but there’s just no way to excuse performance that can’t even match that of a Jolt or Triad. In short, the Magnus doesn’t do enough to justify the existence of the Mega family as a whole, nor even enough to recommend individually. Consider us disappointed, and wondering where the Mega product range will go from here.