The Water Warriors Colossus 2 from Buzz Bee Toys is, as its name would imply, a follow-up to the first-generation Colossus released in 2012, the original version of which was one of the biggest water blasters to ever hit the market. Both that original Colossus and this second-generation model are unique in having an individual air pressure chamber, a 3-position nozzle, huge water reservoirs, and a claimed range of 40 feet. They also share controversial styling, questionable ergonomics, and a few gimmicky features.

There’s no question that in the eyes of many consumers, “bigger is better.” And with packaging that boldly proclaims “Blasts up to 40 ft.; Holds up to 74 oz. of water; Around 6 ½ pounds when filled,” Buzz Bee is banking on superlatives to make the Colossus 2 the king of the water blaster jungle. But when you go beyond the marketing bullet points, does the big boy actually deliver?

If there is one thing that Buzz Bee water guns are known for, it’s air pressure-based blasting. Once the calling-card of the Super Soaker line with their original 50 and 100 series blasters, since 2003 Water Warriors has been the go-to brand for air-powered drenching. It’s no secret that the current owner of the Super Soaker name, Hasbro, and the parent company of Water Warriors, Buzz Bee, have a bit of a complicated history, with many former Super Soaker engineers now designing products for Buzz Bee. And truth be told, the engineering talent at Buzz Bee is perhaps no more apparent than in their Water Warriors line of products, with the Colossus 2 apparently looking to put an exclamation point on that fact. With a singular air pressure chamber mounted up-front near the priming handle, it’s clear that this blaster makes no bones about its air pressure heritage.

Since the Colossus 2 is powered by air pressure generated by its pump, output is directly related to pumping frequency (the higher the number of pumps, the higher the shot velocity, accuracy, and range). Compared to some of Super Soaker’s battery-powered designs, the Colossus 2’s manual pumping can feel a bit antiquated, but we like not worrying about batteries, and we do enjoy the feeling of getting as much out of the blaster as we put in. To that end, getting the most from the Colossus 2 will be somewhat less than intuitive to first-time users (and, quite likely, completely over the head of most children who would use this product). As described on the back of the Colossus 2 box, “For maximum performance, pre-charge by pumping the handle 10 to 12 times BEFORE adding water.” This pre-charge routine enabled us to reach respectable (if not record-breaking) 38-foot distances on a day with a light breeze. Without pre-charging, we weren’t able to reach much beyond 32 feet. In neither case were we able to hit the full 40 feet proclaimed on the box, but on the right day with just the right angle, it may be possible.

“In place of the angle meter, we would have loved to have seen a pressure gauge of some type. It’s easy to forget how many times you’ve pumped the handle, and having a gauge would be handy for both novices and veterans alike.”

Speaking of angle, the Colossus 2 comes with a built-in “Angle Meter,” which uses different colors to indicate when the blaster is being held at an inclination that will give the best shot distance. It’s a clever, if somewhat gimmicky means to help new or younger users get the most out of their Colossus 2. But for all but the most novice of water gun users, it will be completely unnecessary, and with its mounting point on the side of the blaster where it’s not easily seen, it will also be quickly forgotten. In place of the angle meter, we would have loved to have seen a pressure gauge of some type. It’s easy to forget how many times you’ve pumped the handle, and having a gauge would be handy for both novices and veterans alike. 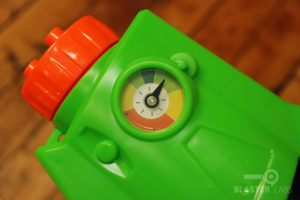 Visually and ergonomically, the Colossus 2 is an imposing blaster. It weighs in at over 2 feet in length and sports a reservoir that can hold 74 ounces of water—a full 6 ounces more than a 2-liter soda bottle! Despite its size, we didn’t get the feeling the Colossus 2 was particularly overwhelming to wield and operate, though we could see younger users struggling a bit with its length and especially with its heft (this is, no doubt, why the Colossus 2 is recommended for operators of at least 8 years of age). The three adjustable firing nozzles are a nice touch, and although switching between them does not really change the gun’s output in any significant way that we observed, it’s a fun and easy-to-use feature. And while we found the Colossus 2 to be a bit aesthetically challenged (as we do with most of Buzz Bee’s past and present designs, if we’re being honest), and we also wouldn’t say the plastic quality is yet of Nerf-caliber, we nonetheless were impressed by one particular design feature—the Colossus 2 absolutely refused to leak water. And after having just tested a Super Soaker product that dribbled more than a Harlem Globetrotter, this lack of unintended water leakage from the reservoir (or otherwise) was a definite plus. We simply don’t know why it’s so hard for Hasbro to include a valve on their reservoir caps. Kudos to Buzz Bee for doing so.

One area of the Colossus 2 that did concern us a bit was the prospect of durability and long-term reliability. Right out of the box, the Colossus 2 made very unpleasant screeching noises with each pump of the priming handle. We thought it was perhaps due to lubrication not having been fully spread, and that things would improve with use once the priming handle had been pumped a few times. But for the duration of our testing, the irritating noise did not subside, nor did it improve even slightly. Given that Buzz Bee recommends 10-12 pumps per shot for maximum distance, this screeching sound became quite irritating, and made a few of our testers question the blaster’s long-term durability. It also, unfortunately, took the fun-factor down a notch, as no one likes a blaster that’s noisy and sounds like it’s falling apart. 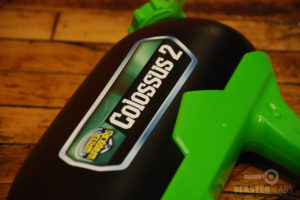 On the plus side, the huge tank of the Colossus 2 made from longer than average play times, and we found it possible to keep the stream flowing with a break by simply holding the trigger and pumping continuously. This did not result in the furthest shot distances, of course, but it did result in a non-stop stream of water that looked impressive and would no-doubt prove to be of benefit in actual water warfare.

In short, if you have an original Colossus, we can’t see a good reason to upgrade. But if you’re looking for something new, and you want the biggest, baddest, most intimidating-looking water blaster currently on the market, it’s hard to go wrong with the Colossus 2. It looks the part, and the huge water reservoir keeps refills to a minimum. The slightly smaller air tank versus its predecessor didn’t hinder it significantly, even if the overall size of the Colossus 2 might have you hoping for even greater performance. Just make sure you follow the pre-charge pumping instructions and don’t expect the overall performance be quite as colossal as its name would imply, and you’ll be pleased with what the big Colossus 2 brings to your backyard water warfare game.