We made no secret of the fact that one of our favorite experiences at Toy Fair 2014 came from our time with the folks at Zing Toys. Among all of the products we got to try out at their booth, there was one item in particular that impressed the heck out of us—the humble Sky Ripperz rockets with Rip Zip launcher. This modestly-priced toy is claimed to have a 250’+ firing distance, with nothing more than a pull of a bungee loop and a flick of the wrist for propulsion. Naturally, we could hardly wait to verify this ourselves.

With summer finally upon us, and a holiday weekend at-hand, the arrival of a small package from our friends at Zing earlier this week came just in time. Here, finally, was our chance to test out the Sky Ripperz for ourselves. And we’re happy to report, the Sky Ripperz and Rip Zip Launcher is everything we had hoped, and more. In fact, it could be the most fun we’ve had with a toy this simple in a very, very long time!

We acknowledge the Zing “Blast Off” products (of which the Sky Ripperz is a member) are not blasters or toy guns in the traditional sense, and they skirt the border of the type of products we typically cover. However, we could very easily see the Sky Ripperz, in particular, serving as a type of long-range mortar in a backyard Nerf war, so we’ll give it a pass. And truth be told, even if it was never used in that manner (and Zing wouldn’t recommend you do), it’s such a fun product in its own right that it would be a shame for us not to give it some coverage. 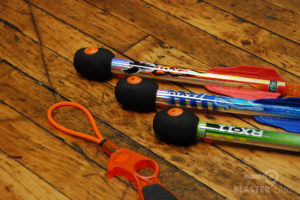 At the risk of oversimplification, Sky Ripperz consists of a bungee-type, looped-elastic Rip Zip launcher, which one holds in his or her non-dominant hand, partnered with a hollow-bodied rocket fitted with a foam tip and fins. The rocket has a very effective whistle embedded into the foam tip, and a plastic hook at the base of the tip, into which the looped elastic cord is placed for launching. A small thumb and finger grip is attached to the tail of the rocket, which is the grab-point. One simply places the hook of the rocket into the elastic band, pulls back on the rocket while holding the launcher in place, and flings the rocket forward with a snap of the wrist.

We found the proper launching procedure to be somewhat similar to casting a fishing line—i.e., it’s all in the wrist. While the elastic cords themselves provide decent forward momentum on their own, it’s the wrist-action that provides an exponential increase in shot distances. This technique was intuitive to some of our testers, but not to others. Some of us were able to master the process almost immediately, while others fumbled with shots that went straight into the ground, or that sputtered out in less than 30 feet. We expect that that “8+” age recommendation on the packaging has as much to do with this rather careful launch procedure as it does with safety.

“Slowly but surely, we eclipsed the 250 foot mark, with shots climbing toward the mid-270 feet range, and eventually, all the way up to an astonishing 295 feet!”

But once the launch technique was mastered, the Sky Ripperz did everything we asked of them—and then some. The Sky Ripperz packaging claims “Flyz [sic] up to 250 feet!” At first, we came up short, hitting distances of roughly 225 feet—impressive, to be sure, but not quite living up to the ranges we expected (much less the “football field” claims we heard at Toy Fair). But before long, we saw those distances increasing, eventually reaching 245 feet. But we knew we could get the Sky Ripperz to go even farther, so we headed to a high spot on our test field, and put the wind at our back. Slowly but surely, we eclipsed the 250 foot mark, with shots climbing toward the mid-270 feet range, and eventually, all the way up to an astonishing 295 feet!

But it wasn’t just the distance that was eye-opening, the sheer accuracy of the Sky Ripperz was also pretty incredible. We could hit shots dead-on accurate from over 100 feet away, with very little practice at all (at least indoors, where climate factors were negated). Over a longer distance, it was a little harder to keep the rockets on track, but nothing like the fish-tail craziness of a typical foam dart. With some practice and calm winds, we expect we could easily hit targets from more than 100 feet away with relative ease.

Normally, when we’re testing out blasters, attempting maximum distances and measuring accuracy is a bit of a chore… load darts, prime, aim, fire, measure, repeat. And to be sure, this process wasn’t much different procedurally, but it was a heck of a lot more fun. When firing a blaster, most of the distances are due to springs, flywheels or other mechanisms that aren’t directly controlled by the user—it’s usually just a matter of hitting the right angle. But in the case of the Sky Ripperz, the distances are a direct result of the user’s mastery of the product itself. You want a straight, long-range shot? If you’re good enough, you can make it happen. And when you do, there’s a huge sense of reward. 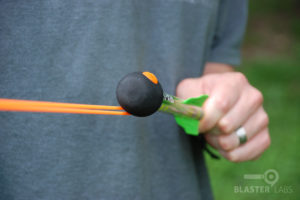 What didn’t we like? Very little, actually. The Sky Ripperz do have a bit of a “Dollar Store” feel in their overall aesthetic, and we did have a fin from one of the rockets break off during testing (actually, it didn’t so much as break, as the glue simply failed to hold it in place when it collided with an object). But fortunately, the rocket still flew, though without as much distance or accuracy. So while we wouldn’t say the Sky Ripperz are the best-looking or the most well-built products we’ve ever tested, for the price, the look is acceptable and the overall durability was still reasonably good. We would also say that in overall ease-of-use, the placement of the rocket on the elastic band requires take a steady hand, and some patience may be required from users in getting the knack for launching rockets successfully. And we’d be remiss if we didn’t mention the fact that the sheer velocity of the rockets in flight combined with their relatively high mass made them moderately dangerous projectiles. We wouldn’t want to get hit in the eye, throat or any other soft spot by one of these rockets, so we wouldn’t suggest aiming them at people (this isn’t so much a design flaw as it is an inherent danger of anything with this type of performance potential).

Our overall verdict on the Zing Sky Ripperz is a direct result of the fun we had with the product. Put simply, they are a fantastic buy—a bargain for the performance potential, and a heck of a lot of fun for all but the youngest among us. No, they will never replace a proper blaster, nor are they designed to do so. But if you’re looking for something that will keep you entertained for hours, and will give you a visceral thrill and perhaps even a bit of exercise in the process, you’d be hard-pressed to find anything more impressive than the Sky Ripperz. Frankly, just talking about it makes us want to go out and play with them. They are everything we had hoped, and more.