A couple months ago, we gave a fairly gushing review of the Buzz Bee Air Warriors Extreme Air Max 6, a moderately-sized air-powered blaster that was really fun to use. It was a welcome change-of-pace from the spring and flywheel-based models we typically test, and pumping the blaster provided a very tactile, engaging experience that is absent in the competition’s models.

Unfortunately, in our attempts to reach the distance claims advertised by Buzz Bee, we ended up breaking the pump handle in our sample, which negatively impacted our review. The folks at Buzz Bee advised that their customer service team has never had any reports of this issue, and they were kind enough to send us another sample of the Air Warriors Extreme Air Max 6 for our own use, even though the review had already been posted. We thought it appropriate, therefore, to update our readers on our experience with this second example.

After having used this new sample for several weeks now, we’re pleased to report that nothing on this new unit has broken or failed to function properly. So, based on Buzz Bee’s own internal reporting as well as our experience with this second production unit, we feel reasonably confident in saying that the broken pump issue with our first unit was an anomaly that is not likely to be experienced by the majority of consumers.

“…we hit a nearly identical 57 foot maximum range—within a foot of the original review sample! And, just as before, the shots were super accurate, had little to no fish-tailing and hit harder than typical Nerf Elite-type darts.” 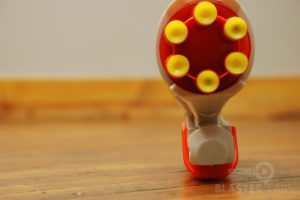 To take this vote of confidence one step further, we conducted our usual battery of tests on this second Air Max 6 sample, and were astonished to find that we hit a nearly identical 57 foot maximum range—within a foot of the original review sample! And, just as before, the shots were super accurate, had little to no fish-tailing and hit harder than typical Nerf Elite-type darts. Interestingly, as much as we love these Extreme Darts from Buzz Bee with their denser, stiffer foam bodies, when we tried a few Super Darts sent to us recently from Prime Time Toys, we were surprised to find we were suddenly able to hit distances of up to 75 feet! That’s a nearly 20 foot difference, just by changing dart types. But the trade-off was that the Super Darts didn’t form as tight of an air seal in the Air Max 6 as the packed-in Extreme Darts from Buzz Bee, so there was less of an audible “pop” when fired, and the shots didn’t seem to hit with as much force. So, if it was up to us, we would probably stick with the stock darts from Buzz Bee. But you can be sure we’ll be taking a deeper look at the Super Darts from Prime Time again in the future.

Getting back to the Air Max 6 itself, we’ll re-affirm that this is a very nicely performing blaster that is fun to use, functions nearly as well as advertised, and is a good value for the money. However, there is still one, niggling issue… although nothing has broken on this new sample to-date, we did notice the black plastic insert in the handle of the blaster felt less than solid. While priming the Air Max 6, our testers felt a slightly movement in the back part of the handle opposite the trigger that again caused us to lose confidence in the overall build quality. Now, we want to reiterate that nothing actually broke, and we’re admittedly being somewhat nit-picky and perhaps even hyper-sensitive here, given our previous experience. Nonetheless, it’s just not the type of thing we normally feel in similar, competing products, so it would be our preference that it not exist here, either. 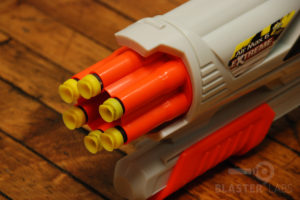 But we don’t want this one, minor quibble to overshadow there inherent goodness we found in the Air Max 6. And we’d especially like to thank Buzz Bee for making a second sample available for our team to test and use, as it delivered just as much air-powered fun as our original unit. We hope and expect Buzz Bee will continue improving their design and craftsmanship, as we’ve found the overall functionality of these blasters to be very competitive. So much so that, for the money, we wouldn’t hesitate to recommend the Air Max 6 to our friends and family… or even pick-up a few more, ourselves.