Every now and then a blaster comes along that redefines your expectations of how a modern foam-launching toy gun should look, feel and operate. And while the Buzz Bee Air Warriors Extreme Air Max 6 is not the largest, nor most expensive product in the “Extreme” product line-up from Mt. Laurel, NJ-based Buzz Bee Toys, it may nonetheless prove to be one of the most enjoyable.

There have been no shortage of flywheel, spring and plunger-based foam launchers from Nerf and other companies in the toy blaster category of late, but true, air-powered models are becoming something of a rarity (the Nerf Unity Power System being a single, aging exception). It was with some excitement, then, that in addition to the air-powered, pump-action Range Master sent by our friends at Buzz Bee, we also were sent the considerably smaller Air Max 6. And like venerable trope of Goldilocks and her three furry friends, we quickly came to find the Air Max to be neither too large, nor too small, but altogether quite right. 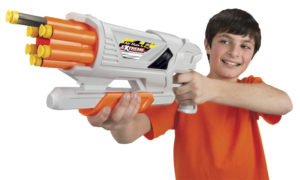 While the Buzz Bee Range Master we tested recently is a bit of a brute—it’s large, can only handle a single shot at a time, and generally looks like it’s trying to be something intimidating—the Air Max 6 is more subdued. Its smaller size makes it much more approachable, while also aiding in close quarters maneuvering. We also like the futuristic-looking lines of the Air Max 6, which has considerably fewer “melted”-looking elements than the Range Master. Indeed, we like the overall look of the Air Max 6 quite a bit, and feel the large swaths of gray plastic work much better at this scale. We’re still not thrilled at the lack of surface detailing, or the use of stickers (on just one side, no less) instead of more painted details, but it has a generally pleasing and balanced look, overall. The 6-shot front barrel looks menacing, and we like how the overall size of the blaster is proportional to the muzzle. The open cavity right in the center of the muzzle is a little weird looking, but it doesn’t detract from the generally pleasing aesthetic.

Ergonomically, the Air Max 6 is a success, as well. The trigger and grip both feel appropriately-sized, and the pump handle falls easily to hand. The pump itself functions as one would expect, and gets increasingly firm as pressure builds. Six Extreme darts are included, and this pleases us to no end—these are among the best darts being made right now, being both accurate in flight and easy to reload. And we love that they are still suction-tipped.

Six Extreme darts are included, and this pleases us to no end—these are among the best darts being made right now, being both accurate in flight and easy to reload.

The Air Max 6 was no slouch on the performance front, hitting 32’ with only 3 pumps and no elevation. Giving a slight angle improved distances to the mid-40’ range. Moving to 6 pumps, we hit 38’ flat, and into the high 40’ range with an arc. With a full 9 pumps got us up to 40’ flat, and up to 52’ feet with an arc. All told, however, we found 5-6 pumps to be sufficient, with solid mid-40’ ranges easily repeatable, though we did have a misfire typically once every six shots. And while the overall range was just shy of what we achieved with the Range Master, the rate-of-fire was considerably better, thanks to the auto-indexing barrel and easier ammo loading. In short, the Air Max 6 performed well, and shot relatively quickly for an air-primed model.

Unfortunately, however, our time with the Air Max 6 was somewhat limited. In our attempts to hit the 60’ distance claimed on the box, we did a full 10 pump cycle (similar to what we did with the Range Master), which earned us our max 56’ distance, but at the same time, resulted in an audible “snap” that told us this would be our last attempt. A small piece of plastic that connects the priming handle to the internal pumping mechanism had broken, and the handle now moved freely without priming the blaster. We reported the incident to our contacts as Buzz Bee, and were assured that they have not, to-date, had any complaints about the handle breaking since the blaster was originally introduced in 2012. In addition, we were advised that when a consumer has an issue with an item, they can call Buzz Bee’s 1-800 number and speak with a customer service representative that will help them with the issue. So, while we were not particularly rough with the blaster (no more so than we are with any blaster put through our tests), we will give Buzz Bee the benefit of the doubt and assume this was merely a single, defective sample.

It’s unfortunate we had a problem with our Air Max 6 review sample, because we rather like the fact that there aren’t dozens and dozens of internal gears, levers, springs and other parts that could potentially malfunction. This is in stark contrast to typical Nerf blasters of late, which are so complex that any potential problem is quite often impossible to repair. This complexity also removes an element of physical interaction that is a strong point of the Air Max 6. Pumping the handle and feeling a firm, hard-hitting shot smack a wall (or another player) is exhilarating every time. Battery-powered contraptions are still fun, but air power just feels more primal… more visceral.

This combination of real, air-pump action, good performance, and practical size is what makes the Air Max 6 unique. It’s true that the pump action renders the Air Max 6 somewhat less practical in a firefight than many other choices due to its relatively slow rate-of-fire, and yes, we had to ding the overall score of the Air Max 6 somewhat due to the lack of aesthetic refinement and one unfortunate quality issue. But apart from those niggles, we found the Air Max 6 to be a real joy to use. There’s something to be said for manually pumping a blaster and seeing that effort result in a powerful, hard-hitting shot. In a world of battery-powered and increasingly complex foam dart blasters, it’s sometimes nice to return to the basics. And to discover that this more primitive technology can still keep pace with more modern designs, that just makes blasters like the Air Max 6 even more special.