Here at the Blaster Labs offices, we have a little game we play called “cup.” It’s a completely juvenile form of entertainment that is NOT approved by any toy manufacturers, the FDA, Michelle Obama, your mother, or anyone else. It involves a foam dart or disc blaster of your choice, a single plastic cup, and one pair of optional safety glasses. We’re not going to tell you how it’s played, because we don’t want a lawsuit. But suffice it to say, you don’t want to be the one to have to wear the glasses.

We share this brief departure into “not-entirely-safe things to do with foam blasters” for a reason. And that reason is to introduce you to the Buzz Bee Range Master, our new king of the “cup” game—a contest where accuracy is everything.

The good folks at Buzz Bee Toys were kind enough to send us a number of products for review recently, and the Air Warriors Extreme Range Master, although far from being a “new” product, immediately found a few fans among our staff. This 3-foot long, pump-action “sniper rifle” was, round after round, more accurate in our cup game than anything we tried in the Nerf Elite, Nerf Zombie Strike, and Nerf Mega product lines. There’s a very specific reason for that accuracy, but first let’s take a look at a few Range Master basics.

The Range Master is part of the Air Warriors Extreme line of products from Buzz Bee, which can be considered a competitor to the Nerf Elite range. The Range Master itself has existed since 2012, and sells for approximately $19.99. And although Buzz Bee’s Air Warriors products are no longer available at Toys “R” Us, our source at Buzz Bee confirms they “still sell to all the other major [retailers],” which include Wal-Mart, Target, and K-Mart.

When we first received our Range Master, we took note of the packaging colors and design, which were bright and exciting. However, with the product exposed and in several “do-it-yourself” pieces, there was a distinctly “toy-like” vibe versus a typical Nerf product that often comes in a fully-enclosed box (with the notable exception of some special-edition, store-exclusive models like the Stryfe CS-18 Mission Kit, which places an emphasis on the inclusion of additional tactical elements). 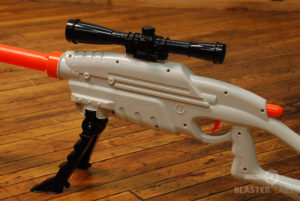 Packaging impressions aside, the initial reaction to the Range Master once we took it out of the box was… not good. The molded plastic on the Range Master looks and feels cheap—there is little texture or modeling, and the overly-smooth surfaces feel incredibly generic and lacking in thought or effort. The absence of detailing on the side of the blaster that doesn’t face outward in the box also gives it a very generic feel—there are large swaths of gray plastic and screw holes, and not much else. A few stickers on one side take the place of painted elements.

Of the included accessories, we found the huge barrel extension to be a laughable cosmetic addition that does little other than allow a “3 Feet Long!” claim on the box. The Nerf Longshot-style foldable bipod is comfortable when closed and can be detached easily, but does leave a large hole at bottom when removed. The shoulder stock is very short and is non-removable. On the plus side, the scope is detachable and has a slight downward orientation, which encourages an upward firing arc to improve ranges. All told, the accessories do work to create more of a “sniper rifle” feel to this toy, though with proportions and design choices that keep it aesthetically well below the levels of Tek Recon products, or even that of a typical Nerf blaster. It’s almost as if someone took a blaster from another manufacturer and put it in an oven for an hour, and this is the result… all of the details disappeared, all of the colors faded away, every corner became rounded, and random elements ballooned and became more bulbous than necessary (except for the scope, which is almost oddly realistic-looking compared to everything else).

Ergonomically speaking, we would agree with others who have noted that the trigger guard on the Range Master is a little oversized. But on the plus side, the bolt-action is exactly how it should be, in the sense that your left hand is holding the heaviest part of the gun while pushing it against your shoulder for stability. And although we didn’t care for the overall aesthetics of this particular blaster, and the overall materials quality might not be as good as some competitors, the priming bolt itself felt durable and well-made. 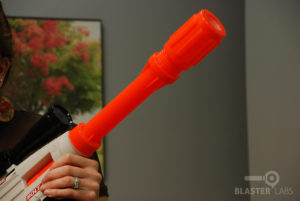 Cosmetic and ergonomic issues aside, the really interesting part of this blaster is how it works, and likewise, how it performs. First, the Range Master uses an air pump versus a spring. Second, it’s a “bolt action,” both in dart loading and in priming—the bolt acts as both. Once a dart is inserted, the same bolt handle is used to prime the blaster with a forward and aft motion. When fully primed, the Extreme darts shot out of the blaster with surprising force, eliciting a very audible “pop” when fired at a wall. We found that with 4 pumps, we could hit roughly 45-55 feet, with 6 pumps we could hit 50-58 feet, and with 10 pumps we could hit 54-59 feet. Our maximum range occurred with 12 pumps, at which point we hit an impressive 65 feet. Additional priming yielded no additional distance gains… we would assume there is a pressure release valve at work, preventing any damage to the blaster (or an end-user). And since priming takes time, we would recommend 4-6 pumps in most situations. But either way (and unlike many Nerf products we’ve tested), we are pleased to confirm that the claims on the box are correct—the Range Master will indeed allow for “Blasts up to 60 feet!”

“…the Range Master has one very special ace up its sleeve—it’s incredibly accurate. How accurate? How do 3-6 inch dart groupings from 60 feet strike you?” 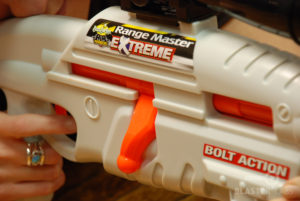 Now, most experienced blaster enthusiasts will note that 60 feet isn’t terribly special in terms of ranges, when most Nerf products these days will reach that distance, if not further. However, the Range Master has one very special ace up its sleeve—it’s incredibly accurate. How accurate? How do 3-6 inch dart groupings from 60 feet strike you? Those are the kinds of spreads we were seeing, firing after firing. In addition, the darts didn’t bounce or veer off trajectory like a Nerf Elite dart will often do. The secret is in the Range Master’s stiffer, denser foam dart material.

After some thorough testing, we found the Buzz Bee Extreme darts to shoot with repeatedly high accuracy. There was one consistent difference throughout our tests, however, and that was a faster drop in the black-bodied Extreme darts’ range compared to the other darts (whether from Buzz Bee, Nerf, or Zuru). We believe this is simply due to the Extreme darts’ higher density and mass. At high velocities, this could be considered an advantage, since that additional mass helps cut through the air rather than allowing air to manipulate the dart’s trajectory. We found the same to be true when using Extreme darts in non-Buzz Bee products (basically, any Nerf blaster with an open barrel is compatible). What we have, then, is a trade-off: the Range Master isn’t able to achieve the same ultimate ranges as other blasters, but the ranges it does hit, it will typically hit with more accuracy. And this is why in our “cup” game mentioned earlier, it quickly became a favorite.

We won’t make excuses for the issues we took with the Range Master’s aesthetics and build quality. Nor will we say this is a blaster for competitive matches where a high rate-of-fire is important. However, we will give our stamp of approval to Buzz Bee’s superb Extreme darts, particularly if accuracy is at all important to your style of play. And we will also say that the Range Master’s pump-action is unique and fun to use in certain situations. In fact, in a game like “cup” where accuracy is far more important than range, rate-of-fire, or ammo capacity, a blaster like the Buzz Bee Range Master is a practical, economical choice. It’s probably a safer option, too, since you’re much more likely to hit where you’re aiming than you are with other blasters. And to us, that pretty much defines a great sniper rifle.