Although generally seen as impractical outside of movies and video games, the ability to “dual wield” (use two weapons at once) has nonetheless been a much sought-after capability rarely found in foam-based blasters outside of complicated and noisy battery-powered models. In fact, the only other non-battery powered, single-handed blaster in the entire Nerf arsenal to-date is the Toys “R” Us exclusive Snapfire 8.

It was with no small amount of anticipation then that the Nerf Zombie Strike Hammershot (and its re-shelled twin, the Rebelle Sweet Revenge) came to market in August of 2013. And, like many reviewers before us, we’re pleased to confirm the Hammershot meets or exceeds those expectations for a one-handed wonder. It would be notable even if the Hammershot’s single point of distinction was it’s ability to be primed and fired one-handed. But fortunately, it’s a very well-rounded blaster in other regards, as well. 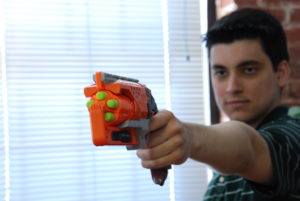 The Hammershot is a great looking revolver, adhering to the Zombie Strike aesthetic with a faux, wood-wrapped handle and graffiti-like “Z” logo. It also has well thought-out surface detailing and appears to be solidly constructed. And, unlike our Mega Magnus, there doesn’t appear to be any sloppily-applied paint or “one side looks nice, one side looks plain” shenanigans going on, either. It has the usual handle-mounted strap point, as well as an opening under the cylinder chamber that could potentially accommodate larger strap hooks. There is a single tactical rail on top which would be useful for attaching the ammo holder from the Barrel Break IX-2, for instance.

And why would one want to attach an ammo holder? Because the Hammershot is only capable of holding 5 rounds—1 fewer than either the Maverick REV-6 or the Elite Strongarm. It’s a good thing, then, that when the hammer isn’t cocked, the barrel moves freely for easy front-loading, and it will accept the included Elite-style Zombie Strike darts, and also just about any standard Nerf dart except streamlines. This makes it a perfectly acceptable alternative to other sidearms like the Maverick and Strongarm—especially when one considers the one-handed priming ability. But do note that some users have reported the open muzzle (vs. the Strongarm) could affect carrying ability with certain gear.

This makes the Hammershot a perfectly acceptable alternative to other sidearms like the Maverick and Strongarm—especially when one considers the one-handed priming ability.

In actual use, most Nerfers will find the Hammershot to be much better balanced than other revolver-style blasters. And the hammer action is long and a bit stiff, but basically second-nature. It should be noted, however, that the air restrictor slows the forward motion of the hammer, delaying full range shots slightly. Fanning the hammer does speed-up the rate-of-fire, but with a dramatic decrease in range—maximum range is possible only when the mechanism is fully cocked.

Speaking of range, and unlike some other reviewers, we found the Zombie Strike Hammershot to be a very solid performer. Fired flat from shoulder-height, we averaged distances of 50-53 feet. With a roughly 30-degree arc, we had no problem hitting the upper-60 foot range, with a max of 69 feet. Our rate-of-fire was 6 shots in 5 seconds, noting that the reloading times were slow, as was the hammer return. Accuracy seemed to be on-par for any other Elite-series blaster, which is to say “ok,” but not great (particularly in comparison to some Buzz Bee blasters we’ve tested recently—more on that, to come).

It’s nice to occasionally have a product in for review that fully lives up to expectations, and perhaps even exceeds them. The Hammershot looks great, is really fun to use, and has a genuine advantage to other blasters in certain situations. We had zero problems with reliability, and the performance was on-par or better than most other Elite blasters we have on-hand. There are certainly situations in which the Hammershot will be outgunned and outclassed. But as a sidearm, or as a blaster to play-out your dual-wielding fantasies, it lives up to its billing.