Though fun in its own right, this one flies in the shadow of another great Zing product.

By now, most of our readers know we’re huge fans of Zing Toys. From our initial eye-opening experience with them at Toy Fair, though our quick look at their unique X6 Zoom Rocketz Launcher, all the way to our highest-scoring product review to-date, the Sky Ripperz, we just can’t get enough of the fantastically simple, high-performing products from Zing. So this time around, we thought we’d give their Sky Gliderz a try.

The Sky Gliderz share a lot in common with the Sky Ripperz we just reviewed, mostly notably the same primary launch mechanism: the Rip Zip Launcher. Essentially a simple bungee-type launch loop mounted to a plastic handle, this uncomplicated device is the “secret sauce” behind the Sky Gliderz, giving them much of the same performance potential as the Sky Ripperz, but with more of an emphasis on aerial acrobatics than all-out distance.

At roughly $15 for a launcher and two, soft-foam gliders, the Sky Gliderz are roughly the same price as a three-pack of Sky Ripperz, making them a slightly less compelling value proposition, particularly given that the Sky Gliderz are prone to getting stuck in trees. But more on that, in a moment. Each of the Sky Gliderz planes is identical apart from color (one red, one green), and is made of a very soft, foam-type material, with a plastic spine in each wing to afford some level of adjustability in flight characteristics. Each is also equipped with a whistle toward the nose of the glider, which provides an auditory cue for tracking the gliders’ flight paths. The Sky Gliderz are recommended for children 8 years of age, and older. 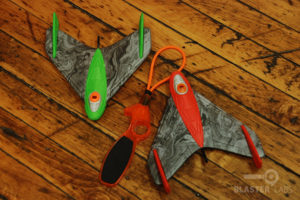 We tested out the Sky Gliderz both in a mostly tree-free local park, and in the backyard of a moderately wooded 1-acre residential property. At the park, the Sky Gliderz exhibited all manner of looping, curving, arcing, high-flying fun that we expected, though with wildly inconsistent flights from shot-to-shot. Some of the launches went straight into the ground, some went into high-flying loops, some went sideways, and some went into a nearly-straight spiral. As printed right on the Gliderz themselves, we did find that bending the wings affected trajectories, though we were unable to get consistent results regardless of what we tried in regard to launch technique or wing adjustment. Not that this diminished the fun that much, as each shot felt “new,” with no real way of knowing what kind of flight path to expect. But that inconsistency also became a problem.

In our backyard testing scenario, the Sky Gliderz exhibited the same spontaneous fun that we saw at the park, but the unpredictability of the launches was much more problematic. In this scenario, we often found the Sky Gliderz flying into trees, and not coming down. The gliders themselves are extremely lightweight, and with such a wide wingspan, they easily get caught between branches. Fortunately, with our Sky Ripperz also on-hand, we had a means of knocking the gliders free with a few, well-placed shots (the Ripperz are super-accurate, and are both narrower and more weighted at one end than the Gliderz, making them less likely to get caught in foliage). After a while, however, this became tiresome, and even the Ripperz themselves eventually ended-up getting caught in the trees. In only a few hours of playing, we ended up with no less than three Sky Ripperz and two Sky Gliderz all caught roughly 30-40 feet up in trees, with no easy way to get them down. Fun time was over.

“After much fiddling with the wings, we were able to blast out a launch with one of our Sky Gliderz that reached an incredible 205 feet.”

Fortunately, before our product samples became tree decorations, we were able get a handful of test results that were rather impressive. After much fiddling with the wings, we were able to blast out a launch with one of our Sky Gliderz that reached an incredible 205 feet—a full 85 feet longer than advertised! And when we weren’t trying for distance and were instead looking more at acrobatics with these gliders, we were able to get a maximum hang-time of 21.23 seconds. That may not sound like a long time, but count it out in your head… for something to be floating in the air for that long without a parachute or similar apparatus is really quite astonishing! 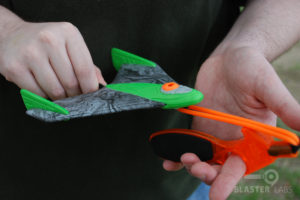 For us, the Sky Gliderz are something of a mixed bag. If you’ve never played with a Zing product, you will no-doubt be awed by what these little guys can do—they are indeed a lot of fun to play with in the right environment. And while their unpredictable flight characteristics can be somewhat amusing, initially, you will quickly find yourself running all over the place in futile attempts to catch them. And if you’re anywhere near a tree, forget it… you will almost surely lose one or both Gliderz, if you play long enough. So, to make the Sky Gliderz more compelling, we would consider adding a more heavily-weighted nose structure. We understand safety is a concern, but the Sky Ripperz have a denser foam tip, so why not the Sky Gliderz? Perhaps that would diminish the Sky Gliderz crazy aerobatics. If that’s the case, then make the wings such that they could be bent or angled more permanently, to give the user more control of flight. Also, how about mounting a camera to the nose, like they do with model rockets? Though costly, this would no-doubt add a much deeper level of immersion with the toy, and create all-new experiences for a product of this type. And lastly, the Gliderz should be made available for purchase separate from the launcher, and perhaps in some kind of bulk-pack. They are simply too easy to lose, and if you have to pay for the launcher each time, this doesn’t make for a good value proposition.

Truth be told, we had a lot of fun with the Sky Gliderz, and if the Sky Ripperz didn’t exist, we’d surely be recommending these fun little foam gliders and their fantastic launcher. And we’ll admit the Gliderz are intended to be played with differently than the Ripperz—they are meant to float and soar and loop and curve. And perhaps for families with younger children, the Gliderz would actually be the safer, and more interesting choice. But once you’ve tried the Sky Ripperz, and their crazy-accurate, long-distance shots, the Sky Gliderz feel like a let-down. And that’s the rub… the Sky Gliderz are a very good product in their own right. But the Sky Ripperz are a great product, and the one we’d want to play with most often. 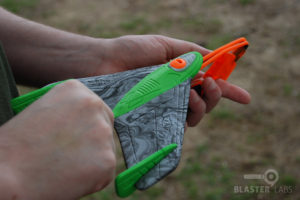 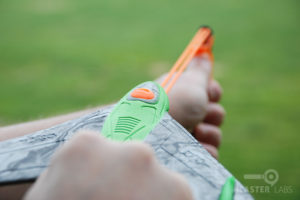 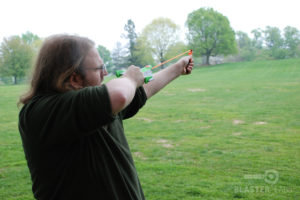 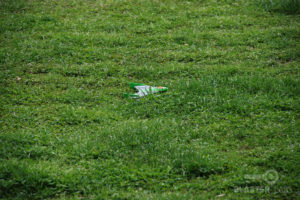 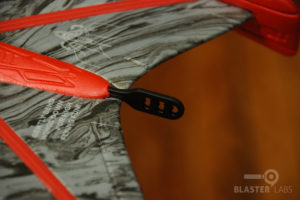 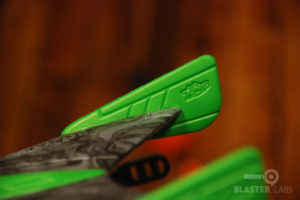 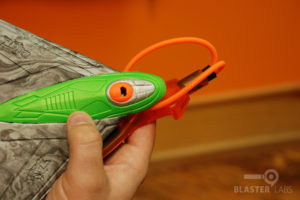 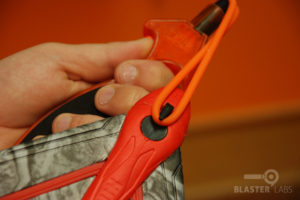 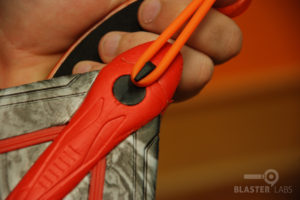 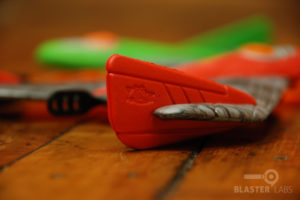 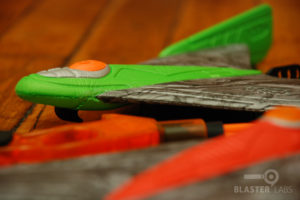