“There’s nothing new under the sun.” Or so it’s been said. But what truly qualifies as “new?” At what point is a product or idea sufficiently different from a pre-existing thought or object that it can be considered unique? These are a few of thoughts that ran through our head while considering the all-new BOOMco Rapid Madness from Mattel, which takes a lot of inspiration from the 10 year old Nerf Magstrike AS-10. That the all new BOOMco Rapid Madness borrows ideas from another generation of products isn’t necessarily a bad thing, but does it serve-up enough new ideas to be considered an original in its own right?

In some ways, the Rapid Madness is a mechanical ringer for the much older Nerf Magstrike AS-10. They are both air-powered (requiring 18 to 20+ pumps, respectively, for maximum power), both have clips that hold darts in an exposed, staggered pattern (with 20 versus 10 darts, respectively), both move the clip through the blaster via air power (one horizontally, one vertically), and both can fire up to 10 darts-per-second (which is the fastest in their respective product lines). So, let’s give credit where it’s due–we have no way of knowing how much Mattel’s designers and engineers referenced the original Nerf Magstrike during development of the Rapid Madness, but it’s not too hard to believe it was a strong source of inspiration. Now let’s see how Mattel has made the technology their own.

What’s in the Box?

As with our review of the BOOMco Farshot (Dual Defenders), we found the Rapid Madness packaging really fun-looking, with unique dimensional elements to help it stand-out on the shelf at retail. We think Mattel has created a really contemporary, hip design for the BOOMco brand, and we appreciate the consideration that has been put into creating something bold and new. Yes, the whole “extreme sports” thing is a little too on-the-nose for our tastes, but apart from the goofy skater dude videos, the branding component behind BOOMco is very strong and will have good shelf-presence. Unfortunately, the actual packaging of the Rapid Madness was ridiculously hard to open, and getting to the actual product was a chore. Obviously theft deterrence is at work here, but it took two adults something like 10 or 15 minutes to fully release the Rapid Madness from its cardboard incarceration. Once set free, we found the package to contain 30 Smart Stick darts, a 20-dart clip, and a single Smart Stick target, in addition to the Rapid Madness blaster, a clip-on shield and a set of instructions. For reasons we’ll expand upon momentarily, we found the inclusion of only a single dart clip to be woefully inadequate, particularly at the $49.99 retail price. But at least we got a few extra darts. 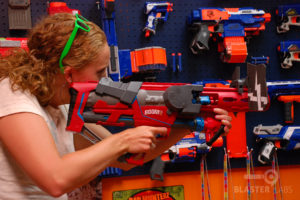 The Rapid Madness is a big, two-handed blaster. The weight is reasonably well distributed front-to-back, so it’s not a chore to hold. But the priming handle partially blocks the user from placing a hand under the barrel, so the user is forced to grab the butt of the priming handle toward the front of the blaster somewhat awkwardly, or attempt to find a grab point under or around the shield area. Fortunately, the trigger handle of the Rapid Madness is sized more appropriately for adult hands than some other BOOMco blasters, so getting a good grip with the firing hand, at least, isn’t an issue. The handle at the end of the pumping arm is comfortable to hold, and the basic iron sights are free from obstructions.

From an aesthetic standpoint, the industrial design of the Rapid Madness does the job, with a huge muzzle opening that is awesomely intimidating, a skeletal handle that is similar to other BOOMco products (but doesn’t hold spare darts), and a chunky rear fuselage that encases the internal air bladder and partially-exposed pump mechanism underneath. The only real failing here is that the gimmicky-feeling, push-to-activate shield is small and designed in such a way that it is incapable of being mounted anywhere but over the muzzle, rendering the other tactical rails largely useless. That being said, upcoming accessories like the “Rounds and Magazine,” will likely fill this void nicely. Overall, we like the futuristic, alien-esque vibe of the Rapid Madness design, even if it does come off as a little busy overall, and perhaps missing a beat or two when it comes to ergonomics. The Rapid Madness is clearly the flagship of the BOOMco line, and it flaunts its performance potential by being intimidating before any shots are ever fired.

The Rapid Madness could be the toy blaster world’s most effective cover-fire weapon. With a full 15-20 pumps, the Rapid Madness would rip through dart clips at a speed of 10 darts per second. With a fully-loaded, 20 dart clip, we clocked between 1.86 to 2.00 seconds to empty an entire clip! It’s astonishing to watch, and a very visceral experience–the sound it makes is fantastic, and the flurry of darts that are unleashed is something to behold. If you’re on the receiving end, the words “fetal position” are all that come to mind. This is the raison d’etre of the Rapid Madness, pure and simple. It excels at laying down a barrage of darts that simply can’t be countered or defended against, and you won’t find anything that fires faster in the un-modified blaster world today. If this is the only thing the Rapid Madness was capable of doing, it would be impressive on its own. But we were surprised by something else, too.

Although the packaging and marketing materials for the Rapid Madness claim distances of up to 50 feet (a good 20 feet less than other BOOMco products like the Farshot and Twisted Spinner), we nonetheless managed shots well in excess of 60 feet. Our farthest shots landed closer to 64 feet, which is actually 6 feet farther than we managed with the Farshot! Perhaps we got a ringer from Mattel, or perhaps the pre-production models simply didn’t perform as well as ours did, but whatever the case, we were impressed. A phenomenal rate-of-fire and distances closer to that of the Nerf Elite range were simply beyond what we expected.

Interestingly, the dart velocity produced by the Rapid Madness was actually slightly slower than that of the Farshot, at a more modest average of 46 feet-per-second, versus the Farshot’s 51 feet per second. While this isn’t hugely lower, it was surprising given the ability of the Rapid Madness to still somehow reach distances at least as far as its sibling. We’re going to chalk it up to margin-of-error differences, and assume that given enough testing, the two would average more similarly. And regardless of chronograph readings, darts fired from the Rapid Madness still had reasonable impact, and had no trouble adhering to the Smart Stick targets.

Finally, it should be noted that part of the energy from the compressed air is used to provide movement of the dart clip (just as in the aforementioned Magstrike). So, if you only pump the Rapid Madness a single time, you won’t get anything… the clip won’t move and a dart won’t fire. We found that it takes at least three back-and-forth pumping motions to obtain any kind of fire action. With this minimal pump, you’ll get a single shot of 2 darts (firing almost simultaneously), which will hit distances of about 40 feet. This is something to keep in mind, as the required pumping is the Achilles heel of a blaster like the Rapid Madness–even if you have spare clips on-hand, you will still need to pump roughly 18 times to get the best performance out of this blaster. As few as 3 pumps will allow you to fire, but only just. You’re going to be doing a lot of pumping and reloading if you plan to use this as a primary weapon, and you’re going to be leaving yourself open to taking fire for a longer period of time than you will actually be shooting. 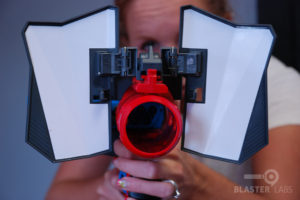 As with the Farshot, it’s readily apparent that Mattel has made a sizable investment in the BOOMco line of products. Surface detailing, painted highlights, and plastics quality is nearly as good as a typical Nerf product, if perhaps still just a tad bit behind the leader. There isn’t any creaking of plastics or hollow-sounding chambers like you get with lesser-known brands, and the entire BOOMco line feels like it has been built to withstand years of abuse. With another year or two under their belts, we could easily see Mattel’s design and engineering developing blasters on-par with those from Hasbro.

But as we outlined extensively with the Farshot blaster, the biggest impediment to the the success of the Rapid Madness–and the entire BOOMco product line–is likely to be the Smart Stick dart technology. It works, and it works well, but the darts can’t be used with any other toy blasters, and they only stick to Smart Stick-branded shields and targets (and perhaps photo paper, as the Reddit community recently discovered). And while it’s possible to use the darts without any interaction with the Smart Stick targets (and for most, this is likely to be exactly what will happen), it’s unfortunate that Mattel chose to go their own way and require users to invest in a new ecosystem rather than making their blaster line compatible with the decades of toys that already exist in the market. It’s not inconceivable that with enough time and investment Mattel could make significant inroads with this strategy, but it’s rather like the battle that Tesla and other electric car manufacturers are facing as they attempt to take-on the established infrastructure and familiarity that exists with internal combustion vehicles. It’s cool stuff that conceivably offers improved performance potential, but it’s a real gamble introducing something that can’t be used with products from other companies.

And that brings us to the value equation. Is the Rapid Madness fun? Oh, heck yes. Does it do what it says it’ll do? Yes, and then some. Is it a good value versus other products on the market? Well… for starters, it doesn’t require batteries unlike competing “flagship” blasters from other companies, so that’s a huge plus. But packing a single dart clip with a blaster than can unload 10 darts per second is an unfortunate oversight. For 50 bucks, two clips would have been far more appropriate, and some kind of bandoleer (or at least a belt clip arrangement) would have been even better. Plus, there’s the issue of the ecosystem, and whether or not your friends will also have BOOMco blasters. There’s a catch-22 aspect here that will be hard to ignore, and one that will be a real challenge to widespread acceptance, regardless of how well these blasters perform on their own (and we’ll re-emphasize that they do perform incredibly well).

The Magstrike AS-10 from Nerf clearly looks to have inspired the Rapid Madness, but it does not better it. The Rapid Madness has a larger clip, the ability to fire at greater distances, a bold and intimidating aesthetic, and the interesting (if controversial) Smart Stick technology. And frankly, the Magstrike was a lot of fun in its day, so we’re thrilled to see its basic design concepts make their way back to the blaster world, even if it’s from another company. The fact that it has been brought to life in a totally different form, and having been made better in the process, is simply icing on the cake.

The Rapid Madness doesn’t necessarily break new ground in firing technology, nor will its limited use as a cover-fire blaster work for everyone in all game scenarios. But its a wicked-fun blaster in its own right, performs at or above our expectations without any significant flaws, and demonstrates that Mattel is serious about trying out different ideas and bringing something interesting to the party. Whether or not Smart Stick technology will gain widespread acceptance remains to be seen, but as far as figuring out how to make a good blaster, at least, Mattel is clearly on the right track.