Back in 2009, Buzz Bee Toys introduced the Water Warriors Equalizer, a compact, air-pressure-based water blaster that offered very good performance for its relatively modest size. Now, five years later, we have the Water Warriors Outlaw, which is pretty much exactly the same as the Equalizer, save for a sticker that says “Outlaw” instead of “Equalizer,” and a priming handle that is orange instead of blue. And you know what? We are a-ok with that, because it doesn’t matter what they call it, or how old the design is, this blaster is one impressive performer.

The most distinguishing feature of the Outlaw is a compact, purpose-built aesthetic that features a body built entirely around the massive 48 oz. water tank. It’s a design that is attractive while being almost entirely utilitarian. There’s a single, non-adjustable nozzle in the front, a reservoir cap up-top, a priming handle down below, a trigger in the back, and some cladding on the sides to hold the tank in place. And that’s it. There are no superfluous bells and whistles… no multiple nozzles, no gimmicky angle meters, no clips, no batteries, so sights, no stocks. In other words, it’s entirely no-nonsense. And when you design a blaster that performs as well as the Outlaw, you don’t need them.

The Water Warriors Outlaw boldly proclaims “Air Pressure” on the side of its packaging, which is Buzz Bee’s claim to fame in water blasting technology. It’s a design that requires the user to pump the handle to build-up pressure in the reservoir before each shot, without which firing is not possible. And while this pumping can be a form of moderate exercise in and of itself (our best ranges typically required in excess of 10 pumps), the action is smooth and reasonably easy. The downsides of this form of pressurization technology include the possibility that the user will get a shot of sputtering mist rather than a water stream if the tank is running empty, and the actual distance of the shots will decrease as the pressure equalizes. Aside from those caveats and the aforementioned arm workout, the air pressure system used in the Outlaw has some serious benefits. 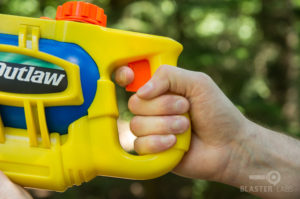 Our very first shots with the Outlaw were eye-opening. Shooting over a hilly bank at a cabin deep in the Pennsylvania woodlands outside of Harrisburg, we saw streams that were impressively long-reaching, very thick in appearance, and incredibly long-lasting. An impromptu timing with a stopwatch recorded shots that would easily last more than 15 seconds in duration, with no perceptible loss in stream thickness or range until the last few seconds—and this was all with a single pull of the trigger (no extra pumping required)! Those shots produced a stream of water of approximately 1/8” in thickness, with very good lamination. These were our first impressions, but they proved to be fully representative of the Outlaw’s capabilities. In our measured testing, we hit distances of 26.5 feet when fired flat, with an average shot distance of approximately 32 feet at a moderate angle, and a maximum distance recorded at 42 feet, 4 inches. In our experience, it’s rare that products live up to manufacturers’ claims—even in ideal conditions and after repeated attempts. But in this case, Buzz Bee’s claimed range of “up to 42 feet” is exactly on the money.

In use, the Outlaw showed its function-over-form side when it came to ergonomics. The firing handle’s trigger is mounted very close to the body, such that those with larger hands might actually have a hard timing fitting their trigger finger into the small opening. In addition, the centrally-mounted water reservoir caused our testers to often wish for a top-mounted handle of some sort, since lugging a 4 ½ pound (when filled) blaster around by the one end can get tiresome. Speaking of tiresome, the sheer weight of the filled blaster requires the user to hold it by the pump handle when firing, since there’s no shoulder stock or other method to take weight off of one’s firing hand, wrist and forearm. This isn’t necessarily a design flaw, but the relative compactness (16.5” long) of the Outlaw implies that it will be easier to hold than it really is.

“…the Outlaw was appropriately air-tight from its water reservoir, a fact punctuated by the audible release of air pressure when the sealed cap was unscrewed. It’s a subtle, but very cool reminder that this is true air-pressure-based blasting at work.”

The flip side of a heavy blaster such as the Outlaw is that it’s heavy because it’s holding a lot of water. And when you’re shooting nearly 40 feet in 15-20 second long bursts, you’ll need all the water you can get! In fact, it wouldn’t be hard to drain the entire water reservoir in roughly a minute, if the Outlaw was fired non-stop—which, by the way, is totally possible. We found that by pumping the Outlaw, then pulling the trigger while still pumping, it was relatively easy to create a continuous stream of far-reaching water with no breaks in the action. If you have your opponent pinned-down, and you have a full tank of water and decent aim, there’s no way they won’t come out of it without being soaked from head-to-toe. 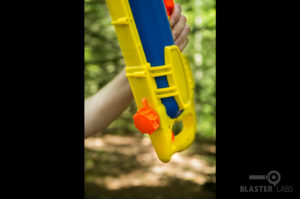 And fortunately for the Outlaw user, there won’t be much self-inflicted soaking due to leakage. Unlike some other blasters we’ve reviewed recently that tend to make a mess of things, the Outlaw was appropriately air-tight from its water reservoir, a fact punctuated by the audible release of air pressure when the sealed cap was unscrewed. It’s a subtle, but very cool reminder that this is true air-pressure-based blasting at work. Unfortunately, we did experience a small bit of water leakage from the front priming handle. It wasn’t significant, but it does underline our ongoing criticism of Buzz Bee products not being built to quite the standard we would like (the low price does temper our feelings on this somewhat, but we’d still rather not have these kinds of issues).

If there’s one thing that speaks to the success or failure of a product design, it’s how often a person actually wants to use the product in question. And in the case of the Outlaw, we all wanted to use it. It’s highly accurate, very powerful, and provides enormous soaking potential. More than anything else, it’s that kind of over-the-top drenching power that makes the Outlaw earns its new name. Indeed, the Water Warriors Outlaw is more than just an Equalizer… it’s a water blaster to be respected on its own terms. It’s a water blaster that earns its name, full stop. It gets our wholehearted recommendation—no gimmicks required.