Hasbro really wants me to write about the Amazon Dash button that’s now available for Nerf. They’ve sent me press releases, images, a blaster missing most of its darts, a hand-written note encouraging my use, an actual Dash button, and even an Amazon gift card to help me try it out. In other words, they’re doing all they can to get me excited about it, but much like the rest of the Nerf fan community with whom I interact, my initial to reaction to the Amazon Dash button for Nerf was a resounding “meh.” Nonetheless, I decided to give it a try.

The concept of the Amazon Dash button feels like something out of a product planner’s dream… eliminate all the barriers to purchase by creating a product-specific “easy button.” At the same time, by making that button exclusive to your particular brand, the dangers of cross-shopping can be

virtually eliminated. Oh, and since you don’t have to leave the comfort of your own home to make said purchase, there’s no reason not to buy that item immediately–and repeatedly. It’s like eBay’s “Buy it Now” button for the instant-gratification generation. It’s modern consumption at its best (and possibly, worst).

So, what is the Amazon Dash button, exactly? The Dash is a physical device that is sold by Amazon for $4.99 (with a $4.99 credit toward your first purchase) that allows consumers to instantly order products through their connected Amazon Prime accounts via WiFi. When a Dash button is pressed, it sends a signal via WiFi to the users connected device (a smartphone running the Amazon app), which places an order without any further interaction from the user. The device is small, and has only a single button. It can be placed virtually anywhere around the house, and was originally intended for high-consumption items like paper towels, detergent, etc. A single press places an order, though the user has half an hour to cancel the order via a notification sent to their mobile device. Repeat orders won’t be sent until the initial order has shipped, preventing unintended multiple orders.

So that’s how Amazon Dash buttons work, in general, but what about for Nerf, specifically? Well, the idea is that Nerf darts are consumables that need to be replaced often. And, truth be told, Nerf darts are a big money-maker for companies like Hasbro. Darts are actually assembled by hand (not inexpensively, I’m told), but the margins are still extremely good. And kids (adults too) lose darts all the time. So Hasbro would love for us to purchase more darts, more often. The Amazon Dash button for Nerf, therefore, makes a lot of sense from a corporate perspective. And here’s how they’re positioning it for consumers:

PAWTUCKET, R.I.–(BUSINESS WIRE)–Families can now stay stocked up on their favorite playtime essentials with the introduction of Amazon Dash Buttons for the Hasbro, Inc. (NASDAQ: HAS) PLAY-DOH and NERF brands. Launching today, PLAY-DOH and NERF are the first toy brands available in Amazon’s popular program which allows Amazon Prime customers to reorder preferred products with the press of a button.

“NERF and PLAY-DOH are two of our most popular brands with families consuming darts and PLAY-DOH compound as part of their daily playtime,” said Jeff Jackson, VP of Sales at Hasbro. “We don’t want the fun to stop when supplies run low and teaming up with Amazon allows our consumers to keep playtime going while incorporating our brands more seamlessly into their everyday activities.”

The Amazon Dash Button is a small, Wi-Fi connected electronic device that makes ordering products quick and efficient. Starting today, the Amazon Dash Buttons for the PLAY-DOH and NERF brands are available for Amazon Prime customers to order onwww.amazon.com/dashbutton.

Once purchased, Amazon Prime members sync the buttons to their Amazon Prime accounts for fast, convenient ordering with Prime FREE Shipping. By pressing the Amazon Dash Button for the PLAY-DOH brand, customers can order a PLAY-DOH Mega Pack, PLAY-DOH 24-Pack of Colors, or a PLAY-DOH Fun Tub. With the Amazon Dash Button for the NERF brand, customers can order dart refills for the NERF N-STRIKE ELITE, NERF REBELLE, and NERF RIVAL blasters and bows.

So, Amazon Dash buttons are for our benefit, get it? They’re just trying to make our lives easier by eliminating the hassle (?) of purchasing darts via traditional means. Fair enough. But is that actually true? Does the Amazon Dash button for Nerf make it easier, more enjoyable, or somehow more cost-effective than buying darts in other ways? Well, I had to test it to find out. 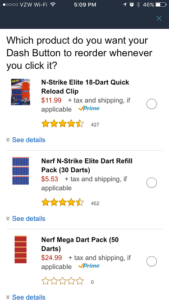 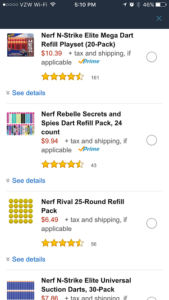 The first thing I noted in attempting to set-up my Nerf Dash button is that it requires a smartphone running the Amazon app. So if you’re looking to set-up a Dash button at home with just a computer, you’re SOL. But the Dash is really more for early-adopters at this stage, so let’s assume having a reasonably modern smartphone with the Amazon app isn’t an issue. The next small hurdle you’ll encounter is the need to re-enter your Amazon app password to initiate the set-up, even if you’re already logged-in to the app. The Touch ID feature rarely works on my phone, so I had to open my password management app to find out what password I have set-up for Amazon, and then copy it over accordingly.

Assuming you’ve met the smartphone criteria for Dash set-up, you’re about halfway there. During Dash set-up, even though you’re using your phone, you also have to connect the Dash via WiFi–and doing so requires the password of whatever WiFi network it’s using. So if you’re anywhere other than on your own network when you first try to set-up the Dash, you may hit a dead-end (that’s what happened to me, initially). Since I wasn’t in range of my home’s WiFi when I first tried to set-up the Dash, and didn’t know the password of the network where I was located, I wasn’t unable to get things rolling right away. So much for convenience.

Once I was back at home in range of my personal WiFi network and with smartphone running the Amazon app in-hand with my other hand holding the Dash itself (got all that?), setting-up the service was pretty seamless. Instructions are included with the Dash… and it only took a minute or two for things to be up-and-running. But that’s not where the questions and a bit of head-scratching ended:

Once set-up, the Amazon Dash button for Nerf was actually quite easy to use. When the Dash button is pressed, there are some blinky lights to tell you it’s doing stuff, and that’s it. Then, a couple days later, your product arrives per the Amazon Prime standard. In my case, it was a pack of “Nerf N-Strike Elite Universal Suction Darts, 30-Pack” that was selling for $7.86 with free shipping from Prime–I could have gotten regular Elites, RIVAL HIRs, Rebelle darts, MEGA darts and a few other, related items, but I have lots of all of those, so I went with the suction-tipped ones since I don’t have many of those on-hand. And sure enough, they arrived at my house just like every other Prime product, and all was well.

But simply pressing a Dash button to place an order feels TOO easy. It’s almost Pavlovian, really… like the American consumer has been reduced to a hamster pressing a button for a treat in the eyes of corporations. Economists have long said that people who use credit cards spend more than those who use cash, since spending cash requires them to physically SEE the money leaving their hands. And this feels even worse. Pressing a Dash button is so far removed from the feeling of spending money, it really doesn’t seem like you’re spending money at all. That’s probably exactly what a company like Hasbro has in mind, but for consumers who aren’t particularly well-disciplined (which is, oh, most of America, particularly kids), that could be problematic. 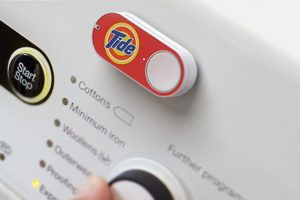 Yet, the Dash button for Nerf has a bigger problem: it’s rather pointless. It’s true that Nerf enthusiasts do lose darts. But many fans don’t use Nerf darts at all–Elites are known for poor accuracy and other issues, so many fans use third-party darts with superior qualities of flight, durability, economy, or all of the above. In other words, those who go through darts the fastest are also the ones who are the least likely to want to purchase darts made by Hasbro in the first place. So who is the button for? Perhaps moms and dads with kids who frequently engage in Nerf battles, and who don’t particularly care how many darts are consumed will find the Dash button for Nerf to be of value. But I have my doubts. At least trying it out won’t cost you anything beyond the price of the item (Amazon pays for the Dash with your first purchase).

So if you like Nerf darts, you go through them frequently, you don’t mind waiting a minimum of two days to receive them, you’re ok with the limited purchase choices, you want to order the same thing every time (or don’t mind taking the time to re-associate your Dash with a new product), you’ve got an Amazon Prime account, you have a smartphone running the Amazon app, you have a WiFi network, you only place orders within that network, and you’re not a compulsive buyer with a spending problem, the Dash button just might make sense. For everyone else–which is likely almost everyone who actually uses Nerf blasters to play–the Amazon Dash for Nerf is an overly-limiting solution to a problem that no one has asked to be solved.

Sure, Nerf darts are a “consumable,” but until Amazon can drop them to you in the heat of battle via drone flying overhead, the Dash button doesn’t do anything for the average Nerf player that would be of particular value. If anything, the Dash button for Nerf is overly limiting with no real up-side for the user other than… saving maybe 2 or 3 taps in the regular app? The intent seems good, but a Dash button for detergent when your laundry can wait a day or two and you always get the same kind makes a lot more sense than a Dash button for Nerf when you need darts right now, and potentially for a variety of different blaster types. There are a lot of products for which the Amazon Dash button makes reasonable sense. But Nerf is not one of them. 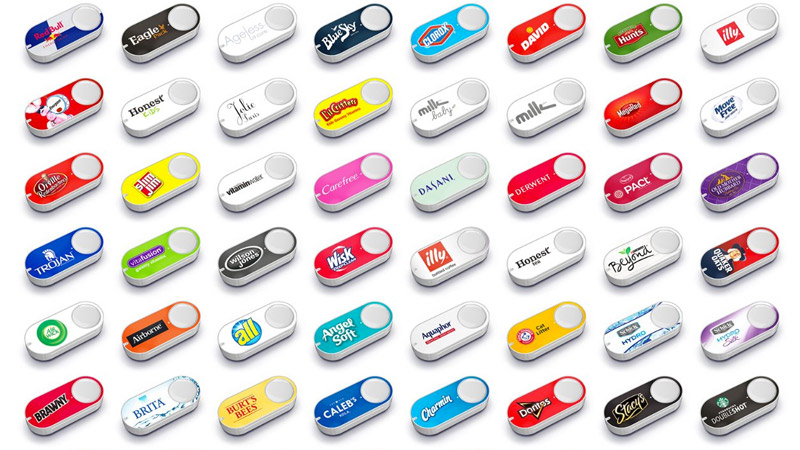