Thanks to friends on Facebook and Reddit, I found out about the newest blaster lineup from Lanard Toys. As of this posting, the Lanard Huntsman Alpha series consists of a new bolt-action blaster, a new air pressure pistol, and a recolored Sonic Bazooka (which is nice to see on shelves again). Today we will examine the Lanard Huntsman Ambush. 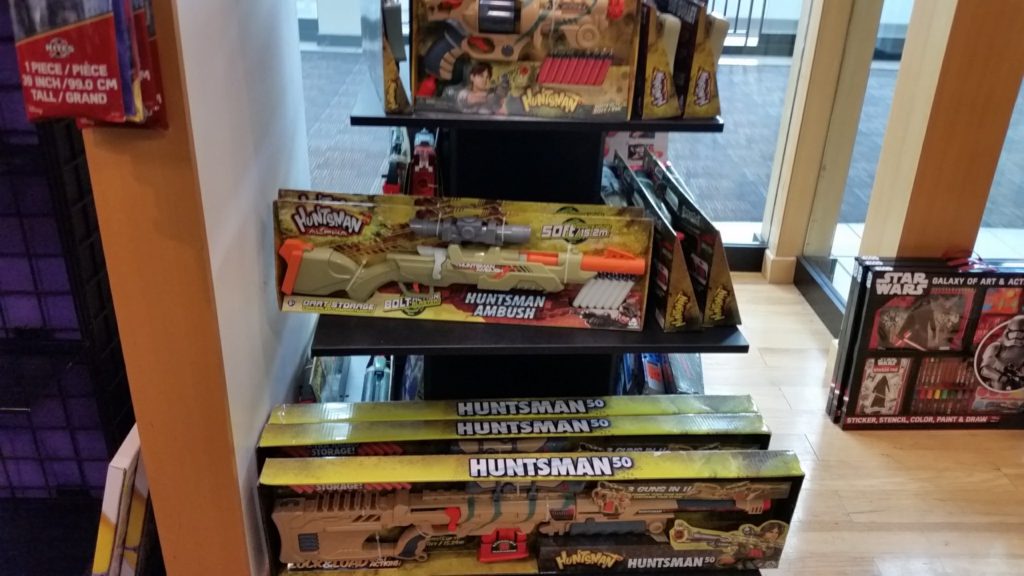 The Ambush is a single shot, bolt-action blaster with a scope attachment and dart storage in the stock. In that sense, the Ambush is Lanard’s version of the Buzz Bee Ultra-Tek Predator. The internals are a surprise, and the stock performance is better than advertised. But the asking price of $22 is an issue, especially when a blaster like the Predator can be found for $10–and with better stock performance, to boot. 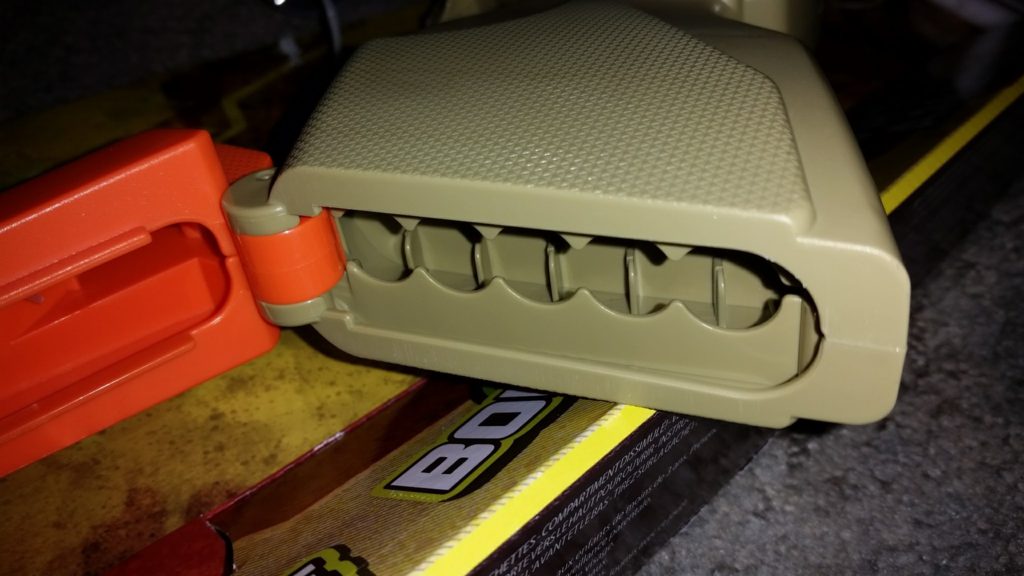 The stock has storage space for five darts, hidden behind a flip-up door. If anything, the slots are a little too large for the included darts–don’t open it up while the butt is facing the ground! The scope, meanwhile, simply snaps on top of the blaster. There are no accessory rails to speak of, so if you happen to like the scope, you’ll need some other way to mount it to your other blasters. 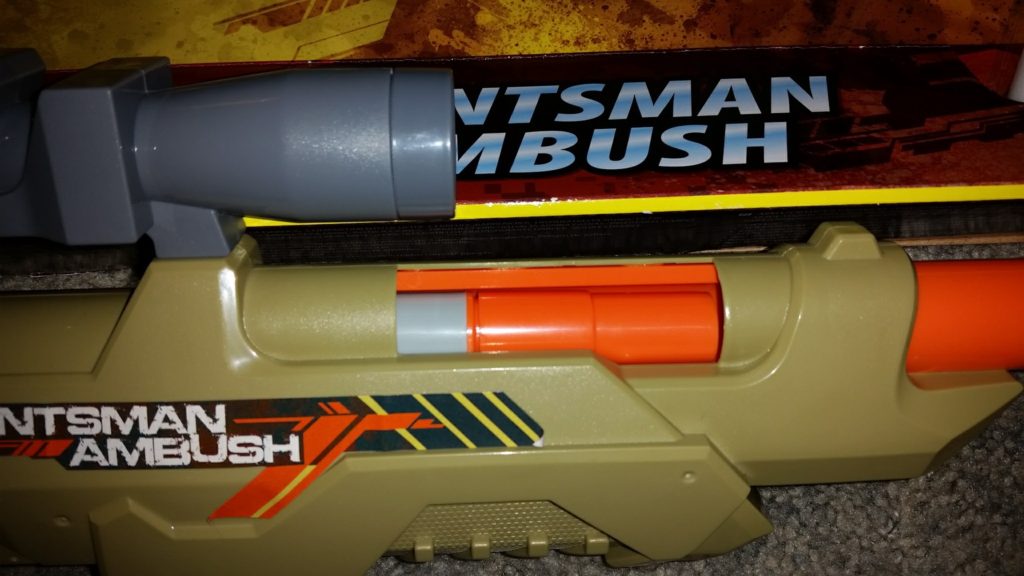 The Lanard Huntsman Ambush has roughly 2 5/8″ of draw, which means the breech is shorter than the darts you’ll be loading. That’s not really an issue since we use foam darts, mainly just an annoyance. As you can see, the barrel is the orange piece of plastic plastic welded to the front of the grey bolt assembly. The  air restrictor sits between the two pieces, floating freely without a spring behind it, which makes for an annoying rattle when handling the blaster.

The barrel is poorly designed, with only the back inch or so actually holding the dart. If there wasn’t much power to the blaster, this wouldn’t be an issue. But when we open the blaster up, we can fortunately see a rather impressive power plant! 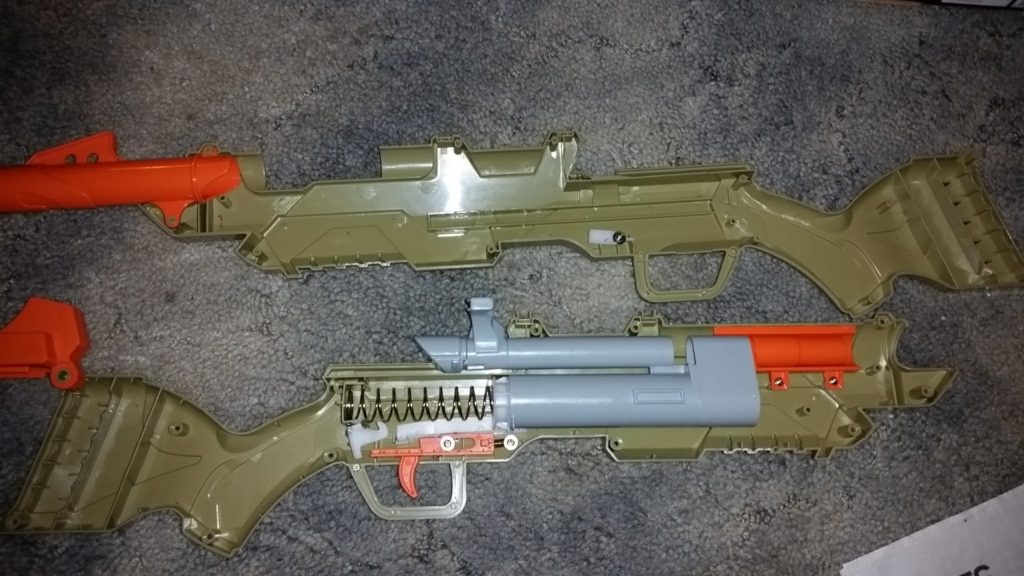 The plunger tube is roughly an inch in diameter where the plunger head rides, and the entire plunger sits in front of a beefy spring. This means we have a blaster body that wasn’t built to harness the power inside it. It’s easy enough to remedy with a new barrel, but as a stock blaster, it’s disappointing. You simply have a lot of air going to waste. 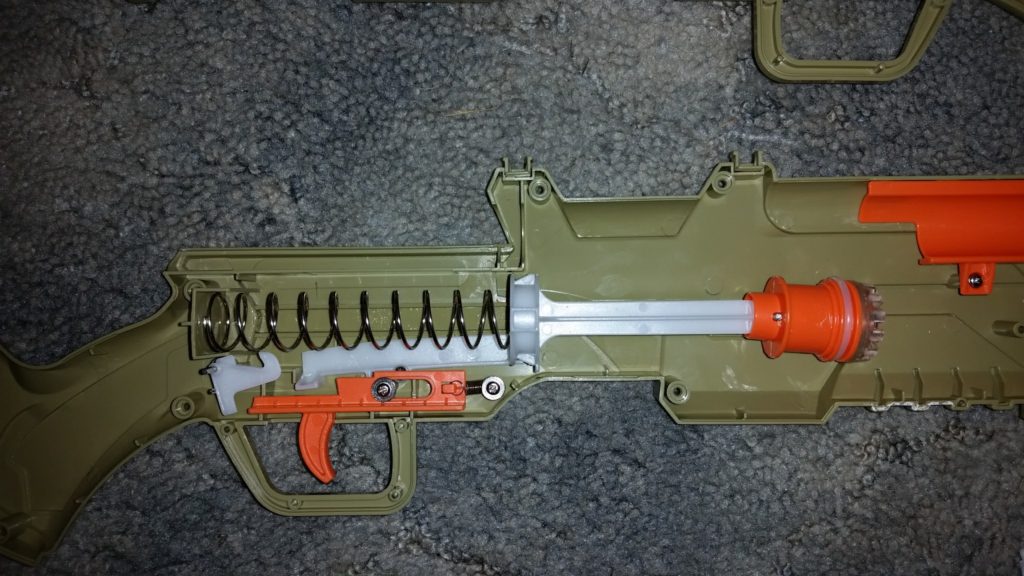 The plunger head and rod are fastened with a metal rod. Both the plunger and the tube have grooves that only line up in a certain way, and there are white, spring-loaded levers that prevent firing until the plunger tube is all the way forward, and also keep the tube there until after you fire. If you reassemble the blaster without everything lined-up properly, you won’t be able to prime the blaster, let alone fire it.

The packaging claims ranges of up to 50′. Even with the barrel issues, I was hitting angled ranges averaging 55′ with the included darts. Keep in mind that Lanard’s micro darts are rather poor quality in comparison to other brands. Elite streamlines hit a respectable 65′ average. However, more than a few darts came out of the blaster in a death spiral, traveling maybe 15′ forward. There’s a reason we need longer barrels–unused air behind the dart can knock it off course and ruin your shots.

The Ambush offers decent ranges and plenty of modding potential. However, the price is currently the sticking point. As of now, I’ve only seen these blasters in Go! Toys and Games stores in malls and the like, and they are somewhat infamous for their price inflation. So this $22 blaster can be left alone on the shelf while you grab an Ultra-Tek Predator at Walmart for $10 and get better performance out of the box. Hopefully these will appear at other stores like Dollar General for much lower prices. Until then, unless you really want it, skip the Lanard Huntsman Ambush for now.