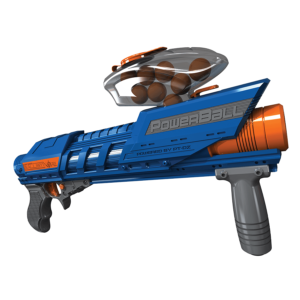 The Powerball is a simple platform. For $18, you get a pump-action Rival-type blaster with an eight-ball hopper. A safety sits in front of the trigger. In cases of jams, an orange tab in the rear of the shell allows the user to retract the breech. In addition to using the included ammo and hopper, the Powerball can use Rival magazines and ammo.

The shell is sturdy and serious in styling. The spring inside is very strong, and rounds average in the high 90s in feet per second. Seeing that most Rival blasters aim for 100fps, the Powerball stands out as an inexpensive but competent competitor. Except for one thing…

It turns out the loading mechanism within the breech is too short. The force of the magazine spring, even with only a few balls loaded, is enough to push a ball past the loading tab into the barrel area. Since the next ball will sit on the tab as expected, you load two balls instead of one. Since the breech wasn’t made for double loading in mind, pushing the handle forward to seal off the breech will become difficult. Not impossible, but very difficult. Obviously, ranges will be greatly reduced. Although I’m still editing video from the Youngstown State University HvZ Invitational, I can tell you that there’s plenty of footage showing double feeding. The solution is easy, however, so this review will take a short detour into modding to show what the Powerball Blaster SHOULD be capable of doing. 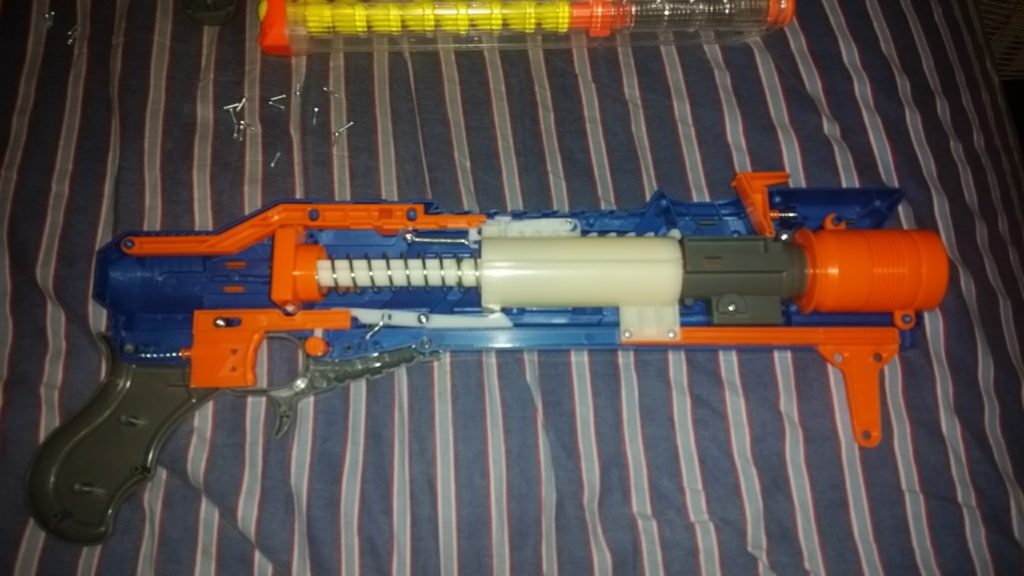 After the removal of all the screws in the shell, you can see the layout of the internals. The priming bar pushes the entire plunger tube assembly backwards to prime the system, with the breech opening at the end of the priming motion. The plunger itself is very sturdy and roughly 1 5/16″ in diameter at the head. Interestingly, there is a large amount of space behind the plunger head that serves purely as a spacer for the spring. In addition, the catch divot on the plunger rod is omni-directional. 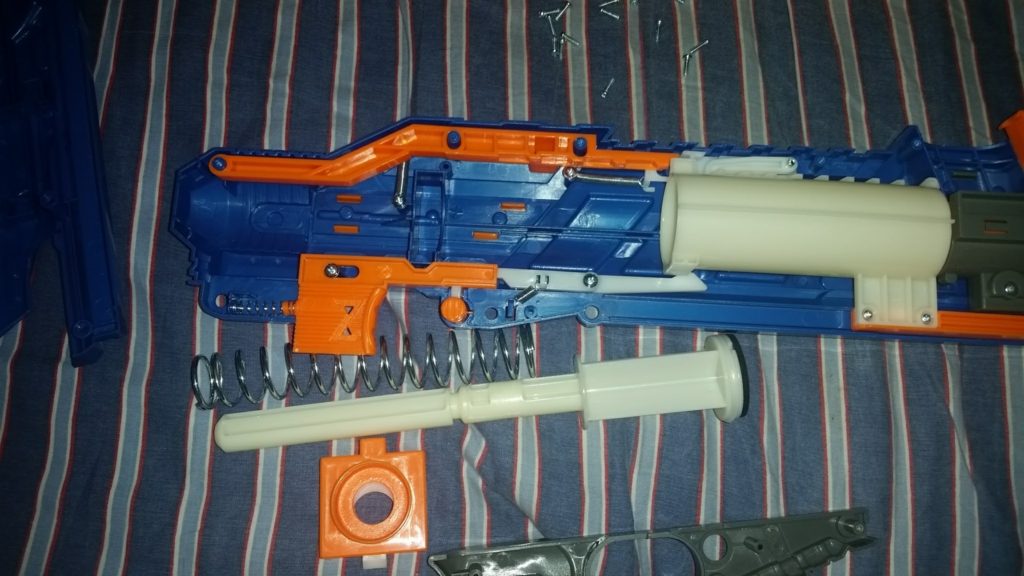 Above the catch assembly, you can see the safety lever that prevents re-priming until the blaster has been fired. There is also a ratcheting mechanism that sits above the plunger tube. As previously stated, this can be overridden by moving an orange tab from the outside. In reality, the tab is a part of the orange safety lever, and just moves it out of the way. Note also the white lever below the plunger tube. This prevents the trigger from being pulled until you finish priming the blaster. 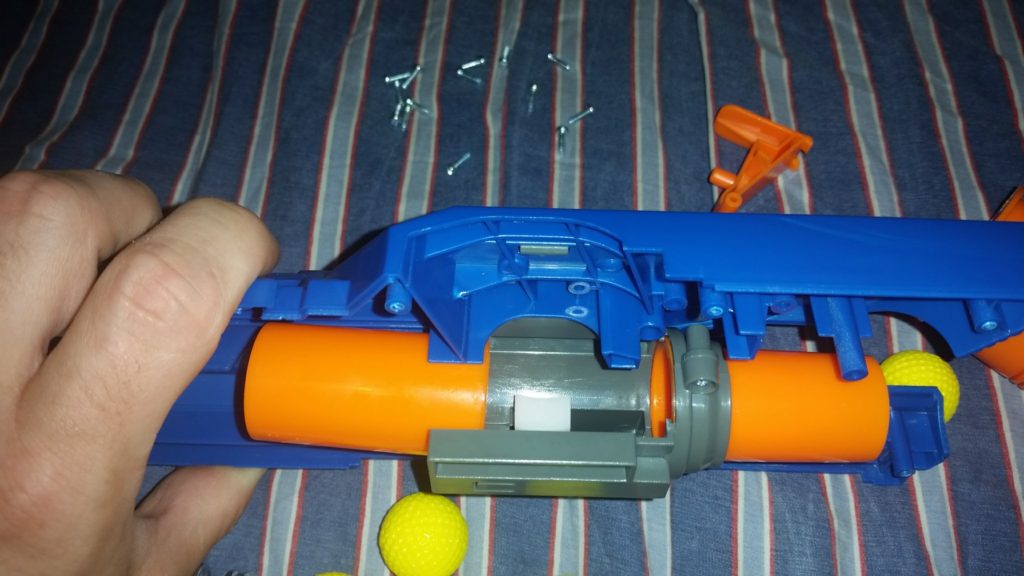 Finally, we get to the breech, where our issues lie. The two grey halves of the assembly are held together by two screws, and the loading tab sits in the bottom. It’s a small white piece with a torsion spring contained within to pop it out. The orange, rear half of the breech pushes it down on the forward motion, dropping a ball just behind the barrel for loading. For the included hopper, it works perfectly. For Rival mags, it’s too short by a few millimeters.

The Part You Need 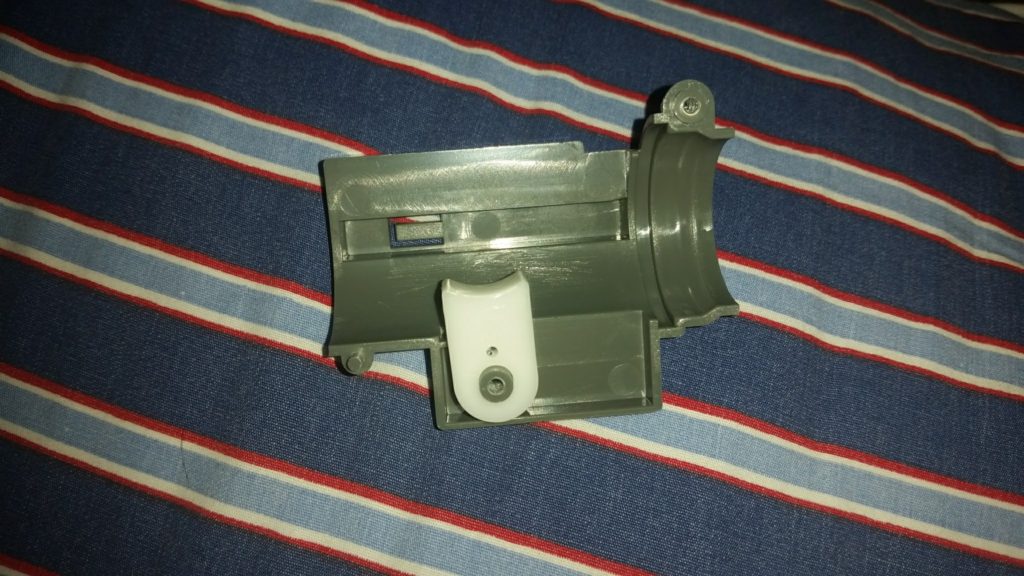 If you’ve made it this far and have access to a 3D printer, download this file. I designed a loading tab a few millimeters longer that will still fit correctly within the space, but makes operation much smoother. After a few hundred rounds, I have yet to see any hiccups in loading from magazines, and the hopper still works as expected. The center hole may need expanded slightly depending on your printer settings and how well the part turns out.  A “perfect fit” doesn’t really allow for free movement, after all.

And because it’s important to show that it works…here’s a video.

The Dart Zone BallistixOps Powerball is a great blaster. It performs as well as any spring-based Rival blaster, and boasts cross-compatibility with the leading brand. An unfortunate design oversight makes for some initial difficulties, but once it is fixed, performance is absolutely flawless. Even without the fix, though, this blaster can give any Rival user a run for their money, and at a fraction of the cost.