The Nerf fall lineup is just starting to appear on shelves, as well as online at retailers like Walmart and Amazon. Among those entries is the newest member of the Modulus family, the Regulator. Its main selling point is select fire; a switch changes between single shots, three round burst, and fully automatic firing modes. In addition, many new attachments are included. The end result is a product with lots of promise but occasionally mixed results. 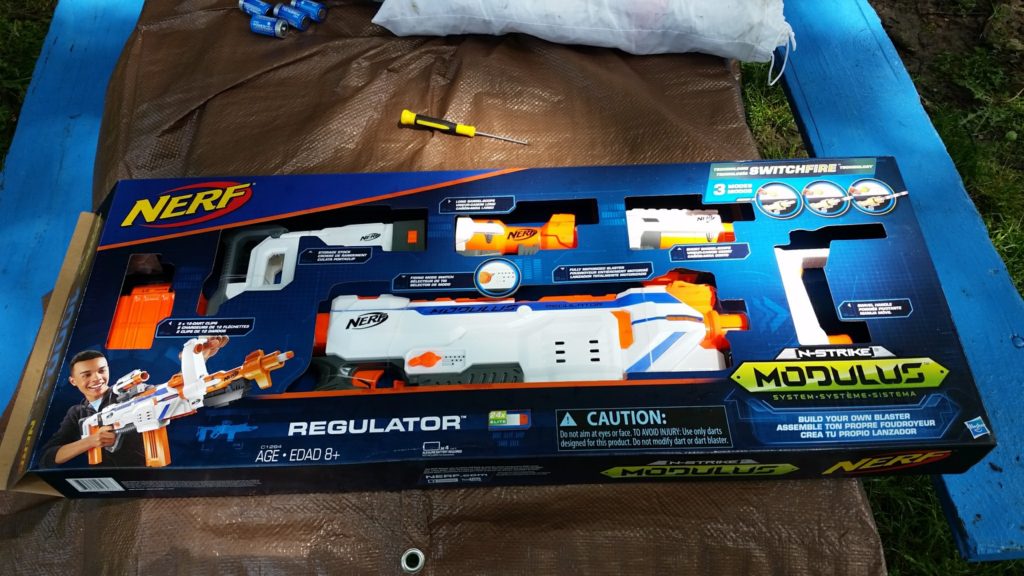 I first got a hold of the Regulator on a trip to Canada, and brought it with me to a war with the Naptown Nerf group. In addition to the main blaster, the Regulator came with clips, a stock with storage, two barrel attachments, and a modular carry handle/extension. The barrel attachments can also serve as faux scopes, if the user feels so inclined. 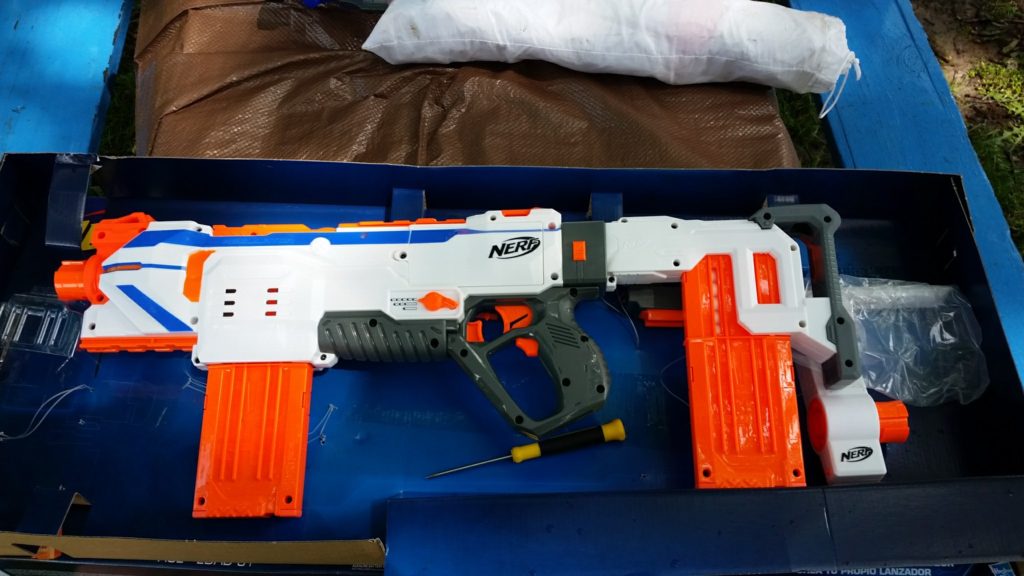 As usual, the plastic quality is excellent. In addition, the stock is a vast improvement over the original Modulus stock. It is relatively short (keep in mind I am adult reviewing a toy), but it’s also very sturdy. The magazine well sits farther forward compared to other blasters (Stryfe, Rapidstrike, etc), requiring a minute to adjust in terms of hand placement. The magazine release sits directly in front of the firing trigger. For large fingers, that will be extremely awkward. The fire select switch sits farther in front of that, and can be toggled by your trigger finger or your off hand.

Results out of the box were less than stellar at first. Strangely, I was having trouble feeding the included darts from the included magazines! Using other magazines solved that problem. I may have simply had a bit of bad luck; I hope that isn’t a common occurrence. It should be noted that if the darts don’t advance in the magazine within a few seconds, the unbroken IR beam within the shell will be interpreted as meaning “empty magazine”, and the light on the back with flash red. In addition, the belt will have been running for several seconds. So if you’re in a quiet or low light environment, all attempts at stealth are futile.

The trigger responds to the engaged setting. On single dart and burst fire, simply tapping the main trigger is enough. Even if you release the trigger, the blaster will continue cycling until the right number of darts have been fired. There is a noticeable lag in firing, due to the on-board chip having to process the commands before engaging the belt.

When working correctly, the Regulator does its job adequately. Singled shots can hit up to 100′ at an angle, as can the first parts of three round bursts. Firing several rounds consecutively will, however, bog down the flywheel motors. Like the Hyperfire before it, the Regulator has a high rate-of-fire feeding mechanism (belt) but a low rate-of-fire firing mechanism. Previous full-auto blasters like the Rapidstrike may have fired more slowly, but they could handle it. With these belt-fed dart blasters, you can really hear the stock motors struggling.

Thus we hit the real problem Hasbro faces with belt-fed dart blasters: higher torque motors are a necessity, but common alkaline batteries simply can’t supply enough current. It’s possible that Hasbro could offer a smaller version of the Rival NiMH rechargeable battery pack, but that would require adding bulk to the shell, with future blasters featuring a removable alkaline battery tray. I really don’t see that happening any time soon.

Exposing the circuitry. It doesn’t make modding impossible, just more difficult, for those wanting to preserve its functions.

The Regulator is a fine blaster platform, and its features work as advertised. So on the basis of meeting claims, I can’t help but give it a recommendation. The attachments are solidly built and (in the case of the stock) better than previous versions. The various fire settings all work. The warning light for empty magazines and the slow trigger response are annoying, but they’re not dealbreakers.

Casual Nerf fans and little kids will love this. But the modder in me sees the ways in which the blaster could have been fully improved, and realizes that no matter how annoying those things might be, I have to accept some blasters as they are.

I won’t be using it in a war or HvZ event anytime soon, not without extensive work. But your mileage may vary.