The weekend before Toy Fair, I got to drive back to Athens, Ohio for a fun winter HvZ game. Being February, it was a small group, but it was still a blast being able to have an actual HvZ game after only minigames and regular Nerf wars. It was about as silly as I expected it to be!

Once in Play, Always in Play 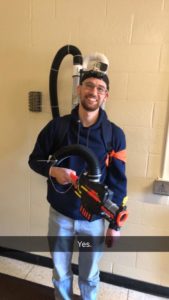 A picture a friend took of me prior to the game.

This HvZ game had a few changes from what I’m used to. Instead of mission briefings, topping off on ammo, or changing loadouts, you were stuck with what you had (and could scavenge off the ground) once the game started. On the one hand, it meant a definite end, even with the pauses for dart cleanup. On the other hand, it meant that if you were testing something silly, you were stuck using it until you died.

In my case, that was a ballistic ball “Hirricane” that I mounted to a backpack. A 12V Coleman blower fan, powered by a 3S lipo, drives the balls. The backpack has several lengths of 2″ rigid vacuum tubing, with elbows, plus one tee that ends in a loading cap, A flexible shop vac tube then connects the backpack to the blaster. In this case, a Tyco Thunderstrike 20 I thrifted. It only does semiauto, but that’s fine with me. Full auto ballistic balls would just be too silly 😛

The backpack worked beautifully, and (with help) could be reloaded in the field. The blaster needs some love and will soon be modded for better performance. In the end, it didn’t matter too much, as I had an unexciting death by noodle from not paying attention!

WHY WON’T YOU DIE?

As a zombie, though, it was fun! I had a noodle almost the entire time, and was (in my opinion) more effective as a distraction than anything else. I still got a few kills, however. It was also fun dodging darts and blocking with the noodle when possible.

If for some reason you’re in the Midwest on March 22-23 (and not doing the Campus CTF/Supremacy weekend at Purdue), Athens has a full spring Invitational coming up! Friday night is, of course, optional and guaranteed to kill almost everyone prior to the start of the main game on Saturday. But it’s there for extra fun and possibly earning things for Saturday play!