We have quite a few blaster officially announced by Hasbro prior to Toy Fair (regardless of blaster “leaks”, Hasbro is a corporation that operates on it’s own schedule). I’ll have the official release text posted after work (I still haven’t quite mastered the subtleties of the touch screen). In the meantime, here are some pictures and info! 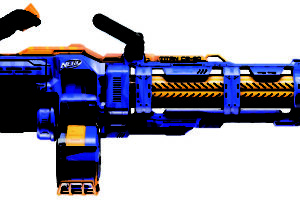 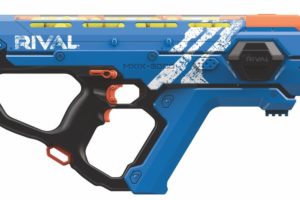 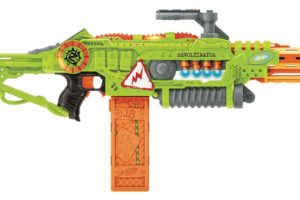 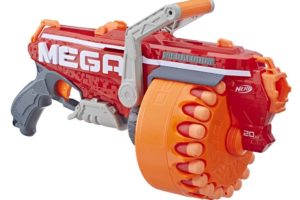 This one came out of nowhere. An actual Nerf “minigun”, although after the Prometheus, it was only a matter of time before Hasbro used the same format for darts. It has a spinning barrel, and runs full-auto on 4 D batteries. Even more important, however, is the appearance of the long-gestating 50-dart drum! That thing has been known to exist since the Stampede (featured in original artwork and patents), but now it appears to finally be working as intended. Admittedly, I really want to throw that drum on an Infinus.

Well, it’s slightly different from what I originally thought. It’s essentially a 50-round Nemesis, but with a better profile and an included rechargeable battery. It also features the same 8 rounds per second rate of fire as the Prometheus, meaning you’ll use those rounds quickly. We’ll see if the form factor outweighs the loss of capacity in the hopper.

This blaster, as speculated, is a Stryfe reshell. It includes lights and sounds to go with the “overcharged” blaster theme, and comes with an 18-dart magazine.

This one has been known for a while. Twenty darts in the drum, the crank handle primes the blaster, and you can also slam fire.