I’m slightly behind on game report posts and editing my own video, so thanks to a friend of mine for having footage edited of much of the event already. You can be nice and subscribe 🙂

As usual, the HvZ game at Youngstown State University on April 12-13th was a blast! It revolved around a secret cult trying to end the world. Many hijinks ensued.

I was not actually present for Mission Zero! I didn’t make it up for Friday night play (I actually had things to do down in Cincinnati). But it set the game in motion. As usual, the plot lived, the humans didn’t (everything resets for the next day).

Players became aware of a cult following “Iman” and trying to bring about the end of the world. The members of Red Team present served as the starter zombies for the evening, and helped to wipe out the filthy humans. But in the process, enough clues were gathered for people to start piecing the story together the next day.

Our specials for the Invitational ended up being a Boomer (when it goes off, serves as a temporary respawn point) and the Demon. The latter was invulnerable and would regularly run into groups of humans, trying to tag one. If successful, it would direct the human to shoot a teammate (and turn them into a zombie). Alternatively, the target could shoot back as a mercy killing.

Of course, if all potential human targets ran away, or the human made a good faith effort to kill the target (even if it meant unloading a clip at the human running far away), they would be spared. It makes for tense moments later.

Finally, there were select touch respawn points that zombies could use, if humans didn’t disable them first. This continued throughout the Invitational.

Pictures are courtesy of my friend Elijah, who took pics throughout the entire day. 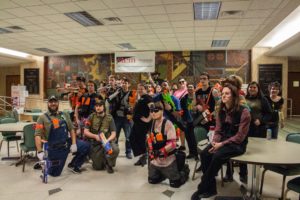 The humans going into Final Stand. 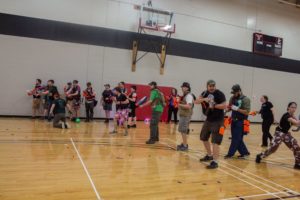 Mission Two playtime in a gym. 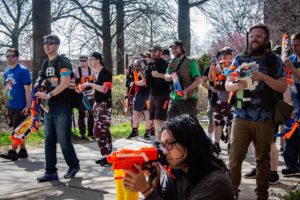 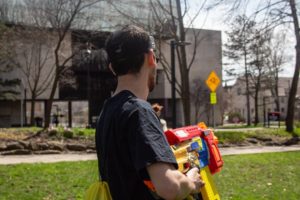 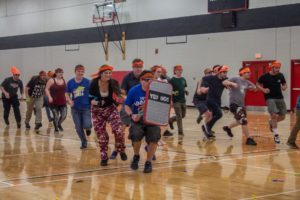 The start of Saturday play ended up being a bit different. We only had one starter zombie, and so the specials were a bit aggressive. Which ended up working out, to often hilarious results as humans gleefully killed each other when tagged by the demon. I even hugged it at one point, unloaded at a target, and got to live because they dodged all the megas flying at them.

Humans split into “Detectives” and “SWAT” with different abilities. Detectives mainly handled evidence, but were also immune to pool noodles and horde eggs. SWAT could make a final 15 second stand if tagged, and could also handle the BFG (a foam rock) when it was retrieved. Thus, the day went on, as we tried to gather evidence on various cult activities, including making traffic stops for a cult leader that went…maybe not as well as we’d hoped. But it was fun.

This was the really fun part. After trying to capture a cult member and interrogate them (all while holding the Demon in check), we had to go to a large gym and complete a series of tasks to capture the cult mastermind. Which turned into complete and utter chaos, and was a blast for all of us involved. It’s also the part I really need to catch up on editing.

I ended up dying in the gym after spending all mission firing Vortex discs willy nilly, and then killed three more people before the end of the mission.

Several humans took turns passing around the BFG for tagging the Demon, making for an effective counter (shutting her off for five minutes each time). Because when you don’t know where the rock is, you can’t avoid it!

This was a relatively short but fun final stand. Humans escorted the cult mastermind to the helicopter for removal, then watched as zombies poured out from under the stands of the football field. The zombies then proceeded to get everyone…well, ALMOST everyone. We technically had a human winner!

The human in question solved a bunch of the in-game clues and lucked onto an immunity spell, that had to be completed on the field while final stand was going on. Somehow, they got through the entire thing, while just standing there, as zombies ran all around them. Granted, it’s hard to call it a win when the plot says everyone else in Ohio has been zombified, but hey! They did the hard work and earned it!

And, at the end, we were told the truth – it was really just a silly cult around Tyler’s dog. Yep. Good puppy!