First, a shout out to Blaster Revolution on Facebook, who found and posted a link to the WSJ article – otherwise, I would’ve been too busy playing at the Penn State HvZ Invitational to notice! There’s always great stuff on that page, from war pictures to new 3d cosmetic kits and more.

After years of competing, Zuru has made enough of a dent in blaster sales for people to take notice. As per the Wall Street Journal (there is a paywall, sadly), Zuru has taken a significant amount of shelf space with $20 and under blasters, especially when Nerf has been making more expensive blasters, up to and including the (originally) $200 MSRP Prometheus.

Battle of the Shelf Space 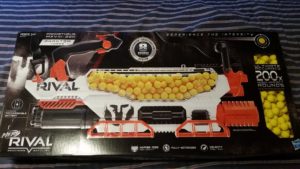 There are a lot of interesting points in the article, quoting various sources in the industry.

Interestingly, the article offers some details about Boomco, Mattel’s effort to nudge onto blaster shelves. Mattel had larger pockets, but ultimately couldn’t get a good foothold. While it had its merits and unique features, Boomco ultimately fell in three years, especially after Hasbro began pouring money into advertising and social media promotion.

Ultimately (personal opinion), it’s hard to pour products into the exact same target market and demand an adoption of a new ammo ecosystem. Other brands either use compatible .50″ darts or (in cases like Nerf’s own Rival line and subsequent competitors) deliberately target an older audience. 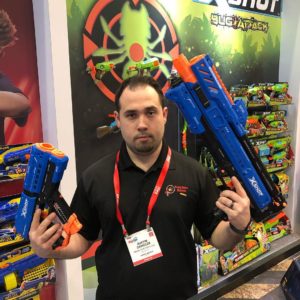 This time around, though, Hasbro has to be able to offer competitive products at lower price points. To that end,

Hasbro expects to grow Nerf sales this year with a new series of cross-branded blasters modeled after weapons used in popular videogames like “Fortnite” and “Overwatch” as well as the lower-priced line set to debut in the latter half of 2019.

As we know from Toy Fair, Zuru will be attacking on several fronts. Not only will they be offering blasters in new color schemes in a branding deal with Ninja (the professional video game player and streamer), but they will also be offering their own take on ball blasters with the Chaos line.