I typically search for trademarks more than patents, but on occasion patent searches turn up fun things. For example, US #10,295,300. It was originally a patent in Hong Kong, but finally made it through the system and was accepted in the US as well. Buzz Bee owns it, and now might have some interesting things within future Water Warriors blasters. 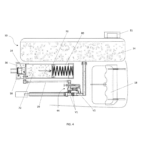 I’ll reference a post from my old blog for background on piston valves (sometimes “backpressure valves”). Dart blasters from the Nerf Hornet to the Buzz Bee Extreme Blastzooka use these valves. Air pushes a piston forward against the valve’s sealing surface; further pumping pressurizes the rest of the chamber. Firing the tank involves dumping the small amount of air directly behind the piston, usually through a “blast button”. The piston flies back, allowing the rest of the compressed air to dump out the barrel of the blaster.

Buzz Bee has adapted this for use in water blasters, it seems. The water is pumped behind a piston (to seal it) and then into a pressurized chamber, whether via spring or rubber bladder. It does all this through the standard setup of pump tube, check valves, and tubing. However, there is one more valve added to the mix. This valve acts as the “blast button”, dumping the pressurized water behind the piston back into the (unpressurized) reservoir.

The result, presumably, is dumping nearly the entire firing volume out of a large nozzle. Depending on construction, you can have make the valves to handle high volumes of fluid. Of course, one drawback is that once triggered, you HAVE to empty the entire firing chamber. You can’t manually shut off the flow before then. However, if your goal is to dump large quantities of water from a distance in a short period of time, then congratulations on doing it!

Don’t expect to be getting a CPS 2000, of course. But some innovation in the field is welcome!