Disclaimer: this was a free sample sent by Hasbro for review. Kinda.

To make a long story short, I bought one, wrote a review, forgot about it and sold the blaster. THEN, Hasbro sent me one out of the blue, and I once again had a blaster sitting in review backlog until that one got given away, and I found the draft of this review and revised it. Such is life.

The Rival Edge line (a Walmart exclusive) is focused on marksmanship, as opposed to team gameplay. The Mercury was a Kronos with a bolt handle prime, and came with a plastic reactive target. The Jupiter, meanwhile, takes that concept up a botch, with a long body, ten round internal magazine, and true bolt action; it also includes a somewhat more satisfying target. It’s not the most practical blaster for wars, but for its intended purpose it works perfectly.

What is this, a Biathlon?

My first Jupiter, after finding a home with @PeteFuzzyPete. Give him a peek on Instagram!

The Jupiter looks like something you’d see in a shooting competition, only…more toylike (obviously). The blaster has a long body with both a rail-mounted bipod and a rear monopod for getting the perfect angle. A long rail sits on top of the blaster, although the “iron sights” are sufficient. And there’s a neon yellow motif down the entire length of the blaster, with splashes of orange for good measure.

The bolt-action on this blaster does mean that it’s geared toward right handed individuals. Sorry, lefties, that’s one of those things about being a smaller segment of the population.

The blaster itself is amazingly comfortable, with a solid handle to grip, and even a large, rubber cheek rest for all the kids (and adults) using the blaster for target practice. It’s not so long as to be unwieldy for a Nerf war; you can still maneuver relatively well with it. The magazine being at the front of the blaster does make reloading take slightly longer. However, that’s just a necessity of the design – if you’re using this for rapid firing, you’re probably doing it wrong anyway. Not that I’d stop you from trying.

Nothing about the bolt-prime was uncomfortable; it’s placed at the perfect length for priming the blaster while it sits against your shoulder – no awkward arm placement or anything.

The Jupiter, functionally speaking, is a Kronos with an elongated priming mechanism and a rear-facing internal magazine. There’s nothing surprisingly out of the ordinary in this regard.

Blaster Use and Performance

The Jupiter actually exceeded my expectations. The blaster advertises speeds of 90fps for the fired balls. However, both of my blasters (at the different points I had them) averaged 98fps, closer to the rest of the Rival line.

The rate of fire, meanwhile, is a bit slower, simply due to the mechanism. One ball every two seconds is a good estimate for quickly priming the blaster and firing at your intended target. However, with ten balls, you have a decent amount of time before needing to reload. In addition, the magazine seems to have enough give to take an extra one or two balls without causing any jamming issues.

Wait, Isn’t There a Target? 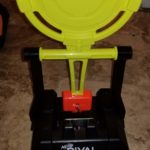 Right you are! The Jupiter also comes with a large plastic, reactive target, one that’s better than that which comes with the Mercury. In this case, instead of just a large weight at the bottom to balance, the target has exposed metal! Joking aside, the target base has a small metal plate that can freely vibrate when struck by the lower half of the reactive target. Think of those small metallic xylophone-like toy instruments you used in elementary music class, and you’ll imagine the high-pitch tone you hear whenever you hit the target.

Somewhere out there, a music teacher just melted down over my incorrect combinations of musical terminology.

In any case, it’s a lot more pleasing having the auditory cue from hitting the target than just seeing it move, It’s also fun hearing it go off continuously after extended fire from a Nemesis or Perses!

The Nerf Rival Edge Jupiter is a fun target practice blaster that still has plenty of potential for Nerf wars, provided you’re ok with taking your time between shots. It’s solidly built, amazingly comfortable, and comes with lots of nice little touches that make it worth the price. There are, or course, other options if you simply want to put ten balls downfield in a fast manner. But if you really like the form factor, the Jupiter won’t steer you wrong.