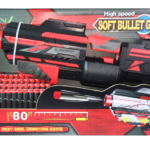 There are a series of designs that have cycled through various brands. As best as I can tell, the original creator in China was Feng Jia Toys, but these blaster have appeared under that brand, World Tech Toys, and various other labels. Now, for this holiday season, the Maxx Action line has a bunch of blasters available at Kohl’s, including one I haven’t seen in the US before. It’s called the Defender, and it’s a decent blaster – it just seems to have a higher price than I can justify for an “off-brand”. On sale, though, it might be worth a look.

The blaster seriously reminds me of the Dart Zone Powerbolt – I’ll reference Peter’s old review, as well as mine from the old blog. It was a fun blaster, and later editions had the extra cutout in the shell to allow for complete dart compatibility. It didn’t have a trigger, making it purely a slamfire blaster, but for the $20 price, it was fun.

The Defender follows a similar premise – pump-action priming compresses the spring, and advances the belt chain. The difference here is the existence of a trigger, and a selector switch. The user can choose to operate it as a normal blaster, with the spring compressed until the trigger is pulled. You can also flip the switch and make it a pure slamfire blaster. The effect is similar (but not quite identical) to that of the Zombiestrike Scravenger. The firing in this mode occurs at the end of the priming pull. The overall rate of fire isn’t that much higher, but it’s a fun option.

However, at least in my blaster, the selector switch was physically hard to move by hand. Assuming that’s the standard, it’ll be extremely hard for young kids to use it.

The blaster shell itself feels like a different kind of plastic than most blasters, but it feels appropriately thick and contoured; it’s very solid in hand. The main grip is angled and open, designed very much for being held at the hip. There are two “tac rails” of sorts, but with nothing that appears to be compatible with anything Nerf or real steel.

The belt gets loaded via a door at the top. A disc of craft foam makes the seal between the plunger tube and the belt. Note the lack of an air restrictor or valve – the blaster will be dry-firing when not loaded. The belt movement occurs on the priming handle return, as well – in single fire, the belt will move prior to the dart firing, and vice versa in slamfire.

The Defender averaged 65fps in my testing, using the included waffle tip darts, with all the darts having decent accuracy. The rate of fire was three darts per second in slamfire, and slightly less in single fire mode. The average isn’t a complete picture, however.

Notably, there was a wide range of dart velocities – I saw readings from 58 to 74. This inconsistency appears to have to do with the belt segments themselves – some are tighter barrels than others, and have better or worse dart fits.

There weren’t any misfires during testing. 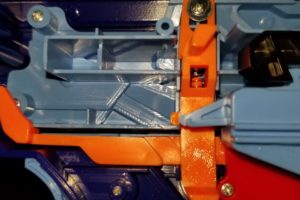 The orange plastic piece going back tilts the priming arm out of the way when slamfire is engaged.

The Defender has familiar internals for anyone who’s played with a Powerbolt. However, the addition of the selector switch makes for two major differences. One, there’s an actual catch piece for the plunger. Two, there’s an additional mechanism inside. If you look at the priming “sled”, there’s a spring-loaded tooth with a ramp at the back. When slamfire is engaged, the orange catch is moved out of the way. At the same time, another orange piece moves forward to interact with the ramp. In this way, the priming sled’s tooth is forced out of the way at the back of the prime, releasing the plunger.

Note before disassembly: four screws are hidden by pop-out panels. The green plastic on the grip and priming handle, as well as a sky blue plastic strip in front of the belt “slot”, all pop out to reveal screws. The orange cap is solvent welded in place.

I bought the Defender on sale for $24. For that, I got a fun blaster that, while not the most serious blaster, performed well enough. $30 base price may not be the most appealing, however – especially when other brands have made similar blasters that perform better for less money. If you do decide to make a spur of the moment purchase while shopping for gifts, however, the kid receiving this shouldn’t be disappointed.