Hasbro is leaning hard on nostalgia this year. Across several properties, whether they’re Star Wars action figures or Tiger Electronics games, what’s old is new again. In the case of Super Soakers, that involves a redesign and recoloring of classic designs from deep in the Hasbro vault, and releasing as a Target exclusive. After finally getting my hands on one, I can say that it doesn’t quite hold up to childhood memories. But then again what does? It performs similarly to the original, after all. It’s just the difference between seeing one at five years old, and thirty years old.

Bringing Back the Oldies

First, I’ll be a bit pedantic: There was the original Super Soaker 100, the first soaker with a separate pressure chamber. Later on, we had the XP series, which packed more power and were slightly different inside. The new soakers, despite the presence of the “XP” prefix, are based on the old blasters, not the XP series. I’m unsure why they mixed the name and blaster. Now that that’s out of the way…

The XP100 is a lightweight, solid blaster, with the modern, durable plastic you’d expect from Hasbro. It keeps the overall shape of the classic it’s based on, but has a few key differences to go along with the face lift.

For stylistic reasons, the reservoir and pressure chamber are both flattened on the sides. This, in turn, means that you can no longer unscrew the tank to remove it. Instead, the XP100 has a collar you rotate, along with grooves in the end of the reservoir. Think of it as adapting the Nerf NStrike barrel adapter concept for use in a water blaster.

The other major difference is the pump. More precisely, the pump in the remake is physically larger than the old version. Which means you can actually pump up your blaster in reasonable amounts of time! The pump handle, and its placement above the barrel, remain the same.

The blaster grip is largely the same, with a bit more contouring on the front. It should be able to fit most hands. It’s not the epitome of comfort, but it’s sufficient. Besides, you can only change so many things on a nostalgic item. 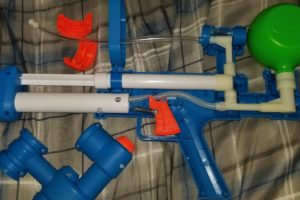 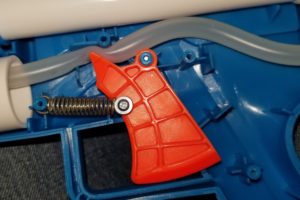 The internal workings are largely identical to the original, down to the use of a pinch trigger. People often think of the soakers with ball valves, or pull valves, but the originals simply pinched flexible tubing to cut off the flow of water. A rather strong spring pulls the trigger forward. It should be noted that this also serves a secondary purpose – it acts as a safety valve. This style trigger can only hold back water up to a certain pressure, and extra pumping results in some water coming out the nozzle until the pressure is relieved. Granted, you could try a stronger spring (if you find one) to raise that limit. But that means possibly breaking plastic under stress, or popping the flexible tubing if it can’t handle the extra pressure. I wouldn’t recommend it.

The XP100 holds 1.25L in the reservoir as claimed, and has a pump displacement of approximately 25mL. Once you’ve spend two pumps sucking water through the system, you’ll be taking ten pumps (~250mL of water) to fill the pressure chamber with water, squeezing the air inside to store the energy. Any more than ten, and the pinch trigger relieves the extra pressure.

The stream is small, but consistent for most of its range. At most, I was able to get 35ft of range at the beginning of the shot (with a few sprinkles outside that, but that seems disingenuous to count). Range drops off fairly rapidly, but the stream itself takes a good ten seconds before you’ve completely lost power and have no range at all.

Unfortunately, due to the placement of the feed hose in the reservoir (up front), you really aren’t able to pump while firing to extend your shot. As you use up more water, you’ll need to point down in order to suck in water.

The XP100 is a great return to form for the Super Soaker line. Granted, I think of things like the CPS 2000 and other behemoths when talking about soakers, but it all started with basic designs like this. The blaster looks great in the new color scheme, everything works as it should, and there’s decent range to match, even if it’s not the most powerful thing I’ve ever seen. Plus, you just can’t beat the ease of use and simple aiming of a pressurized water blaster.