One of the silliest and most exciting things at Toy Fair this year was the Fortnite GL. Sure, $60 is quite a price to pay for a Nerf blaster. However…it’s a giant missile launcher. It takes the beloved Demolisher rocket ammo type and turns it into a full loadout. Usefulness is questionable at best, but that’s hardly the point. What else allows you to fire six missiles one after the other?

Being a Fortnite blaster, the GL will of course have cartoonish proportions. However, since it holds six missiles, it’s also comically large. Oddly, the stock is small in comparison to the rest of the blaster; it’s the only real downside, being useless plastic. The rest of the blaster, however, seems to work fine.

Out of the box, the GL requires some assembly, with all six “barrels” needing installed and lined up with each other. It’s a tight fit, and will probably require adult help. After that, you just have the front and rear shields to clip in place. These are removable, though, and not needed for blaster function. Personally, I prefer losing the aesthetic to open up reloading slots.

Operating the blaster is simple. Pull back hard on the handle to launch a missile; the faster you pull, the more range you get. As with the Demolisher and other Nerf-brand missile blasters, it’s just a large, manual plunger powering the blaster. Pushing the handle forward, meanwhile, rotates the cylinder.

Performance is largely dependent on the individual; stronger users can get more range, and small kids might not be able to shoot the missiles very far. I could get up to 40′ with some shots, though.

There are also some issues with accuracy, both in terms of operation and ammo stability. Granted, it’s generally accepted that large ammo simply goes in the general direction you’re pointing. Even so, don’t expect pinpoint shots.

At last, rate of fire is nice, with one missile per second being easy to achieve. Be careful slamming the handle forward too fast, however – on occasion, going too fast makes the rotation mechanism skip. 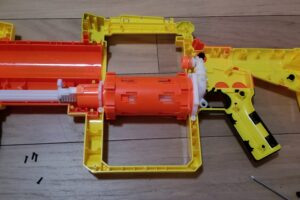 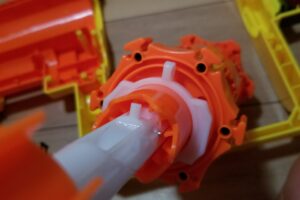 There’s not much modding potential to the stock mechanism, but it is interesting to look at. The indexing mechanism is on the inside of the cylinder assembly, and the peg that operates it is on the plunger.

Granted, there’s a few possibilities. For example, the plunger tube is large enough to house any of several blaster air tanks. In addition, someone with the knowhow could just put something air-powered behind the top barrel, and hook up a trigger mechanism.

$60 is a lot, but the Fortnite GL is a unique option for those who want it. To me, it makes sense, especially since ammo refills are now available again. But it is a specialized blaster; just make sure you’re buying it for fun, not for performance.