Every year, Lanard Toys holds a giant sale at their warehouse in Sugar Creek, MO (a suburb of Kansas City). In past years, I have always been busy with the holidays. This year, however, the sale started early – and when I had some time off work. So I got to do a solo road trip down memory lane, seeing not only NIC blasters of old, but other ones from around the world.

The warehouse (or at least the section open for the sale) isn’t in an area with lots of commercial development. It’s just a large building in an otherwise normal neighborhood, a few minutes north of I-70. There’s a sign at the entrance, and a few toy sale banners, but otherwise it doesn’t seem too special. It doesn’t scream “COME AND SEE ME”.

Stepping inside, however, I was met with shelves of dart blasters, action figures, soakers, and more. Obviously, I’m here for the blasters. But it doesn’t hurt to peek around! 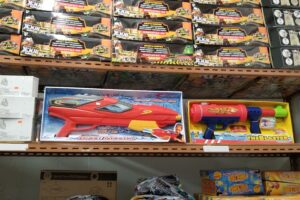 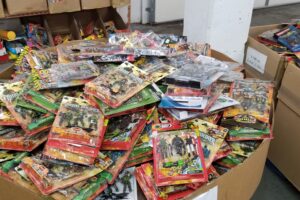 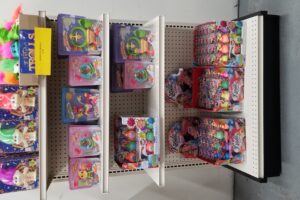 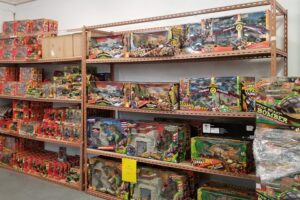 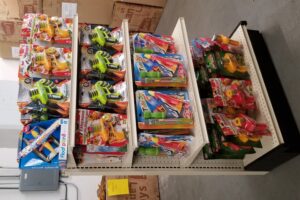 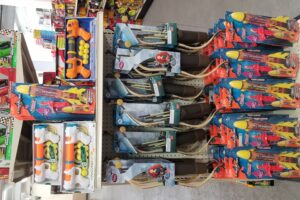 Normally, one of the biggest draws isn’t the blasters, but the collection of action figures and accessories. “The Corps!” and its various sublines have been around for decades, becoming somewhat collectable. I hate to call it the knockoff GI Joe, but you can use your own judgement. 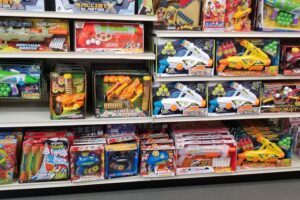 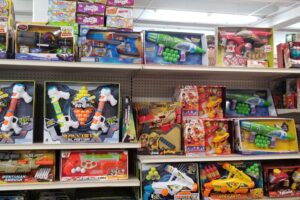 Naturally, this part made me feel like a kid in a candy store. The shelves had so many blasters, and many in multiple repaints. In addition, there were some blasters licensed for sale under other brands (Mondo blasters were sold in Europe, for example). The sheer variety of color schemes was a bit shocking, as I didn’t realize there were quite so many. The prices were even better; with everything half off, I don’t think there was a blaster above $10.

There were some things sadly missing. NIC staples like the Triple Shot weren’t present. The Max Shot and Big Salvo were also missing; to be fair, those have been out of production for many years. Even so, there were plenty of fun things, like seeing actual Clear-X blasters. That line only appeared briefly, and now that I’m home I wish I had bought more!

I didn’t go home empty handed, of course. I got a ton of Hand Cannons – with their giant plunger tubes and some spring additions and reinforcement, they’re still viable NIC primaries. And there were plenty more that I left behind. With things being marked half off, they were cheap…but after you count the gas money and time in a hotel, it starts approaching the usual retail price. 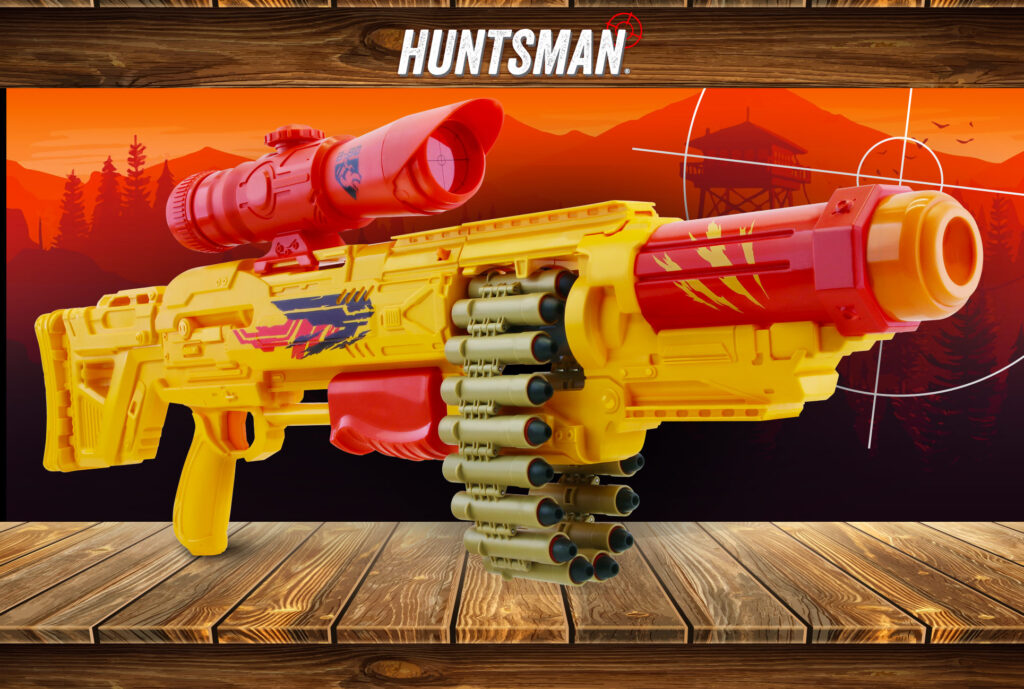 Overall, it was a fun trip, complete with a few extra stops for items like discount Vortex discs. If you somehow have time or are in the area, you can find the warehouse here in Sugar Creek, open from 9am-5pm. Check the Facebook page for more info.

Before we go, I checked the Lanard Toys website one more time, and it looks like they updated it again, including a picture of the new Belt Blitzer. Granted, other companies have done belts, but it’s nice to see them venturing into a new area. Hopefully it’s an improvement on the last model that shared this shell…