Ah, the joys of Mega magazine-fed blasters. The Centurion sold like hotcakes, but liked to eat darts. Then it took seven years for Hasbro to make another mega blaster with magazines (the Motostryke). Now, a year later, we have another one, courtesy of the Fortnite blaster line. The Heavy SR ends up being a spiritual successor to the Centurion, and in all the right ways. It’s going to be awkward trying to use it in a war, yes. But when you just want a big blaster, shooting big darts out of a magazine, it gets the job done.

First things first: all previous Mega magazines work in the Heavy SR. In fact, the included magazine is essentially a Centurion clip with aesthetic changes. So for those of us with large collections of magazines, hooray!

The Heavy SR also comes with a clip-on scope that mounts on the top tactical rail (and over the jam door, although I have yet to need to use it). It doesn’t really do anything special, but if you’re a kid with a big sniper, it’s a total necessity.

The blaster comes with a fun, red camo wrap on the outside, which I’m rather fond of. The blaster feels good in hand, although the stock could use maybe another inch or two. However, that’s adult-sized quibbling. The front barrel is separate in packaging, and must be clipped in place before you can use the blaster – there’s a lock designed for it.

Priming the blaster is fairly smooth. Unlike the Centurion, with its giant priming mechanism and geared setup, the Heavy SR uses an oversized but traditional breech. It’s like a Retaliator or Tri-Strike, but bigger.

The magazine release button, in front of the trigger, is a bit stiff. Not Elite 2.0 stiff, mind you, but still a bit uncomfortable to engage. The bipod…is honestly the cheapest part of the blaster. I wouldn’t be upset if it disappeared. Nevertheless, I guess it’s a necessary part of the experience…

Being a large blaster, the Heavy SR seems to almost demand methodical priming and firing. You could manage to fire off a dart every second or so, but one shot every two seconds was the natural rhythm I fell into.

Dart velocity, in my case, averaged around 67fps with the included darts. With Mega Accustrike darts, however, the blaster became quite usable in war, at the cost of a couple fps. I’ll have to keep my eye on closeout stores for more of those darts! 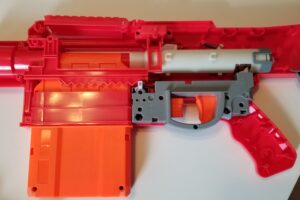 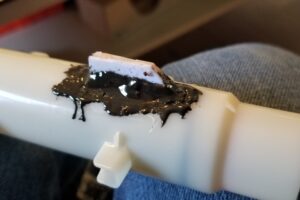 The Heavy SR has mostly solid internals. However, whether due to a flaw in the plastic or a lock not fully engaging, a thin ramp on top of the plunger tube snapped partway. It’s a thin piece, meant to engage the priming lock after the user fires. At the end of plunger travel, the plunger tube moves forward a bit, and the ramp pushes that piece up, freeing the bolt sled.

I ended up slicing up some spare ABS plastic, gluing it in place, and then smothering JB Weld just to be sure. Ideally, you could print a piece and glue it in place to help reinforce the tiny ramp. I’ll hopefully have a file up soon!

I haven’t heard of anyone else having this happen, so it’s possible I had a fluke in that regard.

The Fortnite Heavy SR does one job – fire megas from a large blaster and magazine – and does it decently well. It’s certainly more usable than the Centurion from eight years ago, and it’s a fun, cartoonish blaster to wield at wars. Whether you should get one depends on how much you like using Mega, of course. But it’s a purchase I’m glad I made!