Let’s get this out of the way: Battle Tag by Ubisoft is one of the coolest laser tag-like experiences you will never have. Yes, I said that you will never have. And that’s a shame. Initially introduced to a very confused E3 audience in 2010, the cleverly named “Battle Tag” system was given a soft release in Canada and Texas shortly thereafter. We first discovered the system in 2011, and went to great lengths to import about a dozen of the blaster/vest combo “Starter Pack” kits and a few med/ammo packs (more on that, below) from Canada, sight unseen. At a cost of about $75 per blaster/vest, it wasn’t cheap then, but now, good luck even finding them. Ubisoft has pulled all support for the system, and currently, they’re going for about $400-$500 per set on Amazon, with very few available (you may have better luck on eBay, though they were also $400 for a new set). 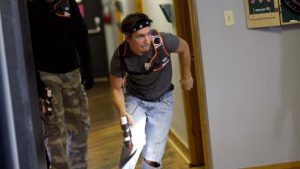 But we’re getting ahead of ourselves. If you’re unfamiliar with Battle Tag, watch the YouTube video. It sums it up pretty well. Basically, it takes laser tag, and adds real-time stat tracking, meds packs for health regeneration, ammo packs for reloads, variable game modes and… a slightly annoying (but mildly motivating) real-time announcer. The core of the system is the software, which runs on a Win7 or WinXP PC (no Macs) while the game is being played. The kits come with a “UbiConnect” antenna of sorts, that plugs into a USB port and presumably receives an RF signal from the taggers (called “T-Blasters”) that are plugged into the vests (no fancy name for those). The software keeps score just like expensive laser arcade units, with real-time tracking of each players hit/miss ratios, score and other stats. It also comes with several pre-installed game modes (like capture the flag, and one of our favorites, “Martian Wolf”), which is good, because Ubisoft hasn’t released the source code, and updates are non-existent. The initial install is slow, and each tagger has to be paired to the system. On a few occasions, we had issues with the T-blasters being recognized, and one of our taggers seemed to be DOA. But once set-up, it’s generally smooth sailing.

Games consist of 8 players (up to 40 players with 5 sensors was rumored), with varying modes of play for individuals or teams. Of necessity, of course, is a computer to run the software while the game plays, which can limit outdoor play to locations where a laptop can be plugged-in (or run from a freshly recharged set of batteries). But you’ll want to find these outdoor spaces because, in our experience, the range of the taggers and the system antenna are outstanding—the taggers seem accurate to the 300 meter distance advertised by Ubisoft, as does the 1,000 foot range quoted for the USB antenna. In addition, outdoor plays allows for interesting placement of ammo and health packs (which one registers via an RFID scanner on the blaster), as well as base units, which add to the gameplay. Overall, let’s just say the number of gameplay scenarios and options is impressive, and will keep a group busy for years, even if Ubisoft never offers a single update.

… Battle Tag is a great looking, well-built system that is incredibly fun to play, but not easy to get into 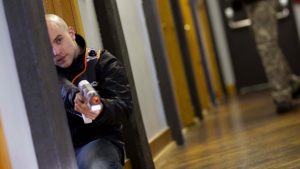 As impressive as the software is, the hardware has been equally well thought-out. In fact, the tagging units are nicest we’ve seen, apart from pro-grade hardware. They make the Hasbro “Lazer Tag” line (Phoenix LTX, LTAR, et al.) seem like the toys they are. The Ubisoft T-Blaster units are made of high-quality plastics and feel terrific in-hand. In addition, they have proven very durable, the LCD screens are easy to read, the built-in speaker of sufficiently robust quality and the batteries are easy to replace. Oh, did we mention they look fantastic? Not too sci-fi, but not afraid to look like a “gun,” either. And the sensor vest is equally stylish and well-made. It’s a bit hard to figure out how to put it on for first-time users, but once accustomed to the particular fitment, the overall usability and feel of the vests is top-notch. They don’t rub or get in the way, and they do the job perfectly. And we’ve never had a vest fail.

So, where does that leave us? Well, Battle Tag is a great looking, well-built system that is incredibly fun to play, but not easy to get into. Set-up is a bit of a pain, as is the need to have a computer to run the show. But once you’re up-and-running, games are fast and furious, and it’s likely you’ll be playing over and over until you run out of time (or energy, or both). The games are varied and the accessories and stat-tracking push the system well beyond traditional “toy” laser tag systems in immersion and fun factor. The downsides are ones that are common to laser tag (no “physical” impact of a dart or disc), and unfortunately, are also ones of extremely limited availability. In fact, if you have a set, we’d urge you to keep it and try to source a few more. As famous laser tagger Barney Stinson would say, we have a feeling Battle Tag will become legen—wait for it—dary.

*Images are property of Ubisoft Entertainment.