Tek Recon was a successfully funded Kickstarter venture backed by parent company Tech 4 Kids of Toronto, Canada. We got our hands on a Tek Recon Havok and two Tek Recon Hammerhead blasters, along with refill pack of the “NRG” (Non-marking, Reusable, Gaming) ammunition. They’re readily available at retailers nationwide, and have even been seen being sold at a discount in some stores (we got ours from Kmart and Wal-Mart).

We’ll say right up-front that these blasters look awesome on the website, and the photography and design style used by Tech 4 Kids to promote the new line is spot-on. The blasters look menacing, in a vaguely Halo-esque, not-too-distant future kind of way, with wild animal-print markings. The product branding also has a very high-tech, mil-sim look that leaves the impression that these blasters were designed by a company that has their act together and that knows their target audience. But that’s as good as it gets.

Unfortunately, with our Havok, Hammerheads and NRG rounds in-hand, the actual experience of play turned out to be a series of let-downs. The biggest problem rests with the NRG rounds, themselves. Based on what appears to be something akin to a small, fat rubber band, the rounds disappear from view almost entirely when shot, are extremely easy to lose, and seem to dissipate energy very quickly upon leaving the blaster (ironic, given what the “NRG” naming implies). In addition, when used in battle, the opponent can rarely feel an NRG round when hit, and since they are hard to see in flight, there’s very little to give a sense of actual combat or competition taking place. Adding salt to the wound, the rounds are extremely difficult to pick-up and reload when it’s all over. Since they are rubber versus stiff, they tend to roll and compress when being forced into the blaster or the clip.

…the rounds disappear from view almost entirely when shot, are extremely easy to lose, and seem to dissipate energy very quickly upon leaving the blaster

So, what about the blasters themselves? Well, they don’t look as good in real life as they do in pictures. The plastic is shiny and rather nasty looking (Tech 4 Kids claims this is a feature, as there’s some kind of “metallization” process used in the gun manufacture that allows them to refract light… but in reality, it just looks cheap). We also noticed that the green plastic used in our blasters varied in shade slightly from piece to piece, which doesn’t give confidence in the product’s quality control. We will say that we liked the rubber butt in the Havok’s shoulder stock, the metal rivets used here and there that give a feel of ruggedness, and the double-ended ammo cartridge was a cool touch (Need more ammo? Just flip it over!). In addition, we experienced zero jams with the Havok, and only a few jams with the Hammerheads. But we’ll say the dual-intensity switch (distance versus fire rate) seemed a bit gimmicky, and didn’t really add anything to the gameplay. Also, the “draw” on the blaster was very stiff, such that attempting to fire with the trigger was often nearly impossible on the “distance” setting, so pump-action was really the only option. There’s also no “cocking” or “priming” these blasters—a pull on the pump results in a shot, as does a pull on the trigger. A child would never be able to use these blasters, though we don’t expect they are the intended audience, so that’s not really a fault. The supposed “recoil” is basically non-existent (or no more significant than a typical Nerf blaster, at least). 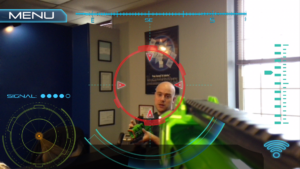 Ok, so the rounds are weak and hard to find, the blasters don’t live up to their billing… but what about the “app-enhanced team battles!” featured so prominently in the advertising? Well, the app is free, so there’s no harm in trying it out. Go ahead… try it. It lets you capture gameplay moments in real-time (using your camera), and there are color filters that simulate night vision, FLIR-style thermal imaging, etc., but none of them are actually functional. The coolest aspects are the real-time GPS (worked sometimes) and the walkie-talkie style comms feature. There’s also purportedly a way to track shots fired and competitors vanquished, but it seemed to rely on a physical press of a “button” from the blaster onto the phone screen, which we never really got to work right. And reporting of “hits” is left to the individual player, which is both inconvenient and prone to cheating (or simple mistakes—again, you’re not likely to even feel the rounds when they hit you).

In the end, we spent no more than a day or two with the Tek Recon blasters, and simply went back to our Nerf armory. But we’re glad to see another competitor in the space, and we sincerely hope Tech 4 Kids keeps working to refine the Tek Recon products. After all, Nerf has been refining their blasters since 1989, so they’ve had a lot of time to get it right. The Tek Recon product isn’t a bad first attempt by any means. It’s branded well, it seeks to do new things in the category, and it has the right kind of distribution and pricing. Unfortunately, in its current configuration with NRG rubber band ammunition, it simply isn’t much fun to play.

*Images are property of Tek Recon.