It must be hard being a product developer at Hasbro. Everyone outside the company probably thinks you sit around all day shooting darts at your co-workers, reenacting the famous “Great Office War” video. In reality, being an industrial designer, engineer, materials specialist, marketer, or anyone else involved in bringing new products to market is probably quite challenging. After all, you’ve already developed the chain-fed N-Strike Vulcan that would make Rambo proud, so where do you go from there? If you guessed something like “further, faster, more…”, you’re probably thinking along the same lines as those poor designers at Hasbro. Or, at least, that’s what we imagined when trying out the Nerf Vortex Diatron.

On its surface, the Diatron appears to be a very close cousin to the Vortex Vigilon. It has a similar, side-loading and spring-fed internal chamber (though with a 10 disc max capacity) that is operated with a thumb-switch on either side, has a futuristic sidearm look about it (borrowing from the Lazer Tag Augmented Reality series with the under-hand protection piece), has the same disc jam release, fires the same kind of XLR discs (in orange/white vs. green), and generally maintains the same run-and-gun style that the Vigilon encourages. Where the Diatron differs significantly from the Vigilon is in its “Multishot Madness” ability to fire two discs at a time—in fact, it can ONLY fire two discs at a time, which is a problem we’ll discuss in a moment.

But there is one other difference versus the Vigilon that any experienced Nerf enthusiast will notice immediately. And it’s so significant, one has to wonder if those product guys at Hasbro are planning to do more with this idea, or if the Diatron is just a one-off test-run of someone’s wacky, after-hours experiment. The difference we’re talking about is the priming mechanism. Unlike any Nerf product before or since, the Diatron is primed via a lever that folds along the left-hand side of the blaster. To prime the blaster, the user pushes the lever out to roughly perpendicular with the unit until a unique “click” is heard and felt. Then, the lever is pushed back against the body, which allows the blaster to fire once seated. While I didn’t personally find this action counter-intuitive (and come to actually like it, after a while), two other members of our staff found it confusing, and were actually completely unable to fire the blaster on their first few attempts, with several jams and misfires frustrating both of them in the process. Making matters worse, the lever itself feels somewhat breakable—as though it could easily be pushed out too far and simply snap-off or break something inside. In fairness, that has not yet happened in our experience. But it slightly blunts the fun of using this blaster when you have to worry about whether or not you might break something in the heat of battle.

One has to wonder if those product guys at Hasbro are planning to do more with this idea, or if the Diatron is just a one-off test-run of someone’s wacky, after-hours experiment. 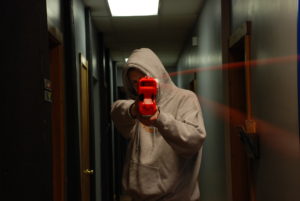 Once you get past the odd priming mechanism, however, you get to enjoy the thrill of shooting two, long-range Vortex discs at once. And a thrill it is! The Diatron launches both discs at exactly the same time, and in our tests, at typically the same overall trajectory. So it’s entirely possible to hit your target with two discs at once, or at longer ranges, to have at least one of your two shots reach the intended destination. And somewhat surprisingly, the firing of two discs with a single priming didn’t seem to diminish overall range. We were able to consistently hit mid-60 foot distances indoors (both flat and inclined), and even had a few that reached a very solid 75+ feet. Of course, at those ranges, the velocity of the discs had all but disappeared, and only one of the two discs would typically reach that distance. Still, that’s a respectable range for any blaster of this generation. And while the accuracy of shot groupings wasn’t as consistent as we’ve found with flywheel-based blasters and did show the typical Vortex arcs, we’ll forgive it for the sheer fact that you get two attempts to hit every target, and you can do so at great distances. 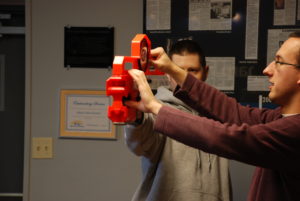 Unfortunately, the long-range, “multishot madness” ends quickly with the Diatron, as it only comes with 8 discs. And though it can store 10 discs, it comes packed with 8, which of course, encourages you to buy a pack of refill discs. It feels like a bit of a cheap move on Hasbro’s part (not unlike our criticism of the Stryfe, which came with a measly 6-dart clip), but in all honesty, the Diatron doesn’t do so well with a full 10 discs in the magazine. Filling it to the very top is quite tricky, as the magazine has a very tight fight with all 10 discs, and jamming seemed to occur quite often. So, 8 discs may be optimal, but with 2 shot out at a time, you’re spent in only 4 shots. And then you’re either running around picking up discs, or you’re leaving the Diatron aside for something with a higher capacity. Making matters worse, the Diatron inexplicably can’t fire with only a single round loaded in the clip. It requires at least 2 rounds. So, if you have 2 or more discs chambered, you’re good… but don’t get down to just a single round, or you won’t be able to fire.

And that brings us back to our hard-working product developers at Hasbro who decided to try something a little different with the Diatron. It’s a solid addition to the Nerf Vortex line in its own right (very good ranges, decent accuracy and a novel multi-shot design), but is let down by the requirement that 2 discs must be loaded at all times, and only 10 can be (awkwardly) held in its internal magazine. And that’s not even attempting to pass a verdict on the side-priming “stick” that some of us found fine to use, but others found somewhat fiddly and potentially fragile. Nonetheless, we applaud Hasbro for green-lighting something “different” with the Diatron. It’s unceasingly fun to fire two shots at once, and it’s cool that this blaster does so in a way that’s different from everything else currently on shelves. Those differences may not make the Diatron inherently better, but it nonetheless reinforces Hasbro as a leader in the category, and a company that still has the ability to innovate.