We’re still coming to grips with the whole “Zombie Strike” line of Nerf products that Hasbro introduced in 2013. While all of the Zombie Strike products sport the new lime green, orange, brown, and gray color palette, they differ greatly in their overall aesthetic. A few of the products in the range seem to have been designed from the start as “Humans vs. Zombies” (HVZ)-oriented designs, like the Hammershot and Sledgefire, which both have faux handle wraps and steampunk-esque hammer pulls. But other products like the Fusefire, Ricoshet, Ripshot and even the Crossfire Bow have a much more angular appearance, and even N-Strike embossing. The topic of this review, the Sidestrike, is part of this latter group, with its sleek lines and N-Strike Elite branding in the handle.

Regardless of its likely origin as an Elite-branded product that was re-colored to build-up the Zombie Strike product line after the dies were created (Hasbro reportedly denies this and claims this disparity was intentional), the Sidestrike is nonetheless an interesting little blaster. Of particular note is the included holster, so let’s start there. The all-plastic holster is compatible with both Sidestrike and the Firestrike blasters, but not much else. It’s ambidextrous for use on either left or right sides, and can hold up to 4 Slimline darts of Elite or Zombie Strike variety (2 on each side). It has a belt clip, but nothing on top to keep the blaster in place when things go sideways. Oh, and you’ll pay at least $5 more than you probably should for this unique accessory… but more on that in a moment.

The Sidestrike itself is actually a nice little blaster. It’s very compact, has a smallish handle, medium draw, and storage for 2 darts under the muzzle. It feels good in hand, and wouldn’t be terribly hard to conceal. But you might not want to keep it hidden, because it’s actually pretty fun to use. Not in a “total annihilation, overwhelm your opponent” kind of way, but in a “wow, this shoots a lot farther than I was expecting!” kind of way. It has a very visceral “pop” when it shoots, and the darts fire far and true. We averaged a max of approximately 62 feet over a series of shots with a 20-30 degree arc, and roughly 52 feet with zero incline. The darts were also relatively accurate, with a minimal of sidewinding and spiraling. The only significant performance downside is the fact that you only get a single shot before reloading, though the front-load aspect at least makes reloading a simple procedure. All told, we would judge the Sidestrike to be on-par with the Firestrike, Triad and Jolt in single-shot performance and overall feel and usefulness. In fact, if the Firestrike didn’t exist, this might be the best single-shot, back-up blaster Nerf currently makes.

…the Sidestrike is almost double the price of the Firestrike, depending on the retailer, and is virtually the same blaster. 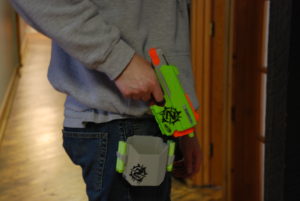 Now back to that holster. For the honor of getting a holster with your Firestrike Sidestrike, you have to pay at least $14.99. In fact, when we first saw it at our local Toys “R” Us, it was actually $19.99 (but had been reduced to $17.99 when we bought it). This was at least $5.00 more than we would have liked to have paid, and when you consider the Firestrike sells for $9.99 and comes with a light beam targeting system (gimmicky as it may be), we find it hard to believe the Sidestrike should be $5.00-$10.00 more for a simple plastic holster, 3 more darts and NO targeting system. Not to overemphasize the point, but the Sidestrike is almost double the price of the Firestrike, depending on the retailer, and is virtually the same blaster, with the same performance, same dart capacity, same size, etc. Perhaps if the holster was a more universal accessory (a fabric-based design versus hard plastic) that could hold a variety of blasters or gear, we would feel the price differential was justified. But as it stands, it’s basically a 75¢ piece of plastic with limited use… and a very high mark-up.

Here, then, is a nice little blaster that probably should have been Elite product, but was instead given the Zombie Strike treatment. But that’s okay, because it still performs well, and we can’t blame Hasbro for trying to diversify and make a buck or two. What we can blame Hasbro for doing is charging a premium for an accessory with limited utility (and likely very little cost to manufacture). It’s that little whiff of gouging that spoils an otherwise fine addition to the Nerf blaster product line… Zombie Strike, N-Strike, or whatever they want to call it.