Blame it on Daryl Dixon or Katniss Everdeen, but we’re seeing quite the resurgence of interest in the trusty bow and arrow. And Hasbro, ever one to hone-in on current events, isn’t about to miss out on the trend. Forget the original Crossbow from 1994, or even the fun-but-aging Big Bad Bow. Today, we have no less than the Rebelle Pink Crush mini-crossbow, the Rebelle Guardian Crossbow, the Rebelle Heartbreaker Bow, and the recently announced Mega Thunderbow and Rebelle Agent Bow, all set to be on store shelves next to each other in the not-too-distant future. So, naturally, it’s no surprise that Hasbro’s Zombie Strike line would also get a bow-type product of its own, which was delivered in the form of the Zombie Strike Crossfire Bow earlier this year.

Much has already been said about the origins of the Zombie Strike Crossfire Bow having likely been rooted in the Elite product line, what with its angular lines and embossed “N-Strike” seal in the handle. But you know what? Who cares. It looks great in the Zombie Strike color scheme, even if it’s missing the faux cloth-wrapped handle of other Zombie Strike products. And besides, it fits in with the whole Zombie genre better than the Elite theme, anyway (after all, how many modern-day combat operatives still rely on crossbows?). 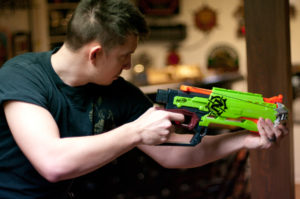 Aesthetics aside, the Zombie Strike Crossfire Bow is essentially one-half of the Nerf N-Strike Elite Rough Cut 2×4 “shotgun,” with a single vertical column of 4 darts instead of two columns. It features the same intelligent air restrictor system of the Rough Cut (and also the Triad) that allows it to “sense” which chambers are loaded, and only fire out of said chambers. Unlike the Rough Cut, the Crossfire Bow just shoots one dart at a time, and it is primed by pulling back on a drawstring-equipped priming rod versus the pump-action style of the Rough Cut. It’s a fairly intuitive and intelligent system that’s both easy and fun to use, if not particularly quick. That being said, we did manage to mimic a Slam-fire action with the Crossfire by pulling back on the priming rod just enough that it didn’t catch the trigger mechanism, which would allow the user to sloppily fire off all four shots in quick succession with varying degrees of force. But pull just a tad too far, and the trigger would catch, bringing things back to normal single-fire operation, so we don’t recommend this faux-Slam-fire for in-game use.

Its raison d’etre is to provide its user with a means to quietly and quickly subdue an opponent… and to do so in style.

But let’s be honest. The Zombie Strike Crossfire Bow isn’t really about firing devastating volleys of darts to overwhelm an opponent. Its raison d’etre is to provide its user with a means to quietly and quickly subdue an opponent… and to do so in style. Of course, this being a Nerf blaster at its core, it’s really no more silent or accurate than any other blaster, but it sure does look great in use. Speaking of which, we averaged flat, shoulder-height shot distances of nearly 45 feet, with up to 62 ½ feet possible at a 30-degree arc. Accuracy was no better or worse than most other Elite blasters (which is to say, generally good, but typically with at least one shot from each grouping veering wildly off-course for no apparent reason), and the rate-of-fire was a little over 1 dart per second, with long pauses after all four darts were shot and the user had to re-load. This being a front-load blaster, jamming was a non-issue.

From a design standpoint, we really like the Zombie Strike Crossfire Bow, though it does have a few idiosyncrasies. First, the weight of the blaster is entirely ahead of the grip, making it very front-heavy (something Hasbro accounted for with the under-barrel handle). In addition, though the blaster itself has quite a narrow body, the bow portion makes it wider than expected, and therefore somewhat unwieldy in close-quarters combat. Still, the see-through slats in the handle and bow arm are cool, and when paired with a shoulder stock from the similarly green-shaded Vortex Praxis, the overall feel is pretty badass… it’s a modern take on a classic weapon that we just can’t help but find appealing.

Overall, this is one of those blasters that you don’t buy because of its outright performance. You buy it because of the feeling you get from holding and using it. The visceral “pop” that you feel when launching a dart from something with a string is cool every time. And the intimidation factor of staring down an opponent with this crossbow-like weapon in-hand is matched by few blasters available today. So yes, the Crossfire Bow might be a rather crass attempt to grab a few sales from the burgeoning toy bow market. But we’re ok with that, because this is a blaster that looks cool, is fun to use, and feels like the sensible addition to the Zombie Strike line that it is.