There are many paths that can be taken in a review of the new Nerf Zombie Strike Longshot CS-12, which is essentially a re-color of the original Longshot CS-6 introduced under the N-Strike label in 2006. That near-legendary CS-6 version featured the first use of both a direct plunger system and the now ubiquitous Nerf clip system, and is generally considered to be the predecessor of the Elite line as a whole. So the appearance of a new-for-2014 Longshot with a Zombie Strike aesthetic was a very exciting development for the Nerf Internet Community, particularly among those fond of modding, since the original CS-6 version was significantly (and rather easily) improved with some changes to the internals. But rather than review the new Zombie Strike Longshot CS-12 based on its historical context or modding potential, we’re going to review it based purely on how it performs today, as a stock blaster released in 2014. After all, that’s exactly what most consumers will do when they see it on retail shelves right next to Demolishers, Thunderbows, and Slingfires… admittedly tough competition for a blaster that is essentially 8 years old.

But before we get into how the new Longshot CS-12 performs, let’s review how it differs from the original Longshot CS-6. Most obviously, we have the new Zombie Strike color scheme, which is a bit more garish in-person than it originally appeared in photos. In addition, the collapsible bi-pod is absent (as noted by the leftover mounting “stubs”), as is the original version’s front-mounted blaster/barrel extension. On the plus side, we get a larger, 12-dart clip versus the original 6 dart clip. And this time around, the Longshot is a Target exclusive in the United States (as many Zombie Strike products are, initially). And although we had originally assumed the internals would be upgraded to “Elite” performance levels like other Zombie Strike blasters, this notion was dispelled during our Google Hangouts session with Nerf execs, when we were advised the only performance difference would come from the use of Elite darts versus the original streamlines. But we’ll have more on that, in a moment. 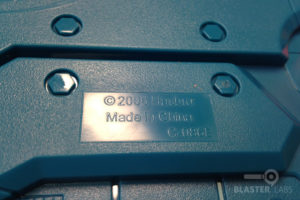 Seeing the new Longshot CS-12 in leaked photos, we were stoked. The overall look was bold and aggressive, and the colors seemed new and exciting. In the flesh, however, it’s a completely different story. The blue color of the body is decidedly more “aqua” in tone than most photos (even ours) would suggest, and the orange striping in the muzzle region is a sickly, thinly-applied shade of pale, salmon-like orange that is completely different than the scope, clip, and other intense orange bits (and that we’ll also note is painted rather sloppily, with overspray noticeably evident). In addition, the black color of the handle seems a bit random, since the grip under the muzzle that used to be black is now that gross salmon-orange color. And what happened to the “cloth” handle wrapping and other Zombie Strike detailing that used to at least attempt to give the Zombie Strike range its own look? Apparently these were thrown-out on the alter of manufacturing convenience, since this is quite literally the exact same product mold as the original Longshot CS-6 (right down to the “2006” markings). Hasbro execs told us they wanted to re-issue some old favorites, which is all well and good, but this sloppy execution feels more like a crass attempt to placate Target with an “exclusive.” In short, we wished it looked even remotely as good in-person as it does in photos, and that at least a modest degree of effort had been applied in the implementation of its aesthetic makeover.

Ergonomically, there’s nothing new here versus the original Longshot, so you’ll either like that or you won’t. We didn’t have any huge complaints, and we actually liked the shorter overall dimensions without the barrel extension, though the collapsing function of the shoulder stock is somewhat pointless, since its range is limited (and we didn’t find it comfortable in the shorter position, anyway). The clip release is still only on one side, which some might find less than ideal. And the faux scope is complete garbage, with plastic optics that are so distorted, you might as well be looking through the bottom of a canning jar. Otherwise, though, it’s a reasonably well-balanced piece that’s easy enough to hold and use. And it’s built with the same quality plastics as all Nerf products, even if those plastics twist and creak under use a bit more than some modern designs. 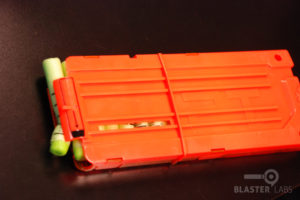 Knowing the Zombie Strike version of the Longshot hadn’t really been upgraded internally, our expectations of its performance potential was tempered. Even so, we were disappointed by just how badly our copy of the CS-12 performed. Our indoor range testing was sporadic, to put it kindly. First shot fired…  15 feet. Second shot… 41 feet. Third shot… 10 feet. Houston, we have a problem. Fortunately, after repeated attempts and with a good arc of roughly 35 degrees, we were averaging in the 40-foot range with a max distance (hit only once) of an improbable 52 feet. But most of our max distance shots landed right around the 50 foot mark. And even then, roughly 1 out of every 8 or 10 shots was basically a complete dud, with darts spiraling like a helicopter out of the barrel and landing only a few yards away. So we’ll be generous and call it at 50 feet.

It was hard to get a true accuracy judgement because of the inconsistency of the ranges, but we’ll just say it was no better and possibly a little worse than typical Elite-firing blasters. And that’s likely because the velocity of the darts coming out of the barrel was a rather weak 45 feet-per-second (on average). We hit a max speed of 51 feet-per-second, and a low of 43 feet-per-second. This isn’t crazy for an N-Strike product, but it’s clearly not up to the newer Elite speeds. So when you combine these low velocities with the fact that one out of every few darts comes out in a suicidal death spiral, it’s hard to call that “accurate.”

Sad to say, but the above shortcomings are basically the “good” points about this blaster’s performance. Because where the Longshot CS-12 is bad, it’s really bad. In an attempt to get a decent rate-of-fire, we not only discovered this blaster doesn’t like to be hustled, it may actually have some inherent design flaw that prevents it from firing consistently–period. More than any other blaster we have tested to-date, we had an alarmingly high amount of jamming problems. We simply wrecked a ton of Elite darts, at one point having as many as three (3) darts all jammed up in the breach and barrel at one time. We removed the clip during one of these instances to discover a dart with it’s tip pointing at a 45-degree angle upward (!), with the back-end still in the clip. And more than half of the dozen darts that came with the Longshot now have foam chunks missing from their bodies–in fact, we laughed at how we could readily see microscopic foam bits flying out of the barrel along with the darts as we fired. And yes, we fiddled with the clip alignment, etc., and no amount of noodling around seemed to change anything. 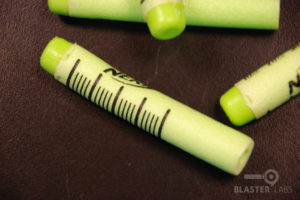 Perhaps it should go without saying, but with the aforementioned jamming issues we encountered with the Longshot CS-12, rate-of-fire was not this blaster’s strong suit. Here, the jamming issues were at their absolute worst, with any attempt at firing quickly being stunted by at least one jam. Nonetheless, with enough persistence and by slowing down our priming and firing sequence to what seemed like a comically slow pace, we managed to finally succeed in firing off 12 darts in 16 seconds. But it was the hardest we have ever had to work just to get a consistent, error-free test in that regard, with jams typically occurring with a frequency of about one instance per clip. We ended up replacing about half of the darts that came with the Longshot with undamaged Zombie Strike Elites we had on-hand, just to keep things as legitimate as we could.

Unfortunately, things don’t get any better for the Zombie Strike Longshot CS-12 in the value department, because ours was $34.99 at retail, and we can think of many, many blasters that operate much better for a lot less money. If this was a “novelty” blaster being released solely for collectors or something, and it was priced at $19.99, then it would at least be a reasonable enough purchase to buy for the different color scheme, and of course the modding potential (which is huge). As it stands, with the slipshod re-color, the reliability issues, the mediocre performance, and a price that’s only $5 less than a Demolisher (which can hit 70 feet and shoot 4 darts per second), the Zombie Strike Longshot CS-12 is simply a bad value, any way you cut it.

But is at fun, at least? Well, the Longshot CS-12 does feel good to hold, and it does have a certain nostalgic aura about it that we dig. Pulling back the priming lever is still enjoyably tactile (unlike most everything flywheel-based). And we even like the recoil of the spring as it unloads, which is a feeling you just don’t get with most newer designs. But it the end, it’s just so frustrating to use and underwhelming in performance that you don’t really even want to bother with it. And the fact that it’s rather ugly doesn’t encourage you to even attempt to live with its faults just for the “cool” factor. 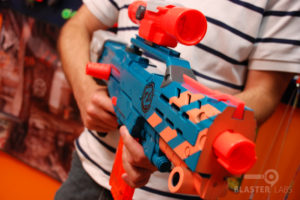 Now, we know what you’re thinking… maybe we got a dud. Maybe we got that lone Longshot CS-12 that just had something amiss. Sure, that’s possible. But how many times should we give Hasbro a pass on early production unit problems? How many of us were burned by the first year Centurion dart chewing? Or how about those low serial number Slingfires that didn’t go the distance? Or what about the fact that we have two early production Magnus blasters that can barely clear 50 feet? It’s almost getting to the point where this is becoming an expectation, or a the very least, a far too regular accident. And while we’re venting, we almost can’t help but wonder if early adopters aren’t basically paying Hasbro to be guinea pigs, unwittingly helping them iron out their design and quality control problems. It would be one thing if the blaster either worked, or it didn’t. But our Longshot wasn’t blatantly “broken” in any way we could definitively gauge, it was just annoyingly unreliable. so we doubt most consumers would even think something was wrong. They would just get what they get, and that’s it… dart destruction, jamming, poor range consistency, and all. Since our unit was bought with our own cash from a store shelf at a Target in Lancaster, PA, we can easily say this really is exactly what a consumer would have gotten.

To say we were disappointed with the Longshot CS-12 is an understatement. We fully expected this to be one of the surprise hits of the year. Instead, it just ended up being one let down after another, despite how hard it tugged on our nostalgic heartstrings. Though as we were reminded via the good folks on Reddit like “Foam Data” and “Lord Drac,” the original Longshot CS-6 had its fair share of problems too, including a poor dart tooth design and slow rate-of-fire (and really only came into its own in the hands of modders). So perhaps it’s our own fault for expecting the 2014 version to somehow be competitive with blasters of today. And in the end, that’s the one very good thing about the Zombie Strike Longshot CS-12: it reminds us just how much progress has been made in 8 years, and makes us happy we can now get products from Nerf that are a lot more fun, for a lot less money.