With the success of the Nerf Zombie Strike Hammershot, it’s no huge surprise that Hasbro might look to create another one-handed, hammer-action blaster. And that’s just what we’re getting with the Nerf Zombie Strike Doublestrike, which bears no small amount of resemblance to the classic Remington Model 95 Double Derringer. It’s a great concept, and a nice alternative to the bulky blasters many companies are producing. But we found the Doublestrike to be one nagging flaw shy of being the perfect pocket pistol for which we yearn.

Even before it’s taken out of the box, the Nerf Zombie Strike Doublestrike makes a good first impression. The retail package is mostly open, allowing potential buyers to try out the hammer action right in the store (sans actual dart firing, of course). And the box design is pure Zombie Strike goodness, with a deft balance of Zombie grit mixed with bright, fun colors. It’s very eye-pleasing, and just goes to show how far behind most competitors are in virtually every aspect of bringing quality blasters to market, all the way down to nailing the shelf presence. Of course, opening the actual box and removing the blaster seems to be getting harder and harder all the time (BOOMco is the worst), but overall, the shelf-appeal and packaging of the Doublestrike is spot-on. 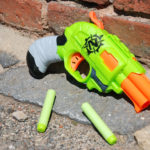 Out of the box, the Doublestrike doesn’t disappoint in the aesthetic department, with the aforementioned Derringer style double-barrel muzzle, bright colors, and cool Zombie Strike branding (hooray for actual paint instead of stupid stickers!). We also love the faux handle wrap, and the “cut out” side chamber with Nerf detailing embossed. It’s another thoughtful, balanced-looking design, which is what we’ve come to expect from the Nerf brand.

Ergonomically, the Doublestrike lives up to its “pocket pistol” billing, with a decidedly small handle that really only allows for a two-fingered grip (plus one on the trigger). If your an adult with average-sized hands, your pinky finger will be left sitting uncomfortably on or below the bottom of the handle. But a bigger issue is the hammer pull, which is small, and very uncomfortable to use. Unlike the Hammershot, the Doublestrike does not invite you to pull the hammer repeatedly. It’s somewhat awkward to reach in this application, and isn’t particularly easy to cock. It’s a bit of a chore, actually, which isn’t something you want in a hammer-primed blaster.

Using the Zombie Strike Doublestrike should be fairly simple. Thanks to the use of a “Smart AR (air restrictor)” system like that seem in the Elite Triad and Elite Rough Cut 2×4, one can fire a single dart from either of the two, muzzle-loaded barrels. Simply pull back on the hammer with a thumb, pull the trigger, and blast away! Or, so one would think. In practice, however, there’s one big problem: the Doublestrike’s cocking action allows the hammer to be pulled just a bit too far down, and when it comes back up into the cocked position, a small bit of air pushes the dart forward, unseating it from the chamber. It then becomes impossible to fire correctly. Perhaps there is a tolerance issue or other quality control problem, but this happened to us over and over. The only remedy was to keep one hand in front of the blaster to hold the dart(s) in place, while the other hand is used to prime. Here’s a quick GIF to illustrate the problem:

So much for dual-wielding, then. But what about actual performance? We found the Zombie Strike Doublestrike to be the epitome of a mixed bag in most measurable parameters. For instance, we were able to hit ranges of 55 feet, 60 feet, and all the way up to 65 feet reasonably easily. However, shot accuracy was poor, with the typical Elite swerving characteristics on full-display. And for whatever reason, it actually seemed to be a bit worse in that regard than most Nerf products, including the very similar Nerf Elite Triad (which uses a similar Smart AR system). Thankfully, with this being a muzzle-loader, it’ll be easy enough to use denser, more accurate darts from another brand (Buzz Bee’s Extreme line of darts come to mind here).

Dart velocity also showed a wide range of variance, with a low of just 43 feet-per-second, all the way up to a speedy 69 feet-per-second. We took 20 shots, and the average chrono speed ended up being a steady (but not stellar) 60 feet-per-second.

When it comes to rate-of-fire, the Doublestrike is also just “ok.” Because of the uncomfortable hammer pull–and especially because of the aforementioned issue with air being pushed back into the chamber on cocking–we had a difficult time getting repeatable, sequential shots. Our best effort got us 6 shots in 10 seconds, but without any kind of accuracy. And we found the hammer “fanning” technique that we used with the Hammershot to be virtually impossible in this application (at least with any real distance or accuracy of which to speak).

At just $10 at retail, the Zombie Strike Doublestrike isn’t a bad value, but it’s not a good one, either. And with products like the Nerf Elite Strongarm regularly spotted for $12.99 or less, one does have to wonder if there’s a bit of a “newness” tax at work here. We wouldn’t be surprised to see the Doublestrike being sold for $7.99 in the not-too-distant future, which we feel would be much more appropriate given its size, modest performance, and meager 2 dart pack-in.

The Doublestrike is a very cool-looking, well-build blaster that is a nice addition to the Zombie Strike line. lt has reasonable (if inconsistent) performance for its size, and it’ll definitely make a handy back-up weapon. But the issue we faced with the priming action pushing air back into the chamber is a deal-breaker in our book. It requires a second hand to keep darts from popping out, which essentially defeats the point of this being a hammer-primed, one-handed blaster. Perhaps we just ended up with yet another early production model that didn’t have all the kinks worked out, and most users will not experience the same issue we did. But until that proves to be the case, we can really only recommend the Doublestrike for its size and its looks, not for its utility.