Edit: While WalcomS7 no longer writes for Blasterhub, we encourage you to view the content on his Youtube channel!

Ever since the Nerf MEGA line was released, things have gotten more interesting in the foam-flinging ecosystem. Big darts with bigger springs and bigger plungers for the biggest performance. The initial launch was rocky with the dart-chewing MEGA Centurion, but now things have finally settled with the line delivering a few promising blasters. With the first fully-automatic flywheel powered behemoth blaster in the line clocking in at $80, could the MEGA Mastodon be worth it? Well, the entire blaster could be summarized in one way: an unforgettable experience. 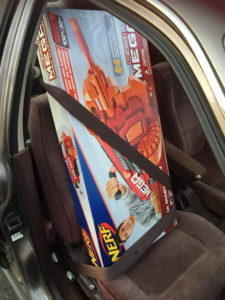 When I initially found the MEGA Mastodon in stock, I called the nearest store and asked them if they would hold one for me. When I saw the five-foot nothing girl struggling to carry this box up to the counter, I instantly started to giggle: the box is massive. Even carrying this thing out to the car and preparing for the trek home was an event. Fitting of such a blaster (it’s supposed to be one of the biggest blasters ever released), “MEGA” is not painted on it’s side as much as it’s completely molded into the plastic. Featuring a 24-dart, rotating barrel with full-auto flywheel power, the Mastodon is nothing to be scoffed at.

This blaster packs some decent value: 24 MEGA darts in the box, a rather nice carrying strap, and some extra plastic bits such as shields and plastic railings to protect the dart drum and bulk-up the blaster, and a thin yet serviceable carrying handle. The plastic pieces all snap on with little effort, with only the grey drum shields seemingly permanent while the others can be removed. The massive rotating turret itself comes in three pieces that slide together and, in my experience, seem to only fit together in one-way to limit any potential screw-ups. While the plastic shielding looks to be non-removable after snapping in, the bottom rail piece is completely removable, if it’s not to your liking. To power this beast, you need to feed it six D-cell batteries. Six. That’s going to cost you another $8-14, depending on where you’re shopping for batteries, and adds a ton of weight to the already massive blaster. It’s a good thing it comes with the carrying strap (which is very similar to Nerf’s own bandoleer, minus the dart or magazine holders), because fully loaded, this blaster is not only bigger than a child, it weighs about as much as one. It’s nearly impossible to hold this by the grip one-handed without that strap, so it was a great addition in the box.

The performance of the MEGA Mastodon is impressive considering the batteries it taps into. The firing speed is great, surpassing that of the Nerf N-Strike Elite Rapidstrike of lore. The actual power and distance are in-line with the rest of the MEGA series, but it is using flywheels, which is something different compared to every other MEGA blaster. The time it takes for the flywheels to rev-up is pretty lengthy, but these are issues that could be fixed by rewiring with a more competent battery source. The blaster also features active-breaking, so the motors do wind down quickly. Operation is about as straightforward as it gets: just load up the open-faced drum, pull the flywheel rev trigger until the motors reach maximum spin, and pull the trigger to fire off darts in automatic fire. While the rate of fire is impressive, it isn’t entirely hard to rattle off single shots either. 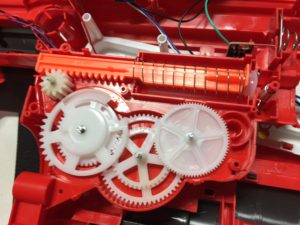 Something unexpectedly awesome is how the blaster actually bucks and kicks with each shot, giving it recoil and adding to the overall experience. The reasoning for this becomes more clear once you open the blaster up, which may be easier said than done because of some solvent-welding located in the grip of the blaster (requiring some cutting and marring up the beautiful blaster shell). Once inside, you’ll see a few things. For one, there’s a big empty space for some unknown reason. Two, there are lots of wires. Three, there are gears. The gearbox that drives the full-auto feature is powered by a single motor but incorporates some massive (but beautifully designed) gearing to index the rotational turret and prime back a firing pin, of sorts. Once the gear slips, the firing pin hits the back of a dart, which flings it into the flywheels, giving it power and sending it off at your target. Just the flywheels themselves are 2-inches across and concave to give the darts the traction they need to fly forward, with the gap being fairly generous between each flywheel (something you might not want if you’re looking for more power).

Because of it’s massive size, there’s plenty of room for integrations of other blasters somewhere down the line. Flywheels can be overvolted to produce faster spin and deliver more power to the dart, and motors can even be replaced completely to add some more torque to the dart. While you may be tempted, perhaps increasing the firing speed isn’t the best option here as the drum takes some time to load and only holds 24 darts. But that’s not to say the gap the drum encompasses can’t be used to adapt a magazine well from something like the BuzzBee Boss or Tyrant to convert it into a quick-changing magazine reloading option. The Mastodon is a large blank canvas just waiting to be art’d upon, so who knows what the future holds?

If all that mod potential just passes over your head, don’t fret: the Mastodon is a very competent stock blaster. Fast firing speed, good ranges, and the ability to top-up the blaster on-the-fly because of it’s open-face drum means you can deliver intimidation to whatever stands in front of the barrel. The question still remains though: is it a good value? After all, the blaster is very expensive. After the apparent failures and questionable value of the Nerf Rhinofire, Cam ECS, and Centurion, it’s good to see an expensive blaster that offers so much. In my mind, the experience of having such a thing is well worth it, and the blaster is good enough to keep around and use when the foam needs to fly. If you can’t purchase one yourself, at least go out of your way to try one and feel the sheer glee that comes just from seeing it in person. Just hope you’re not the one staring down the barrel.

Too many words for you? Not enough time-traveling Nerf backstory? Watch my silly unboxing and teardown here. Want to see more of those beautiful internals? I’ve got all those pictures here.