Nerf. Buzz Bee. BOOMco. These and others are established brands that put out new blasters each year, many of them with great performance. Some blasters, however, are completely overshadowed by the big brands. They may be relegated to odd sections of the toy department, or may simply appear and disappear with little fanfare. The Glow Show Sticker Launcher by Moose Toys is one such product. Hiding among either the craft-type or science toys, it has spent over a year on shelves and is now being placed on clearance for as little as $8. Grab one while you can, because these fun blasters pack a punch!

The blaster itself is simple to understand: you load the sticker-bearing d 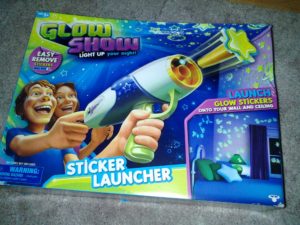 art, prime the blaster, then fire at a vertical or horizontal surface. Three AAA batteries power the charging lights on the blaster if you want to make the stickers glow before launch. Alternatively, you can switch on a mini projector and display rockets and other designs on the wall, traveling through your newly created evening sky.

The sticker dart, as it turns out, is identical in size to Nerf MEGA darts and Buzz Bee XL Distance darts. When these darts are used, basic “Elite” ranges of 75′ are easily obtainable. Opening up the blaster reveals even more surprises. 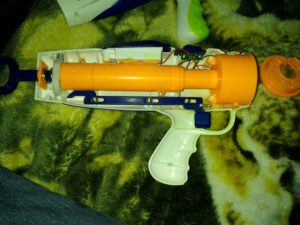 Inside the shell sits a rather large plunger tube. To be precise, it is 1 1/8″ inner diameter, and has 3 11/16″ of plunger draw, resulting in 3 2/3 cubic inches of volume used to fire your dart. Roughly speaking, that’s three quarters the volume used in a Nerf Longshot.

The spring is decently strong, and the plunger seal is 100% perfect in every Sticker Launcher I’ve fired. The handle is adequate (larger hands may need to leave the pinkie finger hanging), and the shell has plenty of room for replacing the plunger tube if the owner elects to modify the blaster to its full potential.

The barrel mounted to the front of the plunger tube has a safety valve contained within; as with most blasters, you need a loaded dart pressing back against the valve if you want it to fire. 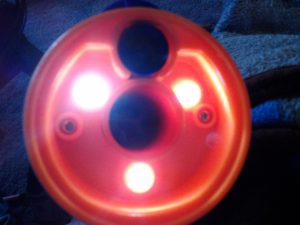 The LEDs on this blaster are decently powerful, and are meant for making stickers glow before launch. In practice, the wide tip of the sticker dart blocks most of the light from hitting the sticker design. For those of you not using this blaster for the stickers, you have a blaster with an integrated flashlight for nighttime play or any setting where it is going to be dark or low on light.

The projector does its job, and includes a small plastic lens for focusing images on the wall from several feet away. It’s not meant to make large projections by any measure, so don’t expect anything spectacular. It is a kid’s toy, after all. 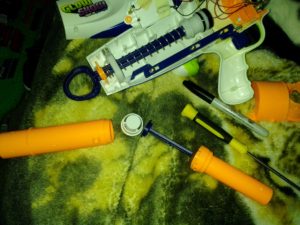 There are many easy things that can be done to improve this blaster. Removing the air valve and replacing the spring can yield 100′ ranges with Mega darts (at an angle, of course). Replacing the stock barrel with one meant for Elite darts or stefans can make those 100′ shots possible without any incline whatsoever. With a larger plunger tube, this blaster could easily support a hopper. And the existing LEDs could be replaced with stronger ones. At the original price of $20, the Glow Show Sticker Launcher was a reasonably priced pistol, packing lots of power. On clearance, there’s no reason not to buy at least one.