I must admit, seeing the Outbreaker-Bow first announced on Snapchat, didn’t excite me all that much as it appeared to be just another unoriginal, gimmicky blaster. Now that I’ve got my hands on the Out-Breaker Bow, let’s see if it can possibly offer more than just being another revolver blaster.

Included with the Outbreaker-Bow are five zombiestrike darts, an instruction sheet and bow-arms that are required to be attached onto the blaster. The bow arms will not be removable once they have been attached on. 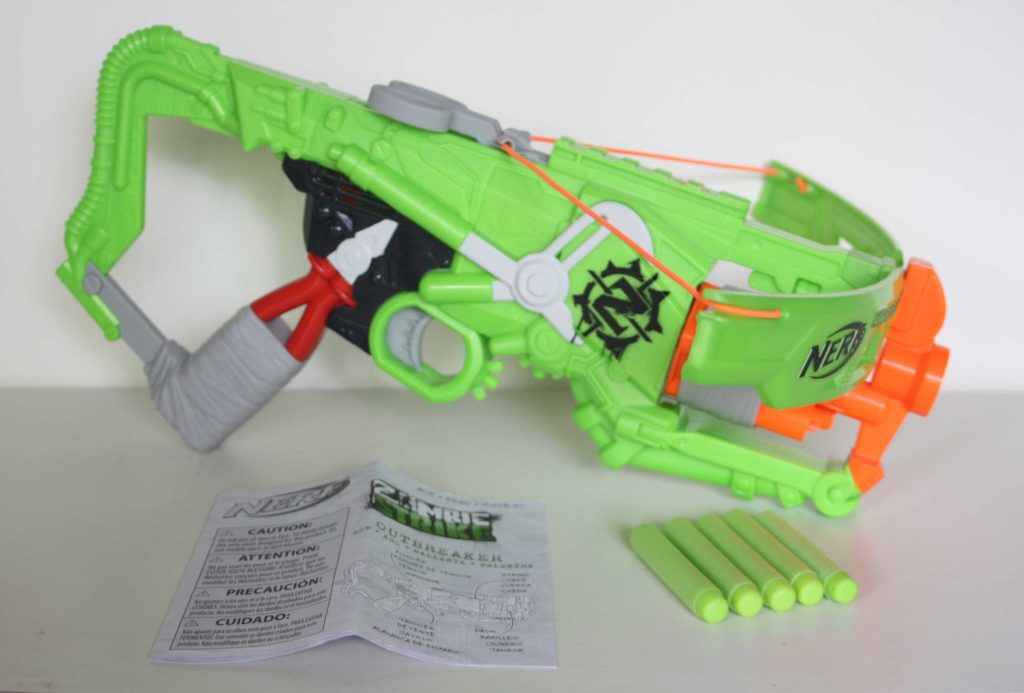 Like the Zombiestrike Clampdown, this blaster is designed to look like as if it was made in the toolshed. It’s filled with nuts, bolts, pliers and even the priming handle is meant to be a pair of scissors! I really dig this design by Nerf as I think it creates a stronger zombie-apocalypse feeling. Since this blaster is a grey trigger model, some of the colours  will differ from your standard orange trigger blaster, such as the grey scissors. 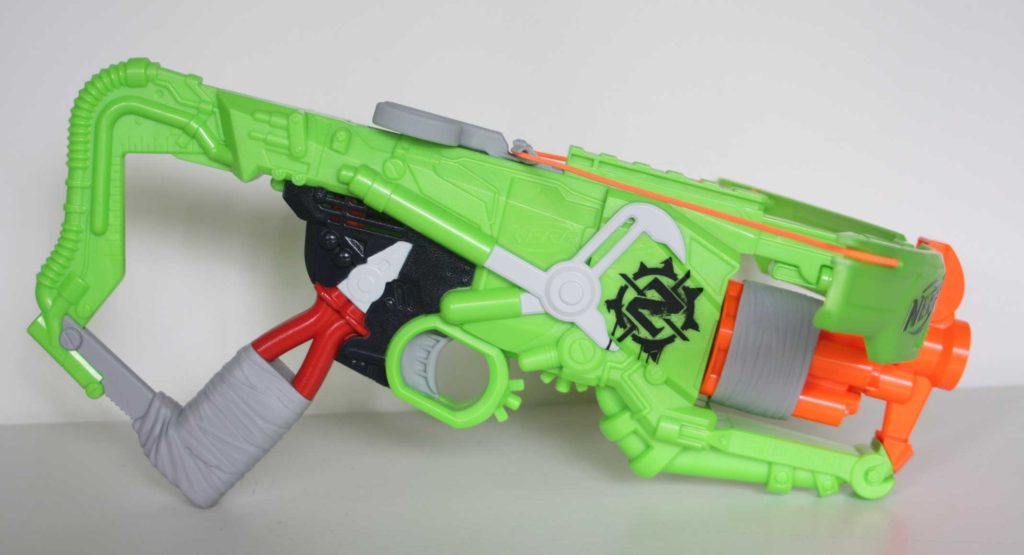 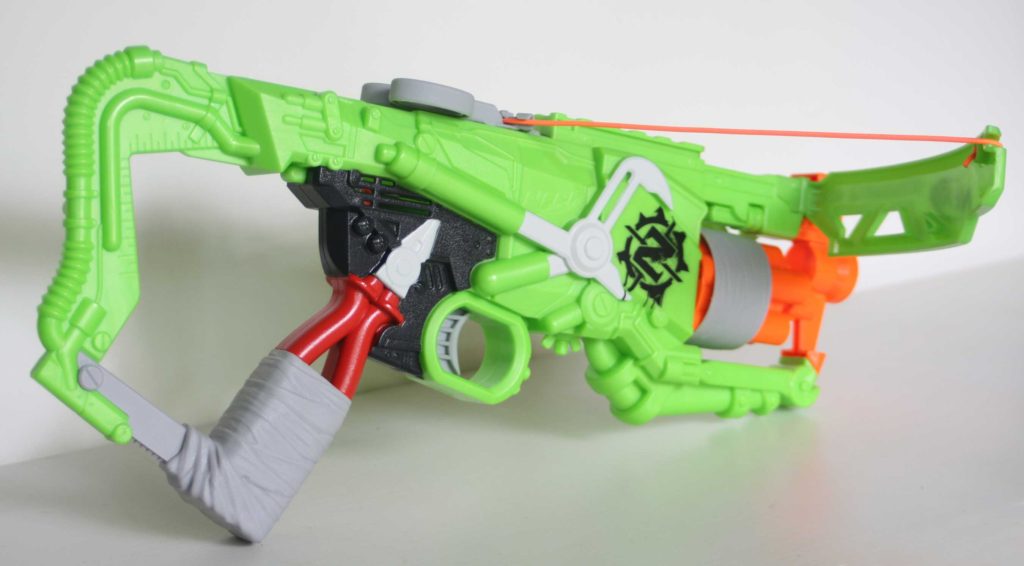 However the ergonomics of this blaster is where it falls short. Usually a handle of a Nerf blaster is curved in a way to fit the user’s hands but with the Out-Breaker Bow, it’s not the same. When holding the blaster it feels as if all the weight is lying on your middle finger, making it an uncomfortable blaster to hold. The hand-guard is another gripe of mine, as it doesn’t give your wrist much freedom space (image below, displays my point). In fact, the whole backend of the blaster is useless, since nobody is going to rest the butt of the blaster on their shoulder. I doubt even a small child would. Since the holes on the scissors are quite small, your fingers are pinched when pulling the plunger back. The bow also comes with one tactical rail on the top. 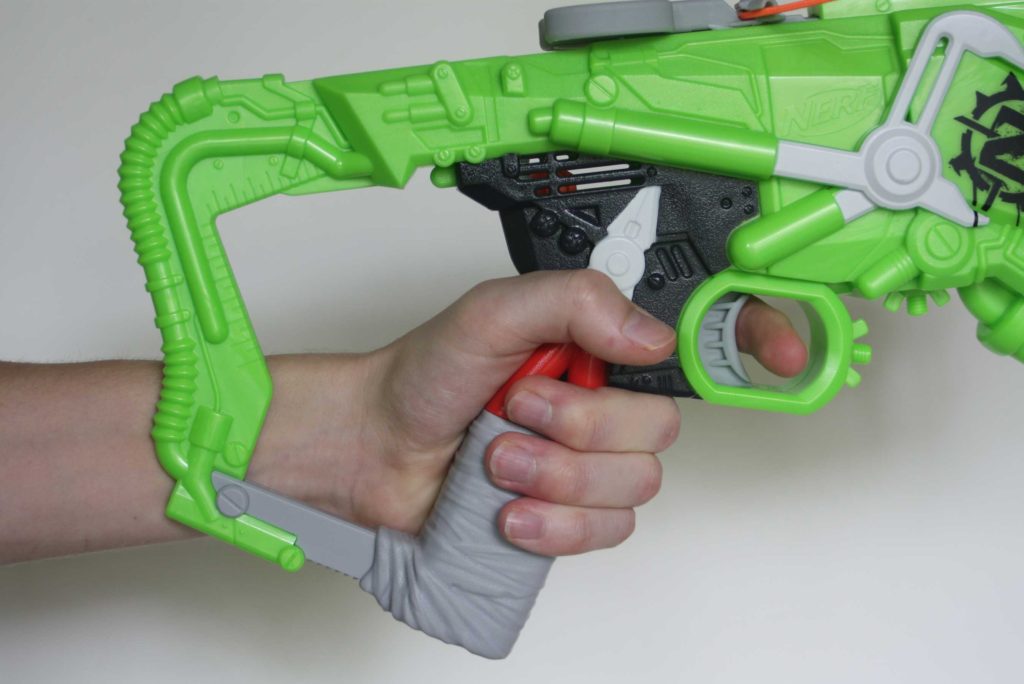 To function this blaster is what you’d expect. Load 5 darts into its cylinder (yes one shot less than the Strongarm) and pull the scissors back to prime the blaster. Unfortunately, the cylinder, drum, or barrel, whatever you want to call it, does not flip out like a Strongarm.

I’ve noticed a lot of Zombiestrike blasters have been very poor in performance, especially the grey trigger versions. However, I’m happy to say that the Out-Breaker Bow is on par with most elite blasters. Most flat shots reach around 12-13 metres, similar to a Strongarm. 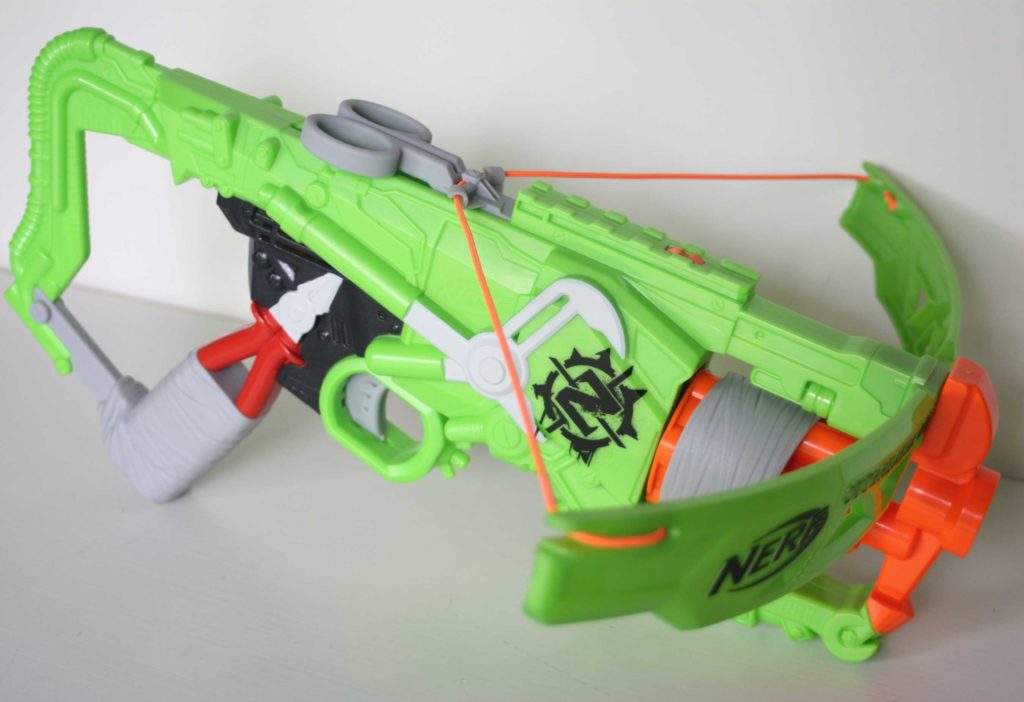 Now I’m sure many of you are thinking, I’m quite happy with my Strongarm/Hammer-Shot, so why on earth do I need another revolver? And you are exactly right. The only reason why anyone would purchase this blaster is either because they haven’t already got a Nerf revolver or they really appreciate the aesthetics of the blaster. On the positive side, this is definitely the best crossbow blaster from Nerf. For two reasons. 1. The Crossfire-Bow was a terribly weak blaster and 2; nobody wants to buy a girly crossbow from the Rebelle series (maybe some, but you get my point). I guess if you have a strong fondness towards Crossbows, I’d recommend the Out-Breaker Bow. If you are interested in buying this blaster, it’s $25 at K-Mart (Australia) and $20 in the US. Considering the price of a Strongarm and Hammer-Shot is around $15, I’d suggest waiting a little longer for a sale and purchase the Out-Breaker Bow for $20 AUD. Hopefully you have benefitted from this review and wish you a happy New Year!

Prefer a video review? Check out my YouTube clip. Skip to 2:28 to see the blaster in action.