During the 2017 Hascon Event, Hasbro revealed a number of exciting new Nerf blasters. If you’ve been keeping up with the leaked Nerf news, you may already recognise some of the blasters that were displayed. With all that said, there were still a few surprises. Unfortunately the BlasterHub team couldn’t make it to the event but thanks to social media and Nerf YouTuber, LordDrac, we’ve got a good glimpse of what was shown off.

Posted by the official Nerf Facebook page, here is an image of four Nerf blasters that were displayed at the event. 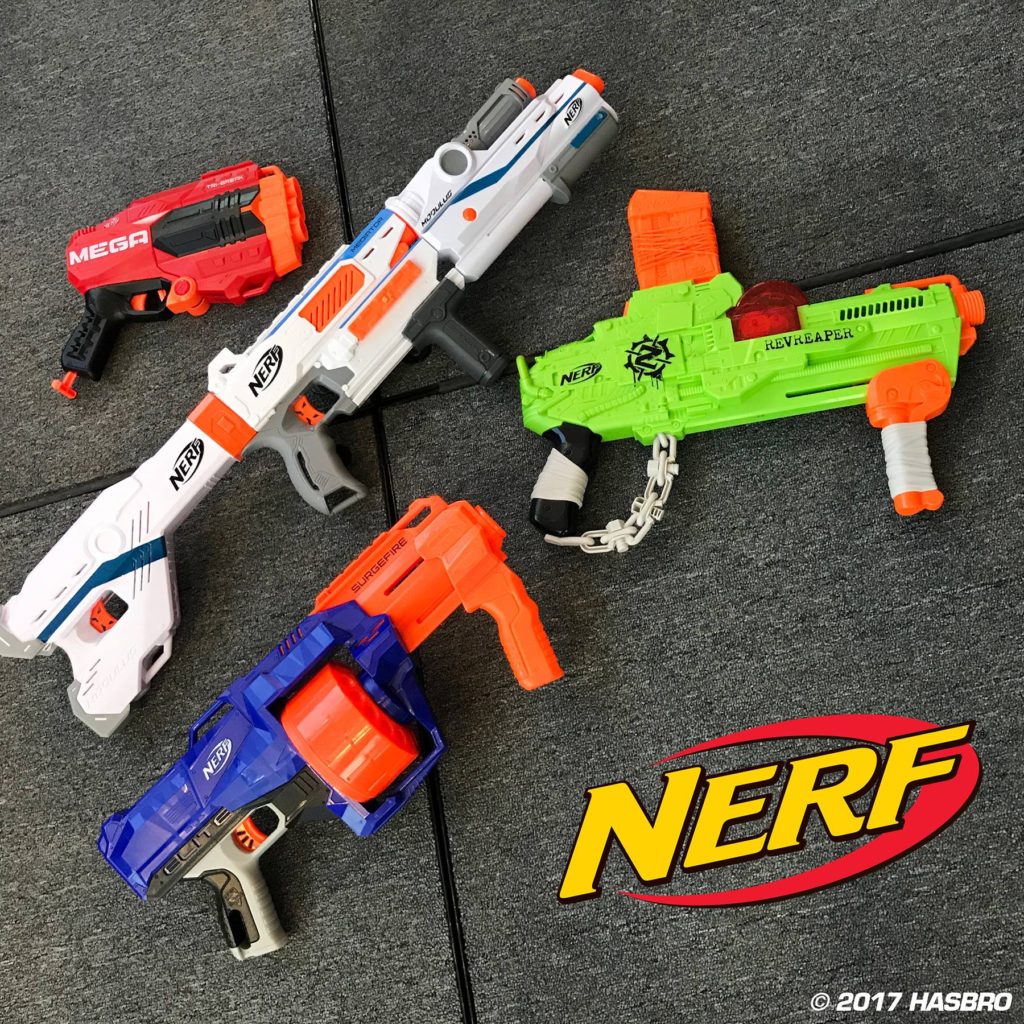 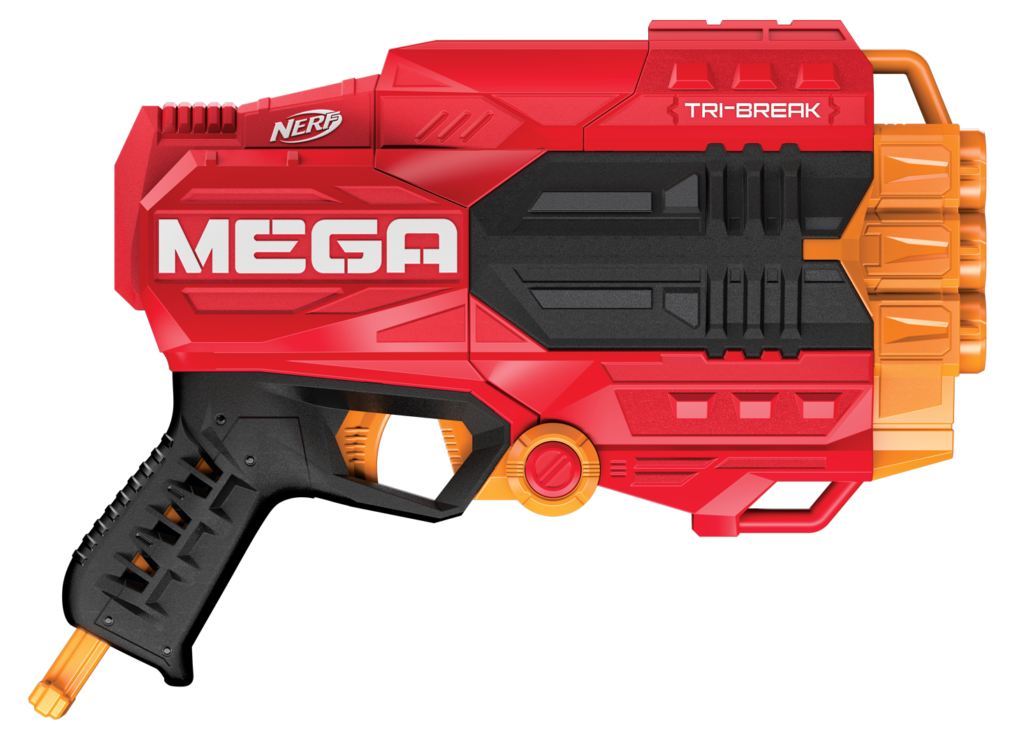 To put it simply, this is pretty much a Mega Triad, however you load it like a shotgun since you can break the front part of the blaster. It’s quite a beefy blaster for a three-shot pistol but it’s certainly got the intimidating factor. 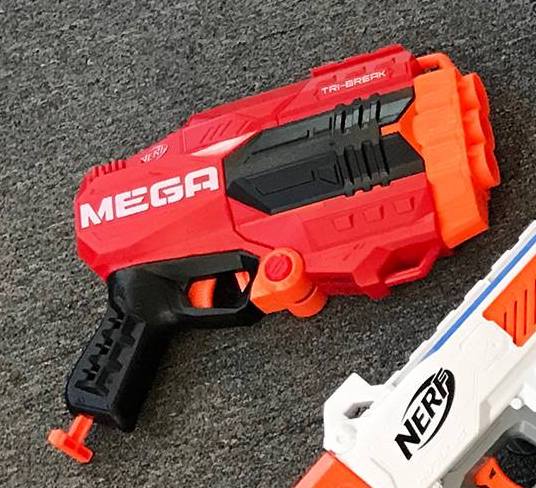 Customization has met its match! The NERF MODULUS MEDIATOR blaster has numerous attachment points for accessories within the MODULUS system which features over 1,000 different combinations. The MEDIATOR offers pump-action and slam-fire blasting so battlers can be ready for anything that comes their way. Slide the clip into the side of the blaster and unleash fire! Attach the MEDIATOR barrel and MEDIATOR stock (each sold separately) to create the MEDIATOR XL blaster for ultimate fun. Package includes blaster, clip attachment, 6-dart clip and six Elite darts

Below, we have the Modulus Mediator in its full form. The core unit of the Mediator is very much like a Rampage (or Raider) as it features pump-action, slam firing and a side-loading magazine. If the Mediator doesn’t strike your fancy, you might however be keen on its attachments (which are sold separately).

The front attachment barrel piece is quite innovative in design. Beneath the grey barrel, it contains an air-powered triple-shot shotgun. You can even use this attachment piece as a mini pistol shotgun when you rotate the grey barrel to act as a handle. If you’re confused what I’m writing about, just check out Drac’s video of the blaster. The Mediator stock is also super practical, as it holds a two-shot, hammer-action pistol (very similar to the ZombieStrike Doublestrike). It also has a belt clip, so the whole stock attachment can be used as a holster!

The MODULUS MEDIATOR barrel attachment is an epic upgrade to any battle! Convert the barrel into a blaster featuring pressurized 3-dart blasting power! Flip the handle to switch from barrel to blaster, pump, and fire to release a triple-dart burst. Package includes barrel attachment and three Elite darts. 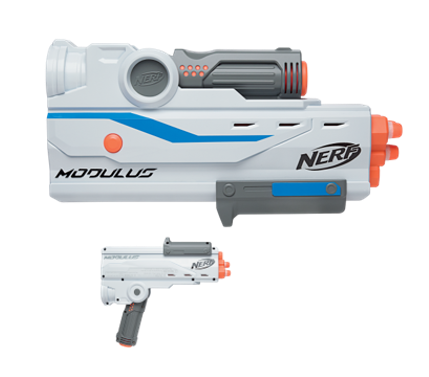 Upgrade firepower with the MODULUS MEDIATOR stock attachment! Hidden inside the stock is a double-barrel blaster firing one dart at a time with hammer-action blasting power. Dart storage and convenient clip makes the MEDIATOR stock a must for the battlefield. Package includes stock, blaster, and four Elite darts. 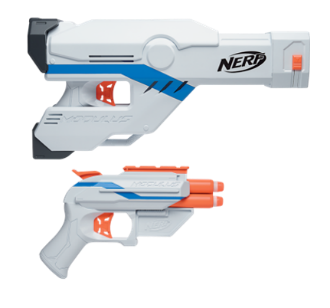 The zombies are getting stronger, but so are the survivors battling them. The NERF ZOMBIE STRIKE REVREAPER blaster has no trigger, just pump the handle once to fire a dart at the oncoming zombie herds with ease. With a visible gear mechanism, battlers can watch the gears turn as they launch the darts. The top-loading clip fires 10 ZOMBIE STRIKE darts to keep the zombies at bay. Package includes blaster, 10-dart clip, and 10 ZOMBIE STRIKE darts. 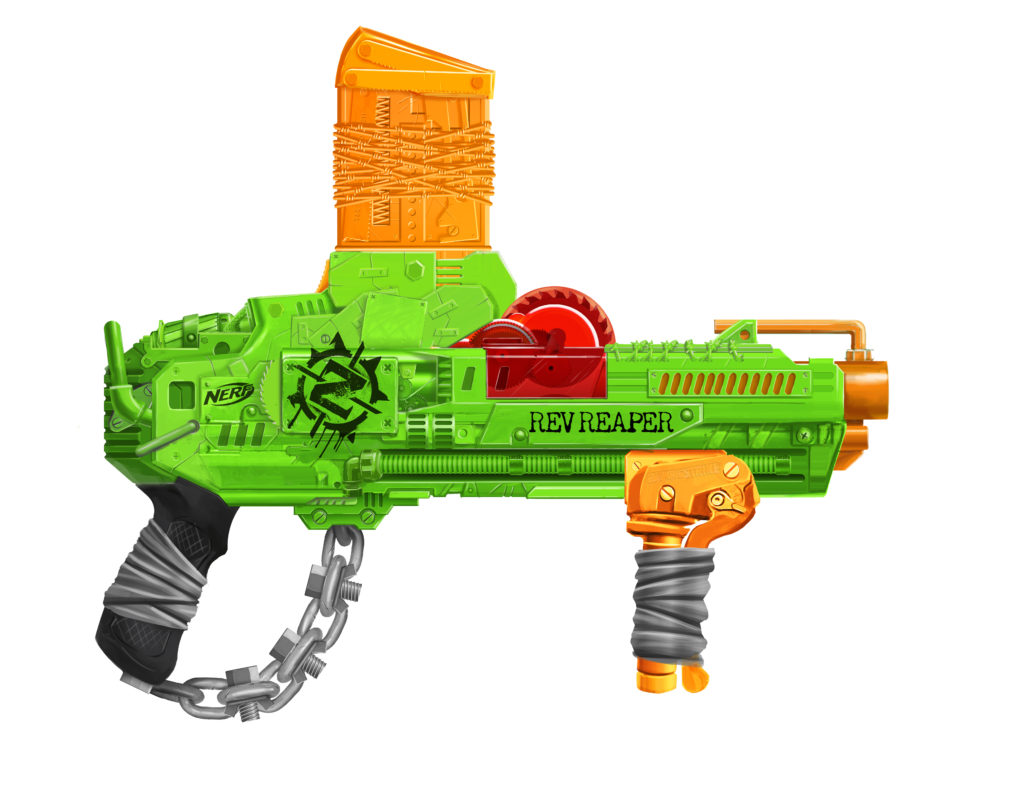 Here we have another previously unknown blaster – the ZombieStrike Revreaper! What’s unique about this menacing blaster is that it is manually powered by flywheels! Instead of pulling a trigger, users will simply pump the handle to launch out darts. It might not be the most war-practical blaster but it’s got some nice aesthetics and functions quite uniquely. 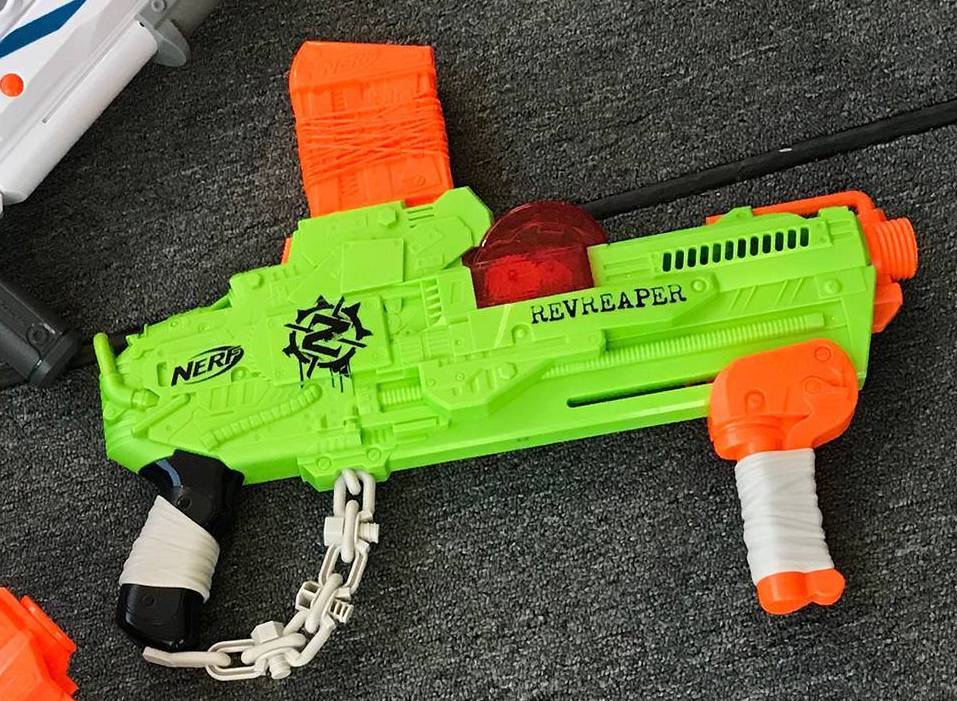 Slam-fire the competition in a sea of foam darts with the NERF N-STRIKE ELITE SURGEFIRE blaster! With a rotating drum that holds up to 15 darts, this blaster has both slam-fire and pump-action blasting. Fans can choose a target and blast one dart at a time, or slam-fire all 15 darts to pour on the firepower. Package includes blaster and 15 Elite darts.

Previously seen on Taobao, the Surgefire is pretty much an Elite Rotofury, except it has a 15-dart barrel. When I first saw the Surgefire on Baidu, I wasn’t a fan of its appearance but now that we’ve got a better look at it, we can see that its got some nice ‘tiger cameo’ on it. 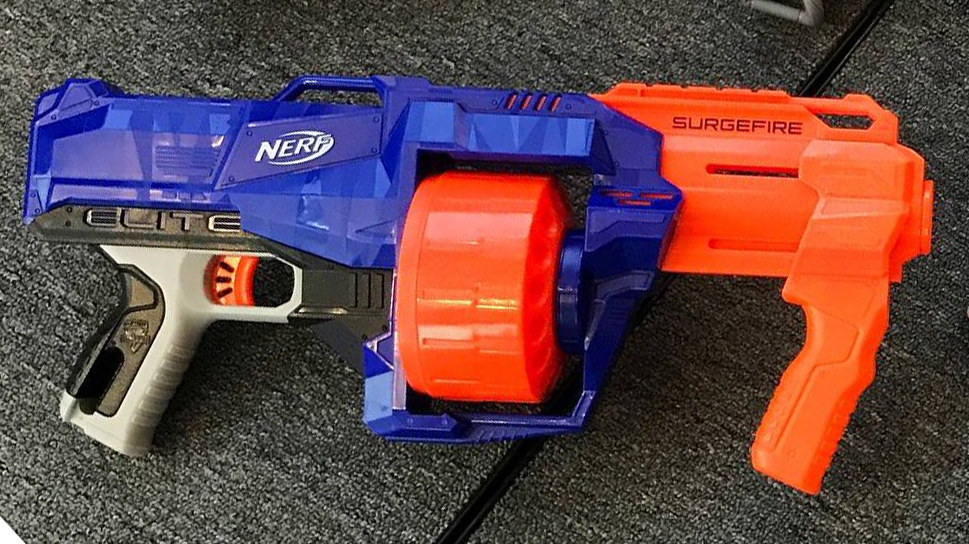 Experience the intensity of NERF RIVAL with the HELIOS XVII-700 blaster! Join the Phantom Corps with the HELIOS XVII-700 blaster and its 7-round magazine that sends high-impact rounds flying at 100 feet per second at the opposing team. Slide the bolt and pull the trigger to unleash unrivaled power! Change from the Phantom Corps Team to Team Red or Team Blue with the simple switch of the flag. Package includes blaster, magazine, seven high-impact rounds, and two team flags. 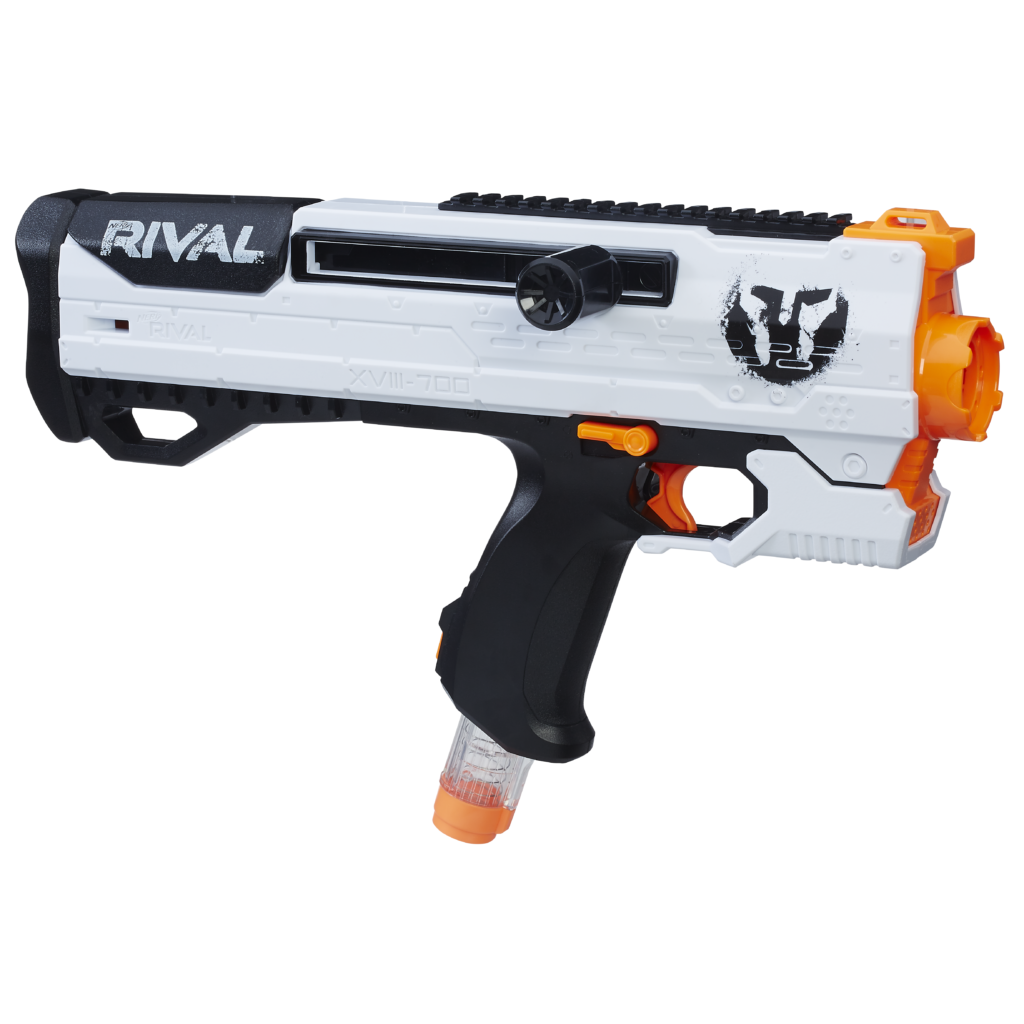 As we previously reported, the Phantom Corps Helios is exactly like the Rival Apollo, except it features bolt-action priming. It’s believed that the Helios is Nerf’s solution to the awkward priming mechanism on the Apollo. What’s also neat about the Helios, is that the bolt handle is spring retractable. 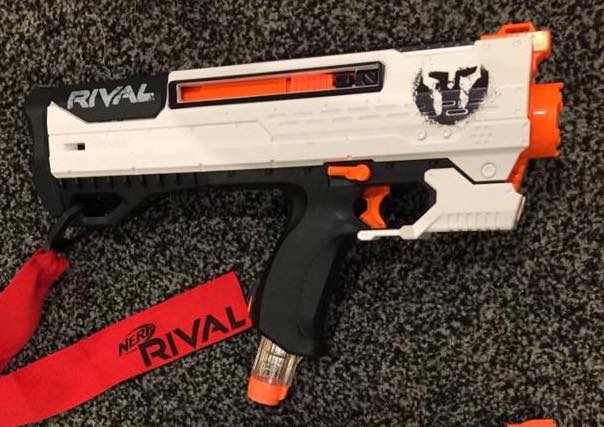 Rival battle will never be the same now that the RIVAL PHANTOM CORPS line has arrived. Head into battle as a member of the Phantom Corps team with the RIVAL KRONOS XVIII-500 blster. Open the breach to load five high-impact rounds into the blaster, prime, aim, and fire! This spring-action blaster sends rounds flying at 90 feet per second. Attach a red or blue flag to choose between Team Red, Team Blue, or choose neither to stay with Team Phantom Corps. Package includes blaster, five high-impact rounds, and two team flags. 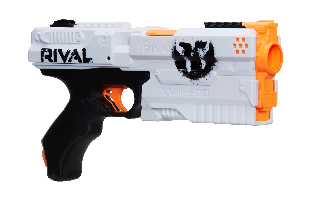 If you remember, there is also a Deadpool edition of the Kronos, which was shown at the event. 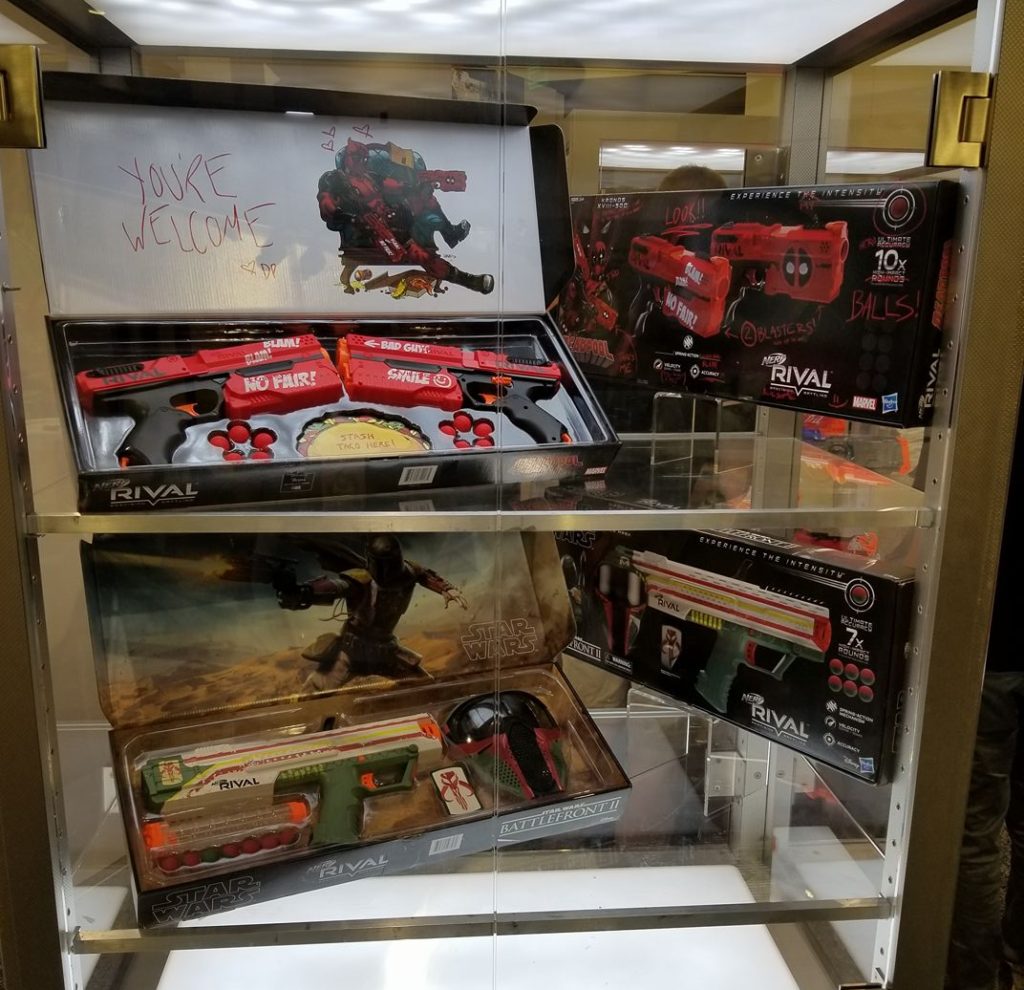 The Kronos is quite simple to use. You can load five rival rounds at the top of the blaster then pull the handle at the back to prime. It kind of reminds me of the Vortex Vigilon as it has a similar priming handle and features an internal magazine. 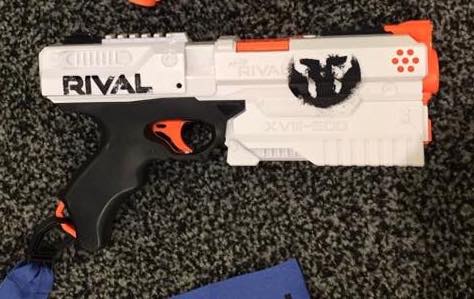 And lastly, Nerf will also be releasing a series of mini jolt re-skins, known as Micro Shots. Usually the NIC is bored with seeing Jolt re-skins but I think these new miniature pistols look awesome.

Blast into big fun with the NERF MICROSHOTS SERIES Collectible Assortment! MICROSHOTS blasters capture the iconic look of the original NERF blasters fans know and love, but in a micro, scrunched-down fun style all their own. Simply load, prime, and pull the trigger for big fun in a small package. This one-shot blaster is as fun to collect as it is to blast! Series includes one micro-sized version of the NERF N-STRIKE ELITE FIRESTRIKE blaster, NERF N-STRIKE ELITE STRONGARM blaster, and ZOMBIE STRIKE HAMMERSHOT blaster. Each package includes one blaster and two Elite darts. 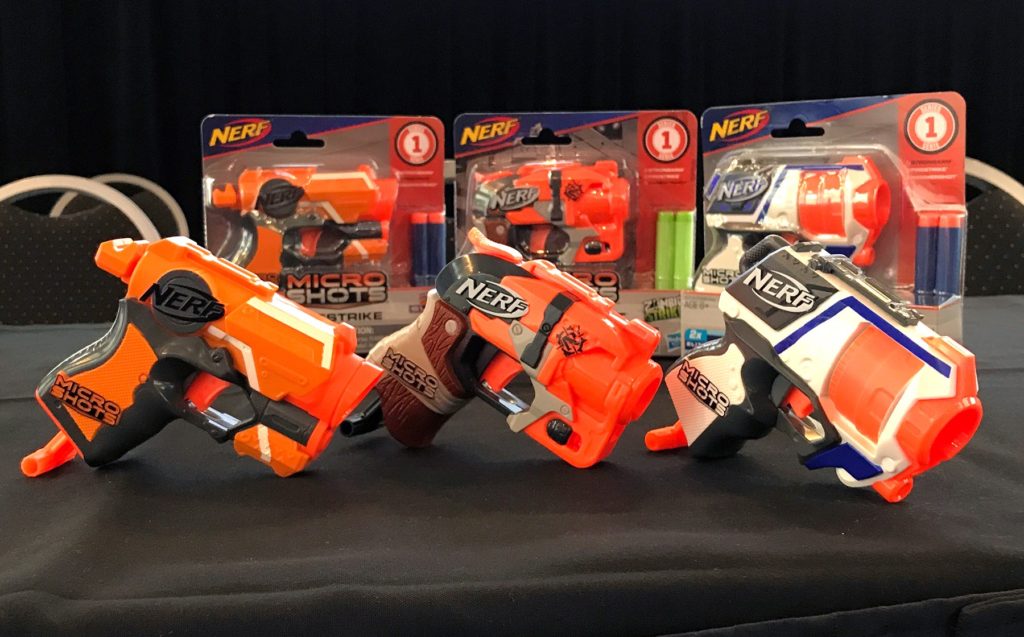 Nerf will be releasing more of these Micro-Shots in series. The ‘Owl Nerf Community’ has taken a picture from a Nerf presentation, showing off some of the other Micro-Shot blasters. 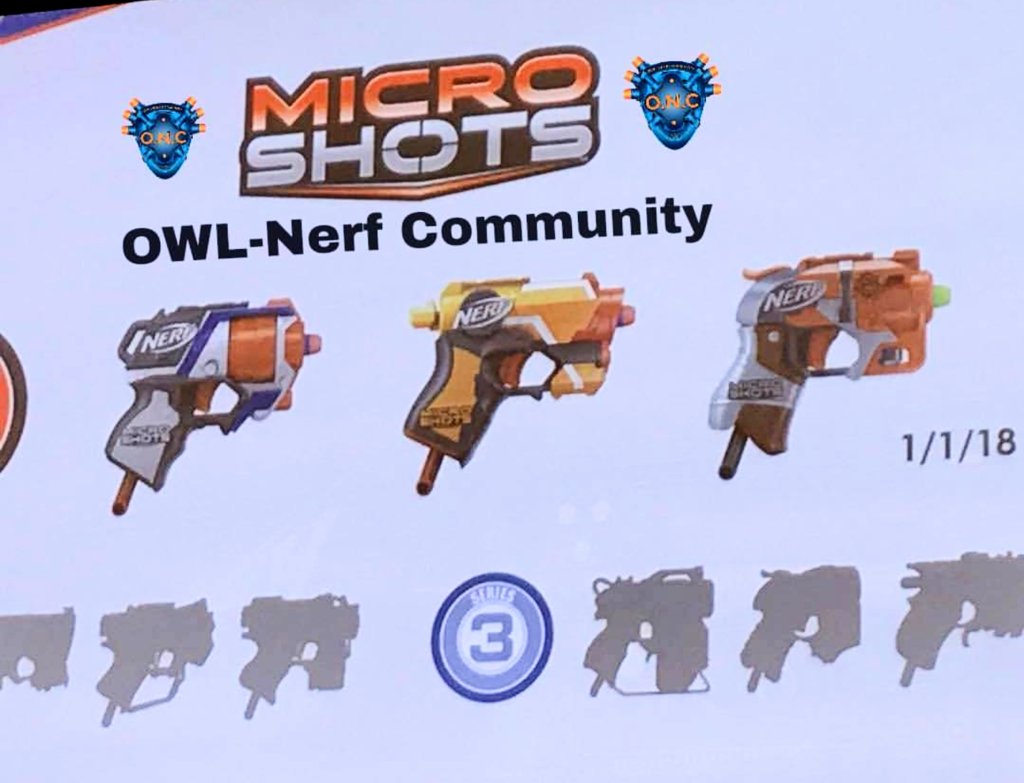 Reddit user, ‘KadrinShadow’ has pasted in the corresponding blasters of the other Micro-Shots. 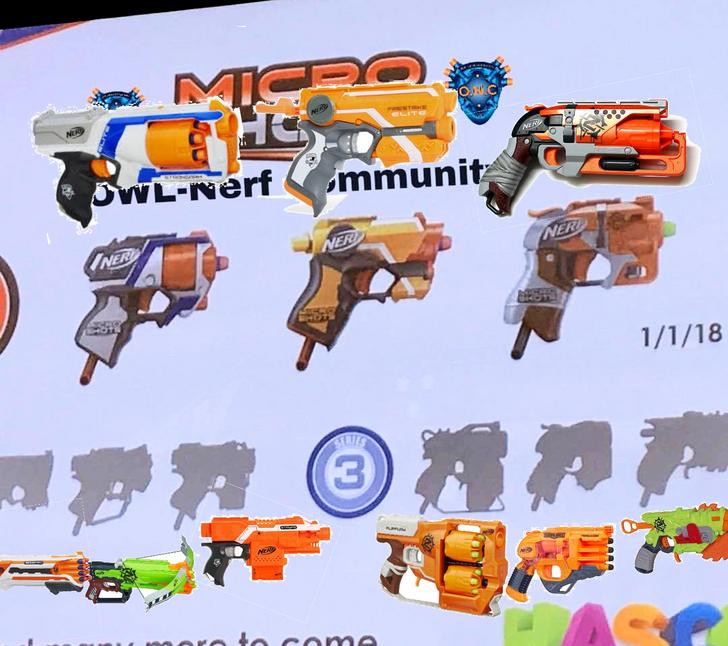 Well, that’s about it from Hascon! Looked like it was quite an exciting time! Anyway, what blaster are you most hyped for?