This is a review that’s been long overdue. I first got to see Nerf Nitro at Toy Fair. I’ve had the Motofury in my possession for many months, taken it to events like Foamcon, and even opened it up for science. Somehow, though, the car blaster got buried as work and life marched on. Only today did I come across it again, and realize just how much fun I’d been missing.

The Motofury Rapid Rally is the largest launcher in the Nitro lineup; it is also motorized for semi-auto, well, auto blasting. And for some strange reason, it’s ridiculous fun for people of any age. 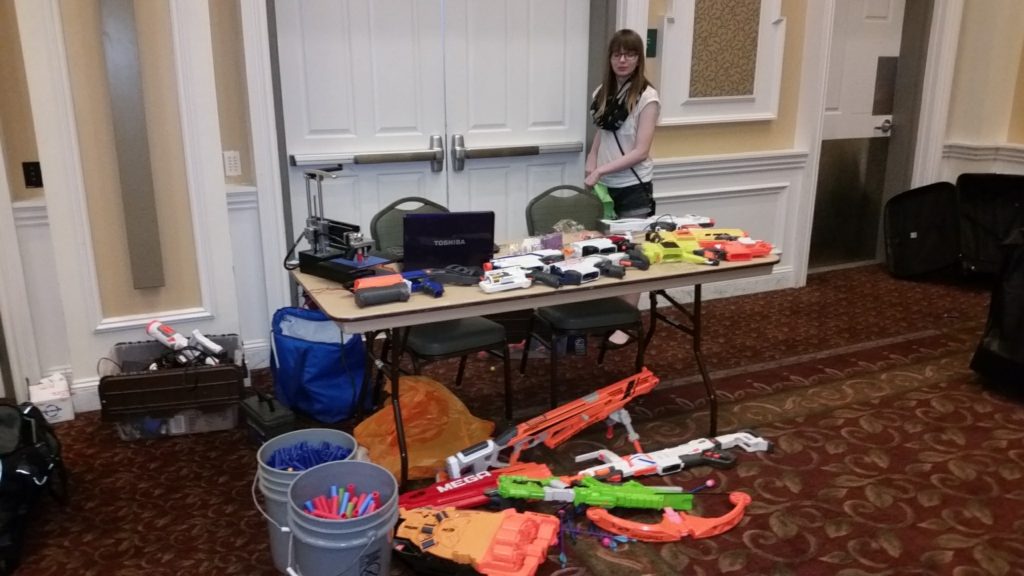 I brought the Motofury with me to FoamCon in June, along with a few other blasters Hasbro was kind enough to send me. Sitting with my friend Alice – Coatduck, I had the blasters out to give people a hands-on sneak peek. You’ll notice that the Motofury is nowhere to been seen in the picture. That’s because that particular item seemed to make laps around the entire event. People grabbed it, chased their friends with it (more on that later), and cars went everywhere. Plenty more people actually used the blaster for its intended purpose – jumping ramps and crashing into things. 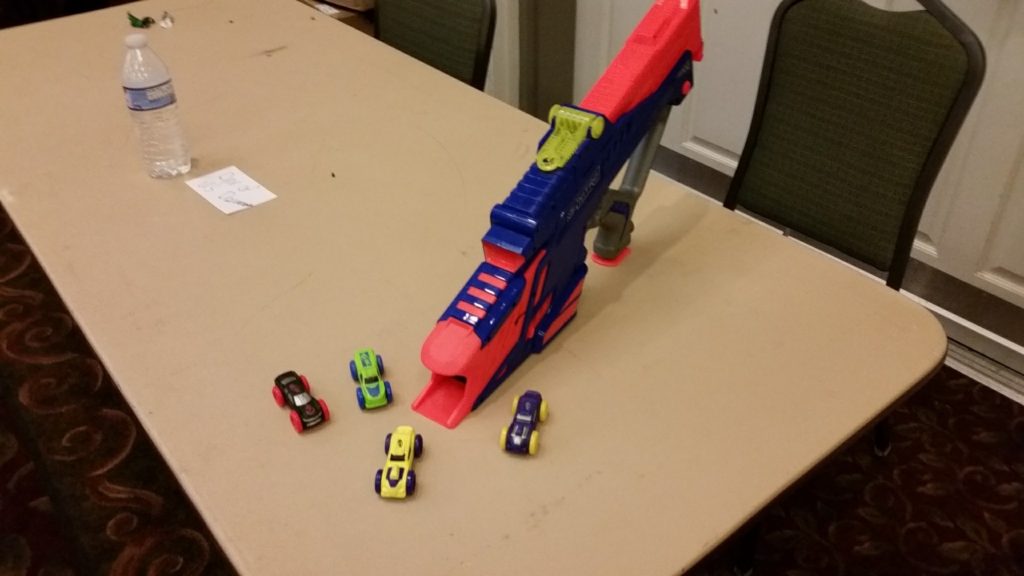 Eventually, I was able to recover all of the cars and the associated obstacles. But it was clear at that point that both kids and adults were enjoying this thing. Many of us naturally wondered how we could make it launch the cars farther. In reality, it’s not an item that needs to be improved. You can just grab it, load up the magazine with vehicular projectiles, and fire away your boredom or frustration.

We’ll still look at the inside, don’t worry.

The launcher itself has a Nerf blaster feel to it, complete with a flip-up sight. In addition, it functions the same as Nerf semi-auto flywheel blasters. In this case, the rev trigger is a plate on the bottom of the grip. It’s supposed to activate when pressed down on a surface, although nothing is stopping the user from depressing it manually. The main trigger releases a car from the magazine, which holds nine cars total. Finally, the magazine is removable, allowing for easy reloading. It’s that simple.

The cars themselves are composed of a plastic base with large wheels attached. The entire body, however, is made of a thick piece of dense foam. It’s a good solution for an object that will inevitably crash into things.

In addition to the nine cars, the blaster also comes with two ramps (shallow and steep) and various plastic obstacles like miniature boxes, barrels, and tires. So whether you’re attempting stunts, jumping into the bathtub, or just sending pieces flying, there’s plenty of things to try.

Looking Under the Hood

For those interested in how the Motofury works, the operation is fairly simple. The rev trigger/safety completes the circuit to the single motor and flywheel. Pulling the trigger releases the next car in the magazine down the ramp. The flywheel then propels the car forward to its destination.

As far as I know, I’m the only person to have actually modified my Motofury. I replaced the motor with a Meishel 2.0, added a Blasterparts flywheel after accidentally damaging the original, and replaced the battery tray with a Deans connector for Lipo usage. The Motofury is somewhat louder, but also more powerful, to the point where ramps have to be taped down. It’s entirely unnecessary, but I do such things because I can.

The Motofury Rapid Rally is the largest Nitro product, clocking in at $50 at most retailers. For that price, you get a mag-fed car launcher and all the materials needed for hours of jumping, skidding, crashing, and flipping. Hasbro has a serious competitor with Hot Wheels here, and you only have to launch one car to see why.