The Double Drum, better known as the Barbarian, formerly Blizzard, is another new Buzz Bee blaster based on an older design. It is a pump-to-fire blaster fed from two large cylinders, very similar to the older Buzz Bee Sidewinder. Given I was pleasantly surprised by the latter blaster, I held some hope that this blaster would be decent, despite its pump-to-fire nature. 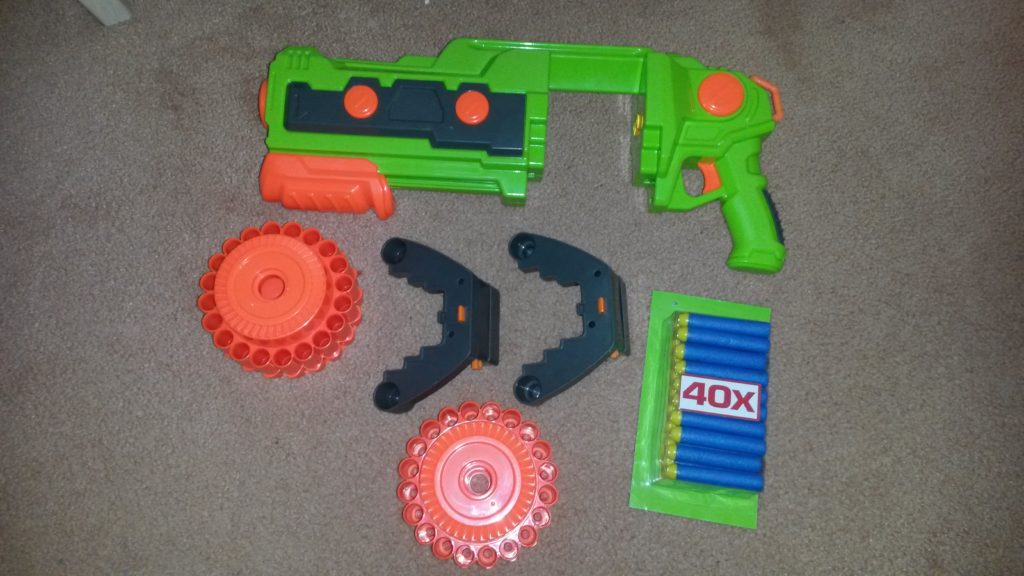 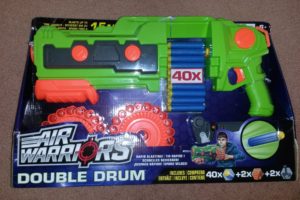 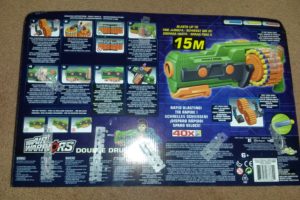 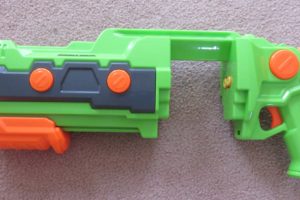 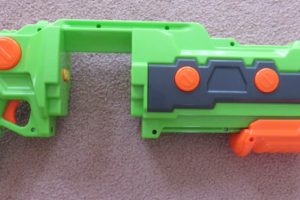 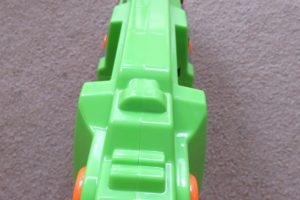 The Double Drum is an odd, chunky blaster. It is tall and wide, yet is not particularly long. With no cylinders loaded, it has an unsightly and awkward gap in the middle, though of course when in use this gap is not an issue. It sports a single sling point at the back of the blaster. 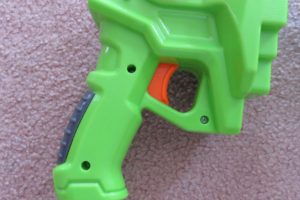 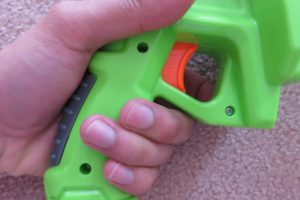 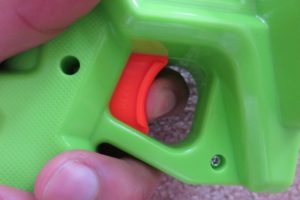 Close up of the faux trigger.

The Double Drum’s handle is not particularly well designed. It is not very long, and the angled protrusion at the bottom reduces its effectively length significantly. When I hold the handle, I find my fingers to be squished tightly together between the trigger guard and the bottom protrusion, which is particularly uncomfortable.

The Double Drum also has a faux trigger. It doesn’t move and serves no purpose besides aesthetics. I find it to be a little too thin, which can make it a little uncomfortable to press against. 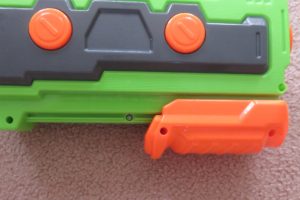 Close up of the pump grip and track. 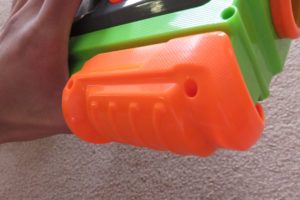 Another angle of the pump grip. 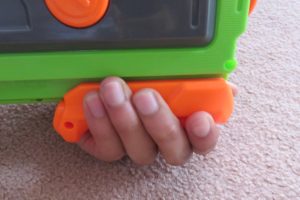 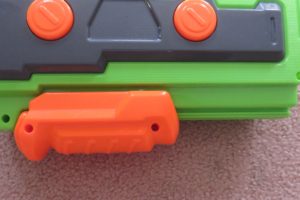 Pump grip all the way back.

The Double Drum is operated purely by its underbarrel pump grip. It is quite well designed, being of a good width and reasonable length. I find it quite comfortable to hold. Unfortunately, the grip design is not ideal for a pump-to-fire blaster. While I am not a big fan of vertical grips, I find them more comfortable for pump-to-fire blasters than a flat pump grip. nevertheless, the Double Drum’s pump grip is far from the worst grip I’ve held. 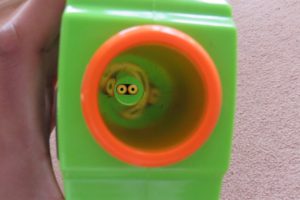 Looking down the faux barrel.

Close up of the cylinder advancing mech. 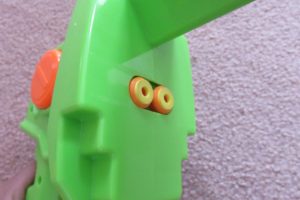 Close up of the plunger outlets. 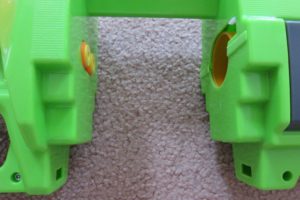 Overall look at the cylinder gap.

The Double Drum uses two air outlets to fire from both of its cylinders without a more complex cylinder switching mechanism. By design, when one outlet is active and lined up with a barrel, the other is completely blocked off by the other cylinder. The overall air seal in the system is quite good, so there is a minimum of air leakage.

The cylinders are advanced by a small arm that extends on the forward stroke of every pump. This small arm sits just next to the rear entrance of the faux barrel. 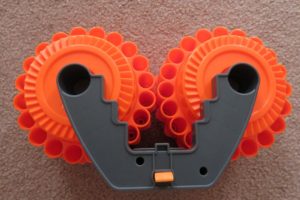 Front of the cylinder assembly. 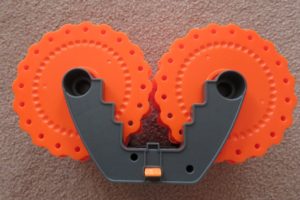 Back of the assembly. 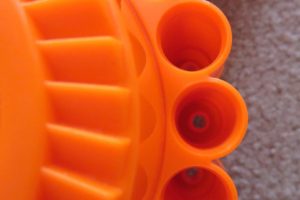 Close up of the barrels.

The Double Drum’s cylinder assembly consists of two 20 dart cylinders, for a total capacity of 40 darts. These cylinders mesh together like gears, such that turning one will also turn the other. This makes turning them for reloading a lot more convenient, and allows the cylinder advancing mech to be a lot simpler.

Like the older Sidewinder, the Double Drum’s barrels use a cone-like protrusion to keep darts in the barrels. They are very tight on the back of darts. While this keeps darts in place very reliably, it also makes reloading a lot more difficult, especially if the darts are worn and squishy. 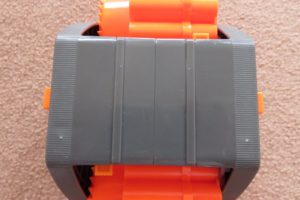 Close up of the bottom of the assembly. 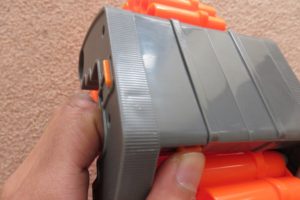 Holding down one of the cylinder releases. 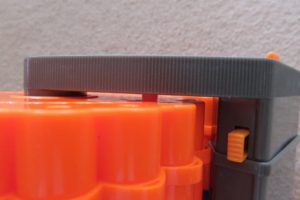 Looking at the locking nub.

The cylinders are held securely in place and rotate to set positions, as controlled by a small spring loaded locking nub. This ensures that the cylinders are always lined up correctly with the air outlets on the blaster. Besides this, the cylinders are free to rotate, and can be easily rotated by hand. 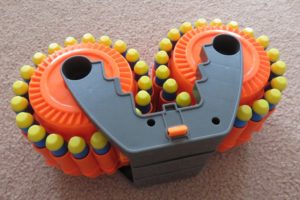 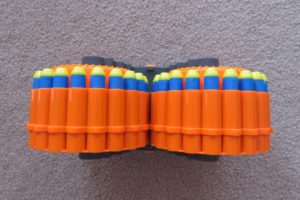 Top down view of the loaded cylinders. 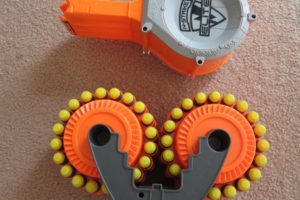 The cylinder assembly, while intended for quick removal and replacement, is a very large and bulky piece. It is far beyond the size of more conventional quick-reload items like clips and magazines, which hurts its viability quite a bit. 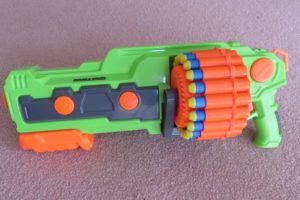 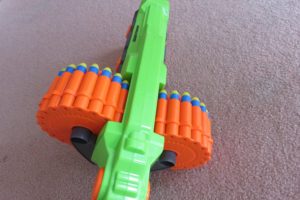 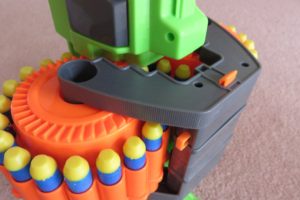 Close up of the cylinder assembly locking with the blaster.

Fully assembled, the Double Drum is quite bulky, in particular being far wider than most other blasters due to its cylinders. Compared to the older Sidewinder, it is much better balanced due to being shorter, and having its weight evenly distributed. That said, it is still quite front heavy and could have benefitted from a stock, both for weight and for stability.

The cylinder block locks into place by lining up with the inside edges of the blaster’s central gap. It locks securely in place with the two orange locking mechanisms simply keeping the cylinders from dropping out. 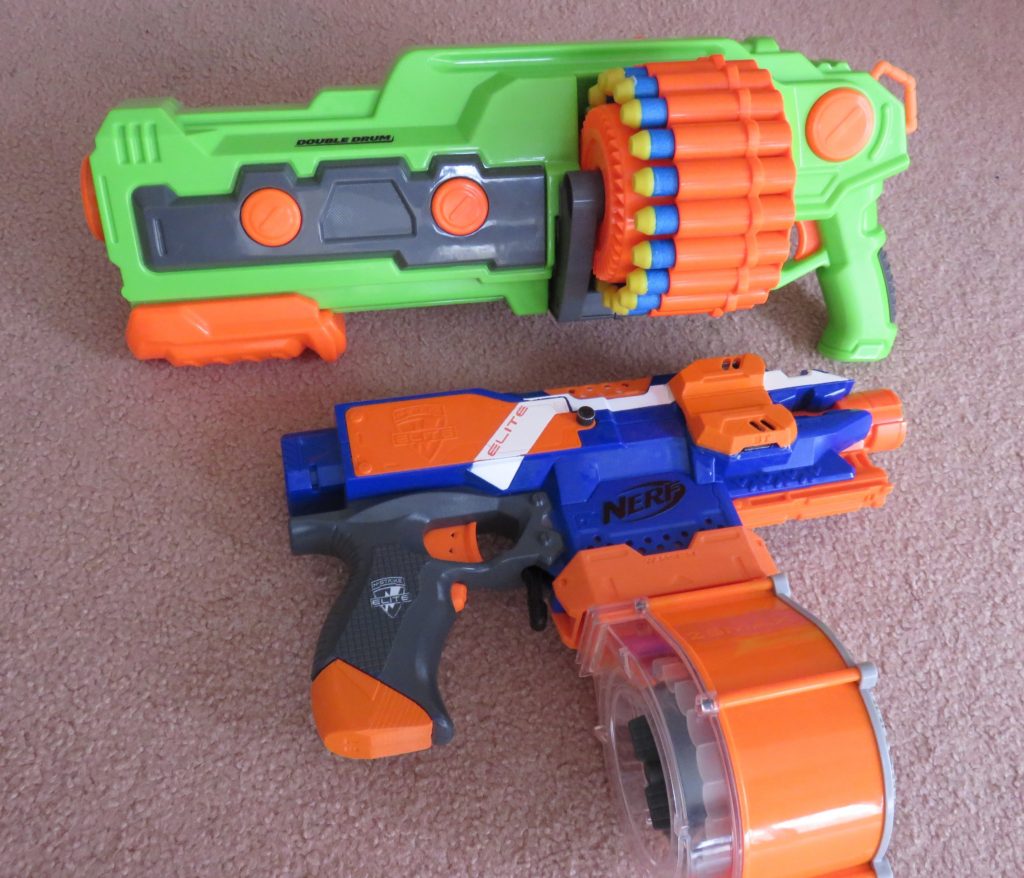 Next to a Stryfe.

The Double Drum is not a particularly long blaster, but it is quite tall and very wide.  Compared to a Stryfe, it is actually not much bigger aside from width.

As a pump-to-fire blaster, it is difficult to measure the Double Drum’s muzzle velocity with the chronograph I currently own. Furthermore, range measurements are somewhat inaccurate given the jerky nature of the blaster. My best attempt at level, flat shots with the included Long Distance darts resulted in ranges of around 12 – 17 metres.

Accuracy is essentially non-existent. On top of being a very jerky blaster to use, Long Distance darts are also very inconsistent and inaccurate. The overall result is a blaster that may not be able to hit its target once even with its full capacity.

The Double Drum functions best in stock games as a high capacity, magless scavenger blaster. The majority of its barrels are exposed, and its cylinders can be turned by hand at will. It sports one of the highest capacities of any single blaster, offering it a significant advantage in protracted skirmishes. It can also be used to deliver a significant wall of foam, though this can get physically taxing very quickly.

The Double Drum’s main disadvantage in this role is its cone like protrusions in each barrel. These protrusions keep darts in the barrels, but as a result also make loading darts much more difficult, particularly if the darts are worn out and more flexible. The blaster is also extremely inaccurate so will likely expend much more ammunition than most other blasters.

Although the Double Drum features easily switchable cylinder assemblies, there is currently no source of them outside of buying more blasters. Furthermore, while they are much easier to switch than those of the older Sidewinder, they are still far bulkier and less convenient than more conventional clips or magazines.

The Buzz Bee Barbarian, and the Walmart-exclusive Adventure Force Decimator (which is another reshell/recolour) are available for around 20-27USD. While this compares quite favourably to most Nerf blasters in this price range, there are multiple other competitors to consider. In particular, both the Dart Zone Magnum Superdrum and X-Shot Turbo Advance retail in the same price range, both sport the same 40 dart capacity, and most importantly, both have triggers. The Magnum Superdrum in particular was hailed by many as the best blaster of 2016, and the Turbo Advance is shaping up to be quite a good blaster as well. Compared to those two, the Double Drum has few, if any, advantages. As a result, I cannot give the Double Drum my recommendation.