When news leaked that Prime Time Toys (home of the Dart Zone brand) was expanding their Rival-type product line, I was excited. The Powerball had only been out half a year, but had already proven great performance for a good price. Officially released today was not only a revamped springer, but a Zeus/Hera competitor known as the Accelerator. Available at Walmart for $28, it’s not the perfect blaster, but there are still plenty of good things to find. 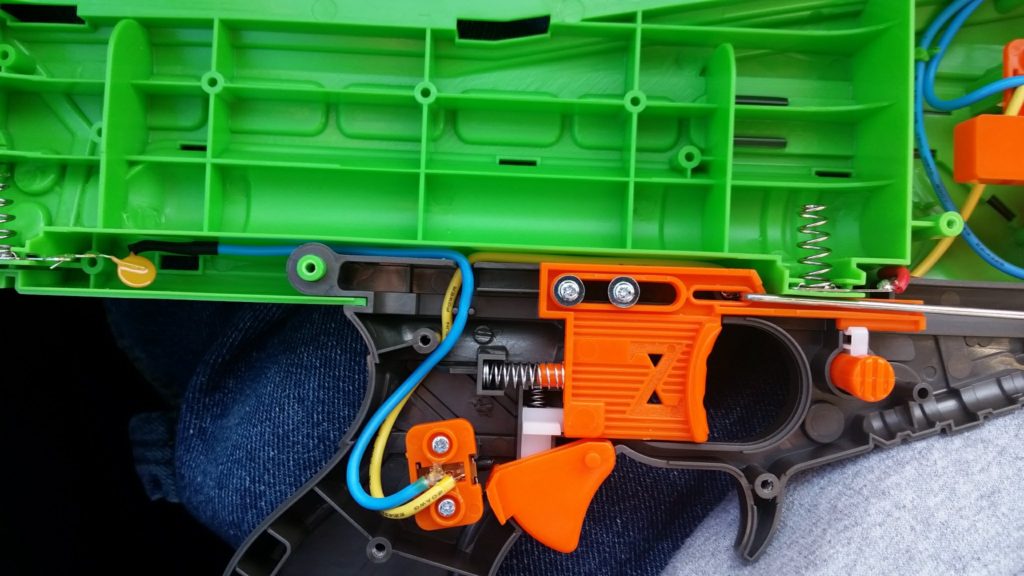 The Accelerator is an electric, semi-auto blaster powered by six D batteries. In one of many nods to cross-compatibility, Prime Time Toys used a similar battery tray to current Rival offerings. This allows the Nerf Rival Rechargeable Battery to be used.

The Accelerator is fed by a 25-ball hopper, which loads via a door flap at the top. The hopper is removable, and can be replaced with the 8-ball hopper from the spring-powered blasters. In addition, Rival magazines can be used. 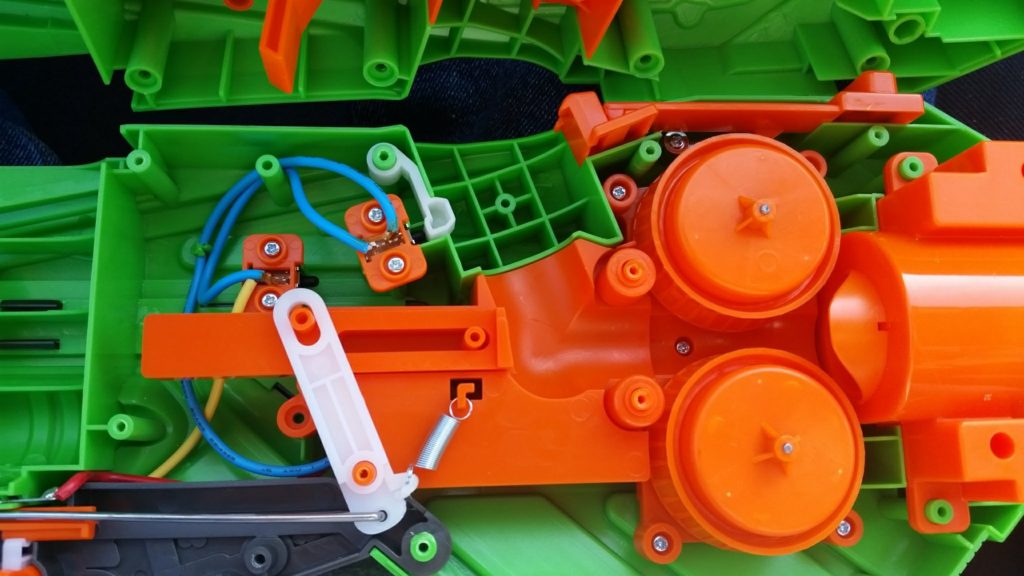 Underneath the shell, the Accelerator has Rival-type flywheels and motors, as well as safety switches connected to a loaded hopper and a closed jam door. A simple lever-pusher mechanism is used to push the balls into the flywheel cage. Yes, it is literally a Rival Stryfe.

Hop up is provided by a plastic ridge inside the barrel, instead of a flexible rubber flap.

The shell itself is solid with plenty of textures, and the build quality is on par with Nerf. The side plates can be switched with included red and blue plates, for your preferred team colors. A nice thought, at least.

I was able to find the Accelerator in-store Sunday, just prior to an indoor war in Cincinnati. Using a partially drained Rival rechargeable battery, I still managed to do well.

Among the things I noticed:

Overall, however, the Accelerator held its own, especially considering the superstock nature of the war. It works great with a dump pouch full of balls for feeding between skirmishes. The cross-compatibility is hit-or-miss, as demonstrated by the mag issue, but the battery tray and ability to use virtually any Rival-type ammo are both good touches.

Separately from the actual blaster quality (good) is what we can do with it. There are no boards to desolder from the motors, and the circuit itself is very simple.I would expect this blaster to perform as well as any other Rival motorized blaster with heavier wiring and a 3S lithium polymer battery.

In addition, the simple trigger mechanism lends itself to the possibility of a motorized adaptation. It would not surprise me to see full-auto kits made for this blaster. Whether the motors can keep up with full-auto fire is, of course, another matter.

If you want to use Rival mags, you NEED a stronger return spring on the pusher.

Finally, the hopper at the top could be expanded to hold more ammo. Conversely, it would be extremely easy to make some sort of adapter for a continuous feed mechanism, a la the HIRricane modded Zeus.

After rewiring an Accelerator and adding a connector for a 3S battery, my Accelerator averages 120fps, with the motors revving up extremely quickly after each shot. In addition, I replaced the extension spring attached to the white lever arm on the pusher. With a stronger spring, Rival magazines are now usable; the pusher can retract against the force applied by the magazine spring. Finally, the noise is less than that from Nerf Rival blasters similarly modified. Time will tell how well the motors hold up to the extra power.