Today’s the day for the official press release! The official images and descriptions are below, along with my thoughts. 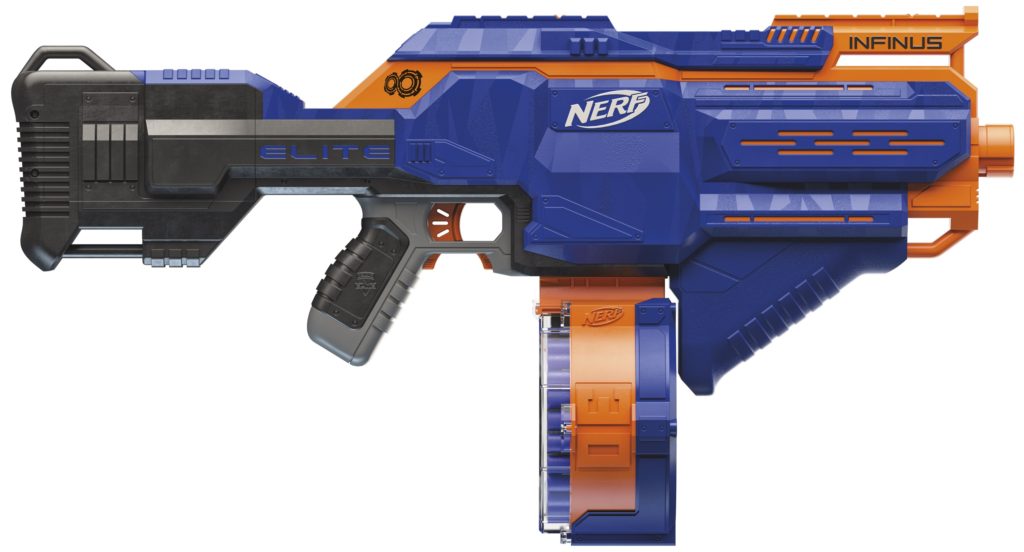 Load and fire fast with the NERF N-STRIKE ELITE INFINUS blaster! The INFINUS blaster features motorized Quick-Load Technology; as kids feed darts into the blaster, the darts are automatically loaded into the 30-dart removable drum. With motorized, rapid-fire blasting, kids can quickly unleash a barrage of darts on their targets. Hold down the acceleration button to power up the blaster, then pull the trigger to fire. The INFINUS blaster includes 30 Elite darts. Requires 4 D batteries, not included. Available at most major toy retailers nationwide and on HasbroToyShop.com.

Introducing Nerf’s first ever MEGA ACCUSTRIKE blaster! Blast with power and precision with the NERF MEGA THUNDERHAWK blaster. The barrel extension slides back and forth on the top of the blaster for custom performance allowing for distance targeting or a more compact blaster. The THUNDERHAWK allows for steady shots with the flip-down bipod for MEGA performance with ACCUSTRIKE accuracy. The THUNDERHAWK blaster includes a 10-dart, side-loading indexing clip and 10 NERF MEGA ACCUSTRIKE darts. Also compatible with NERF MEGA darts. Available at most major toy retailers nationwide and on HasbroToyShop.com.

Thoughts on the Blasters

Firstly, the price on the Infinus is better than expected. It’s still a pretty penny, but if something is going to be a flagship blaster for the second half of the year, it has to be relatively affordable. The tinkerer in me naturally wants to open one up to see exactly how it works. It’s also good that the drum itself is removable. I’m assuming the drum has a special reason for existing, as opposed to just including a 25-round drum like you’d see with the Rhinofire or Hyperfire. Perhaps you need a special drum for the ammo reloading tech to work? There are still plenty of questions to ask here.

As for the Thunderhawk, the most notable thing to me is the making of MEGA Accustrike darts. Stock MEGA darts are notoriously inaccurate, and while I personally loved the Buzz Bee XL darts, they’re no longer made. So a Nerf-brand solution to the inaccuracy is very welcome. No word as to dart prices, however. And we know regular Accustrikes retail for far more than Elites. A ten dart clip (a la the Battlescout) is nice for capacity.

Admittedly, the inclusion of a giant extendable barrel extension is funny to me. Kids will probably love having it, though.

Sadly, I won’t be making it to Toy Fair this year, but I’m sure you’ll see a nice scoop on Lord Drac’s Youtube channel when February rolls around!