As expected, this time of year is full of new product announcements, spread out among various media outlets, followed by general press releases. Today, Popular Mechanics showed off the newest blasters in the Rival Phantom Corps line. I’ll list the official press releases, and the my thoughts. 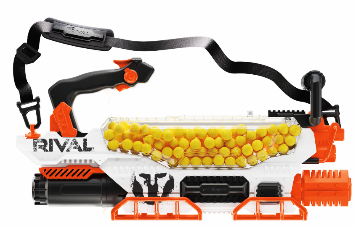 Head into battle blazing to take on the competition with the NERF RIVAL PROMETHEUS MXVIII-20K blaster! This blaster features the new ADVANCED ACCELERATION SYSTEM which allows it to fire at a rate of 8 high-impact rounds per second! This blaster also holds a whopping 200 high-impact rounds in its easy-load hopper. The PROMETHEUS MXVIII-20K blaster is fully motorized with a rechargeable NiMh battery for endless fun. Package includes blaster, 200 high-impact rounds, rechargeable NiMh battery, charger, two flags, shoulder strap and instructions. Available at most major toy retailers nationwide and on HasbroToyShop.com. 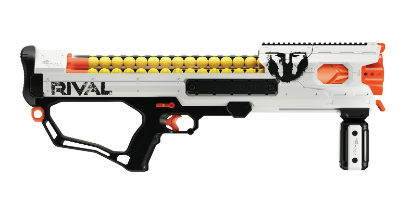 Experience intense head-to-head competition with the NERF RIVAL HADES XVIII-6000 blaster! Load 60 high-impact rounds into the easy-load integrated magazine, prime, and pull the trigger to fire a barrage at your enemies. Whether Team Red, Team Blue, or Phantom Corps, Rival battles will never be the same. Package includes blaster, 60 high-impact rounds, two flags and instructions. Available at most major toy retailers nationwide and on HasbroToyShop.com.

The Prometheus is simply going to be a large blaster, there’s no way around it. 200 balls, using a minigun-style handle and sling? Having a rechargeable battery by default is at least a nice consideration, both for weight and the expense of using alkaline batteries. I still think there’s a bit of Hasbro biting off more than it can chew, though. The Nemesis started off at $100, then dropped down a nice percentage as Christmas approached (with some stores even doing half off sales). A $200 blaster takes up a lot of shelf space, and needs to move a lot of inventory to justify its continued existence. Will it be fun to use? Of course it will. But for what it is, I could easily imagine needing a price reduction before sales take off.

On a side note, I imagine most people in the modding community will, aside from tearing one apart for learning things, will stick with a Nemesis and just expand the hoppers.

The Hades, meanwhile, is simply an Artemis with double the capacity. (Reminds me of a certain video from Out of Darts) The Artemis is a great handheld blaster with capacity and range, and having a “full” blaster with stock and more balls in storage will be nice. I’m personally more excited for the Hades.

Stay tuned; I’m sure more blaster news will be dropping in the coming days!