The new year has brought with it not just bone-chilling temperatures, but a cool new refresh to the Nerf blaster line. Since the Mediator is being released in three separate pieces, we’ll do the same for our review.

The barrel attachment serves as a additional shotgun blast for whatever blaster you mount it to. It works. Whether you buy it is just a matter of play style. 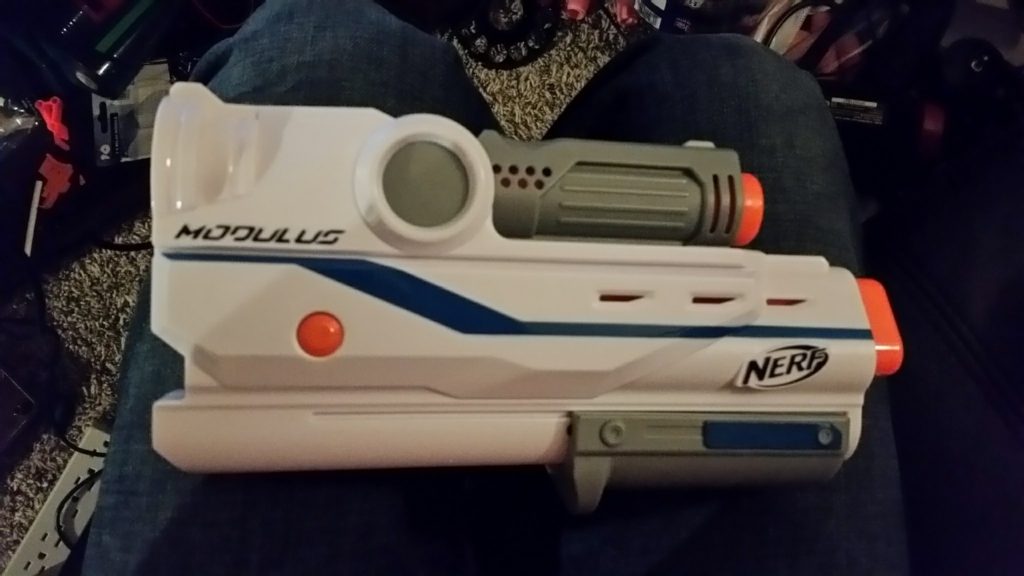 The last major Modulus release, the TriStrike, had a Mega shotgun attachment included. In a bid to (perhaps) sell attachments without the core blaster, Hasbro is selling the new shotgun barrel for $15.

The barrel attachment maintains the Mediator paint scheme, at least on the relevant side of the shell. The extended dart barrel can swing down and serve as a standalone handle, should the user desire a shotgun pistol. Why a person would do this is questionable, though, since you could just use an actual blaster.

The pump grip is used to pump up the air tank inside. The orange button, meanwhile, is the trigger. This attachment does, in fact, feature a piston valve tank (like a Hornet or XBZ tank). Technically, it features three.

How Does This Work? 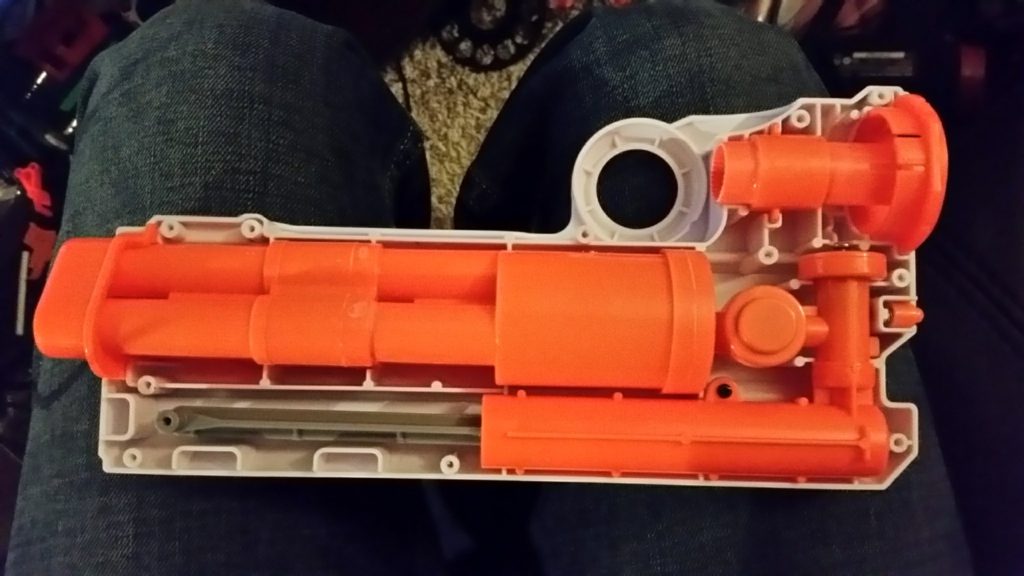 Let’s look at the inside. The air pump feeds up into a fairly large but manageable pilot volume. The over-pressure relief valve sits under the barrel attachment area, and the trigger valve sits in front of that. The main tank, and the barrels, sit at the front.

On closer inspection, however, many things don’t make sense. The darts sit at the very front, with the safety valves (“air restrictors”) taking up a little space behind them. So why the three prongs? 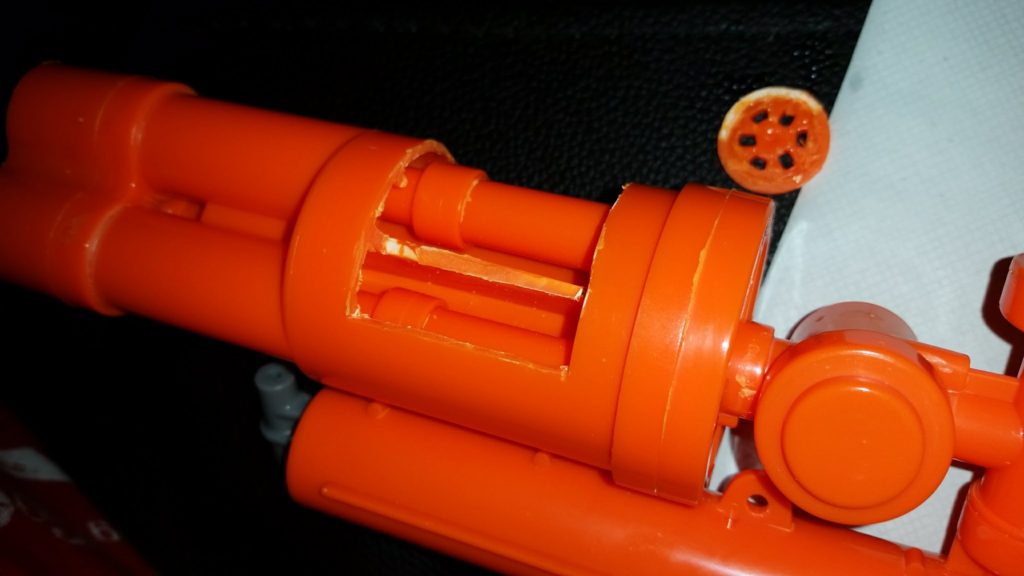 It turns out the tank (singular) is actually tanks (plural). The main part is physically molded into three equal parts (think of the Mercedes-Benz logo – that’s the cross section). Contained in each is a rather large tube, with the piston sealing at the end, just underneath the air restrictor. It’s an interesting approach to the shotgun method of dart delivery, ensuring that all (loaded) barrels receive the same amount of power. Since all the tanks are connected to the rear pilot volume, they all trigger at the same time. 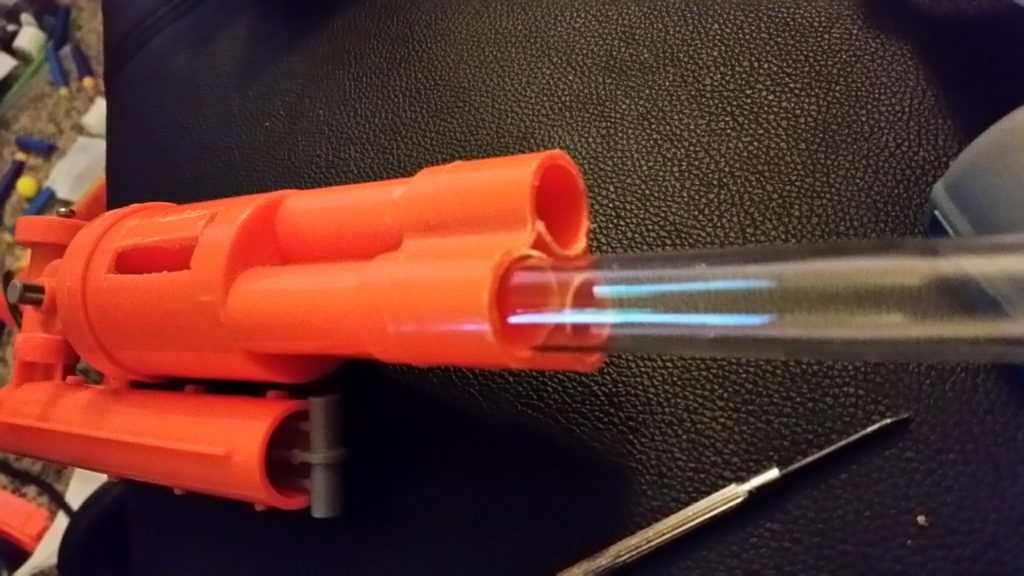 For people interested in modifying the tank, however, it might end up being a disappointment. I will be doing experiments on my own, but those internal tubes take up LOTS of space that could have otherwise helped fire darts. In terms of maximizing firing volume, Hasbro has gone the route of, well, Nerfing the air tanks. Granted, it may have been easier to mold everything this way so that it works as intended. The final product just annoys the tinkerer in me.

It should be noted that the chambers in front of the piston seals, where the safety valves normally sit, will friction fit PETG tubing from McMaster.

The stock barrel attachment fires all three darts with extreme consistency, perhaps too much. You can easily hit 20′-30′ flat ranges, with more distance at an angle. However, the spread depends highly on your chosen dart. The included Elite darts? Those have plenty of spread. Loading Accustrike darts? Expect a very tight grouping that’s really no better than firing a single dart from the main blaster.

For what it is, the Mediator Barrel works well. Groups of darts can be very effective if you or the target is moving, and if you’re at close range. Or, perhaps, you’re reloading but need to defend yourself. It’s a neat barrel attachment, and selling it by itself is a nice move on Hasbro’s part. Ultimately, however, it just depends on your play style.