The new year has brought with it not just bone-chilling temperatures, but a cool new refresh to the Nerf blaster line. Since the Mediator is being released in three separate pieces, we’ll do the same for our review.

The Core blaster amounts to a pistol Rampage. Which isn’t necessarily a bad thing. 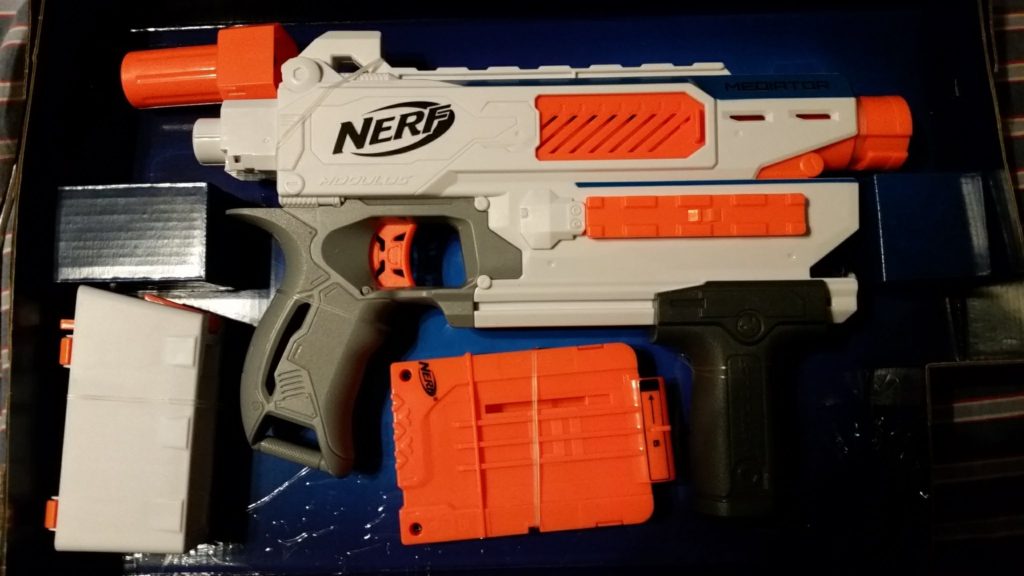 When my Mediator arrived back in December, it had a unique issue. The end cap for the stock attachment point wasn’t screwed in, nor were there screws. I haven’t heard of such a thing happening to anyone; just a weird occurrence.

As with most Nerf offerings these days, all the special paint jobs are only on one side. The other side is almost all white, with the various warnings molded into the shell. It’s also where the magazine slot clips into place.

In hand, the shell is quite comfortable. With a large handle and pump grip, the Modulus is the right size for both adult hands and smaller ones. 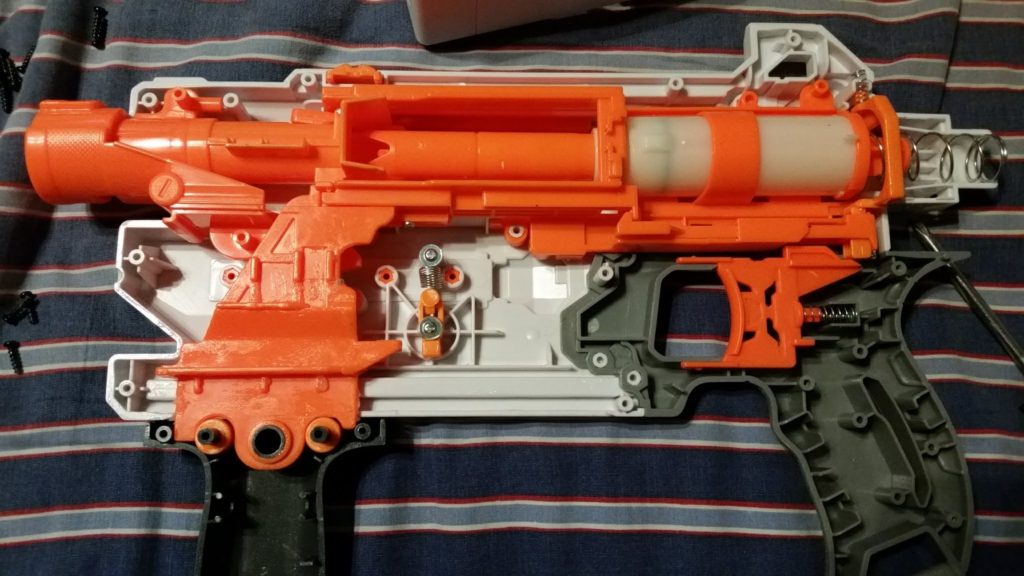 The innards are exactly what you’d expect. The Mediator is just a Rampage with the priming handle beneath it, instead of at the front.

All the necessary bits are there for slamfire, of course, and it works well.

You’ll notice there’s a sort of ratchet sitting in line with the priming handle. This type of mechanism has been used before in the Dreadbolt. It simply serves to force the user to complete the full motion, forward or back, of the priming handle. It does make more noise than normal springer-type blasters as a result, but that’s more of a minor annoyance.

How Does It Shoot?

The Mediator performs as you’d expect from modern Elite blasters. Mine averaged 71fps over several hundred shots, using Elite darts. Your performance will vary with other dart types.

In war use by itself, the Mediator excels in “run and gun” types of play. As a compact pump-action, mag-fed blaster, the Mediator is easy to use, aim, and hit targets with. You don’t NEED the stock or barrel kits, but they serve their purposes should you choose to pick them up.

As of this posting, I have yet to experience any jams with the Mediator.

Users with large hands will enjoy being able to easily remove and load magazines by simply wrapping the left hand around the magazine and pressing the button with their thumb while pulling.

The Modulus Mediator isn’t a blaster we haven’t seen before, at least mechanically. But it does come in a compact size and for only $20. In addition, It performs its job well. Spring-based blaster fans should be happy with this one.