January 1st, 2018 brings with it many new blasters in the Nerf lineup, although there are always some blasters that pop up early. Seeing as there hasn’t been much focus on it, I thought I’d share a review of an arrow-launching blaster, the Zombie Strike Wrathbolt. For $15, it’s quite the performer – assuming you actually use arrows.

There is already a Zombie Strike Dreadbolt on the market, but for a steep price. While the lever-action prime is handy and increases the rate of fire, you’re ultimately shelling out lots of money for a giant (albeit comfortable) piece of plastic.

The Wrathbolt does away with all the unnecessary plastic, though not the “cobbled together” design. A faux hacksaw serves as the lower part of the shell, and several wrenches compose the bow. There are two mechanical safeties present. The first safety prevents loading unless the elastic cord is drawn. The second, which is linked to the “loaded” indicator on top, prevents firing without the arrow in place. 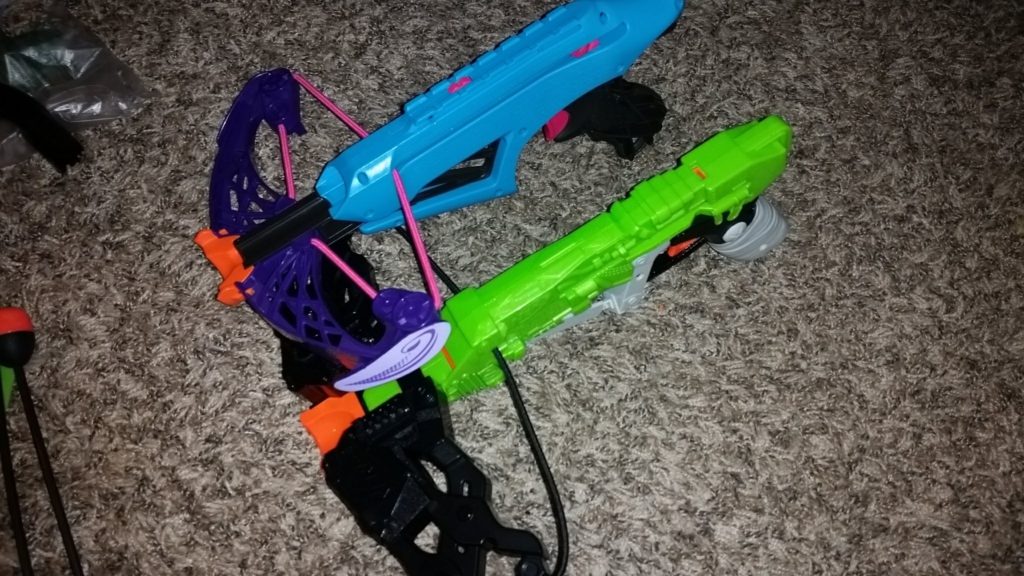 (Yes, I realize crossbows use bolts. But these were all Rebelle arrows originally, and that part has just carried on. Get over it.)

In size and layout, the Wrathbolt is virtually identical to the Rebelle Secrets & Spies Courage Crossbow. However, the Wrathbolt’s cord has zero tension at rest, and the handle (while sized the same) is more comfortable thanks to not having the skeletonized design. 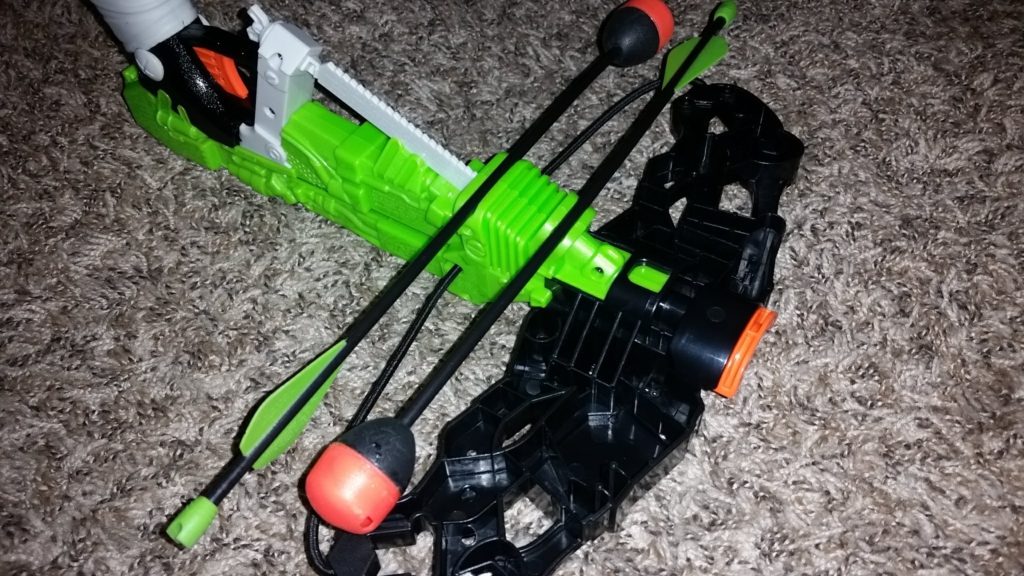 I was pretty surprised after spending a few hours testing the Wrathbolt. It was easy to prime, easy to load, and (vitally) easy to load correctly. It simply wasn’t hard to put the arrows in the track, latch the back of them over the cord and safety, and get the priming indicator to show. That in itself is a vast improvement over previous crossbows.

Ranges were also much better than expected. None are advertised on the box (a trend with many of the oddball Zombie Strike blasters), but the Wrathbolt consistently fired arrows where you pointed them. Nerf arrows can be hard to register on chronographs due to the odd size, but angled ranges averaged about 70′, with very little deviation. Note, however, that the performace was with arrows in good condition. Arrows with bent shafts will perform worse.

Fifteen dollars for a small arrow-firing blaster that works well is well worth it. There is the obvious hurdle of using a different ammo type than darts that will prevent some adoption. You simply don’t see many oversized ammo types at Nerf wars or HvZ games, unless a mechanism for use exists (shield busting, special zombies, etc). But for the price and performance, the Wrathbolt is hard to beat, and it clearly makes the Dreadbolt a harder sell in the future.