The last of our trio of pressurized water blaster reviews focuses on a Buzz Bee Toys-produced blaster. The Power Raider features a large reservoir, separate pressure chamber, and a red dot sight that fits recent Buzz Bee blaster rails. However, there’s a flaw that keeps the Power Raider from achieving greatness, unless you feel like opening it up and correcting it. 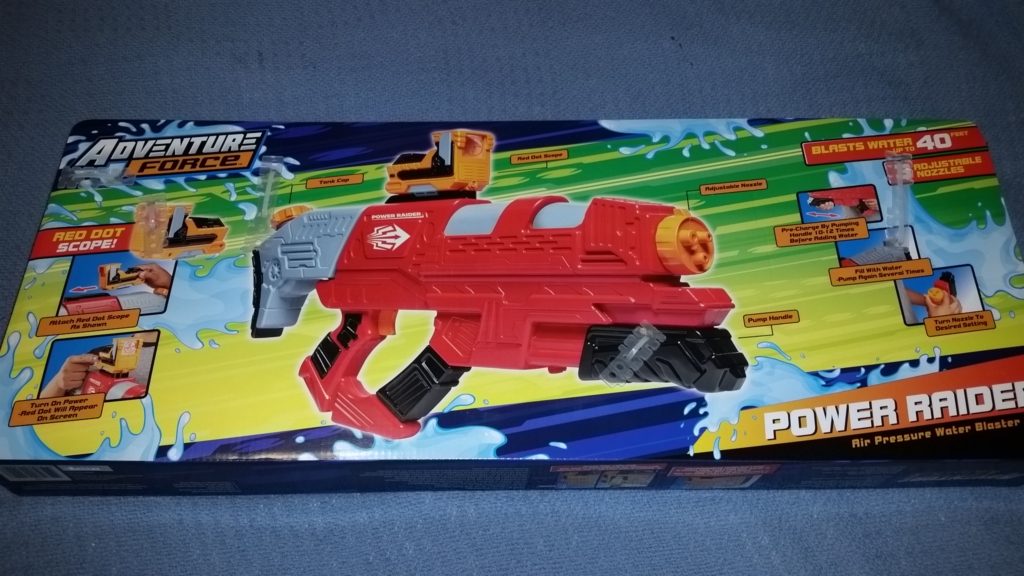 The Power Raider isn’t the most beautiful blaster on the block, but it’s the result of a no-nonsense approach to its design. It has a solid shell with stiff plastic, and feels like any other Buzz Bee blaster you’d find, firing water or darts. The boxy design allows for a large reservoir, holding 1800mL of water. The front grey area, meanwhile, is a separate pressure chamber that is around 125mL in total volume, but realistically takes around 90mL of water. This is hard to determine, however, for reasons I’ll soon get into. 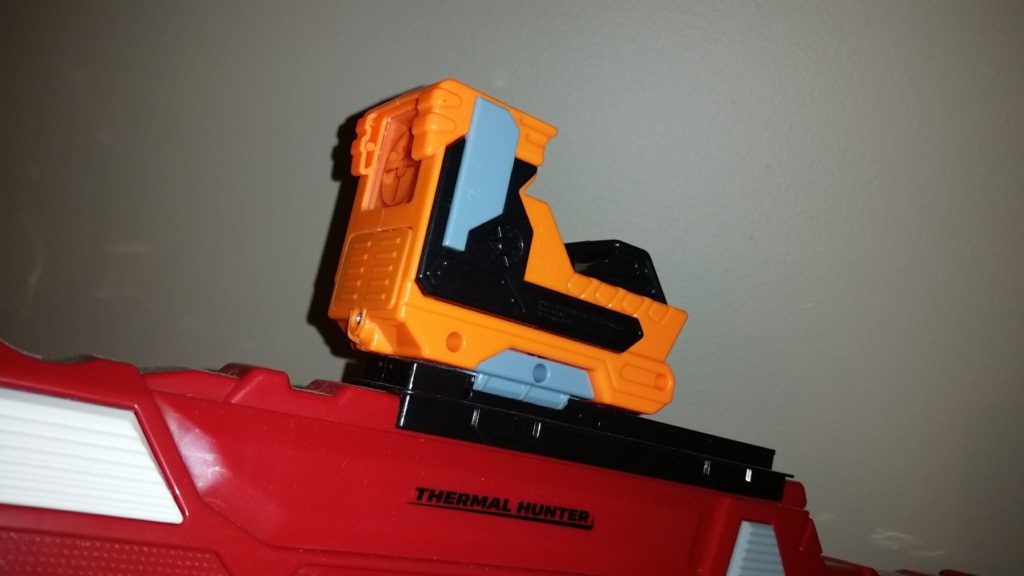 The Power Raider, as a bonus, comes with a red dot sight (seen as a standalone item at this year’s Toy Fair). If you look at the top of the blaster, you’ll see a tactical rail. This is the same type of rail as seen on recent Buzz Bee dart blasters, including the Thermal Hunter and the Monorail. It takes two AA batteries, and due to the design has to be held up at an angle for the light to line up properly. A nice touch, considering water and darts obviously follow projectile motion. It’s rather large, but endearing in its cartoon-like appearance.

Overall, the Power Raider is solid, sturdy, and comfortable to use. 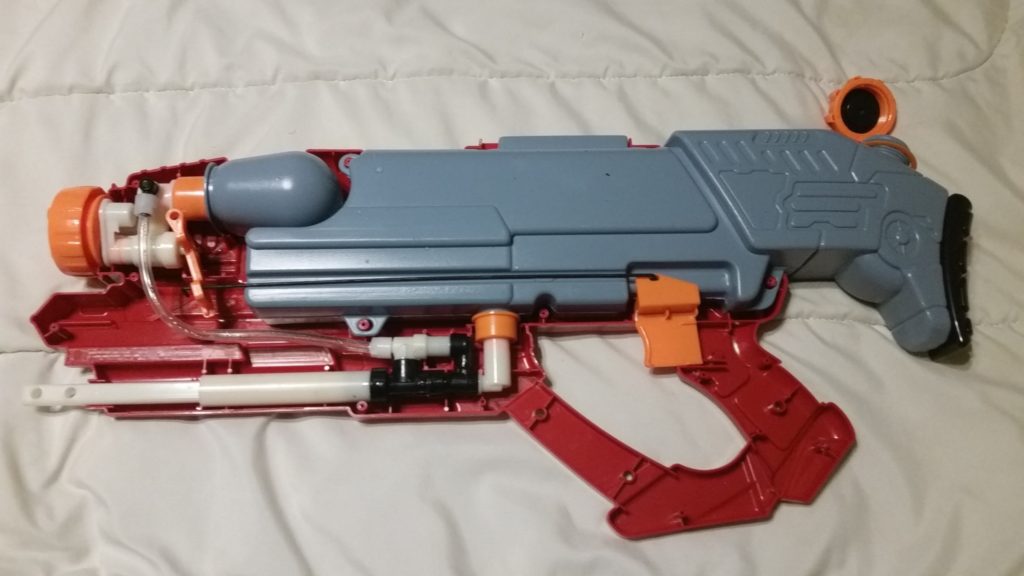 It’s in use, however, where the Power Raider’s flaws become apparent. The reservoir drains through a flat bottom (in the middle, as well), which makes draining the reservoir a chore if you aren’t holding it level. Most blasters have a low spot to drain from, and often have a hose to feed from there.

On the topic of hoses, the hose within the pressure chamber is stiff enough that it sticks essentially straight back in stock form. This is ok, if you’re firing vertically. In regular use, however, it means that after the initial pumping of the blaster, you only expel so much water before getting a mist shot. You end up leaving the bottom of the chamber filled with water, and effectively reduce your chamber volume by a substantial amount. Instead of 6-7 pumps to fill the tank, 2-3 now triggers the pressure relief valve. Pitiful streams result, with 20′ max distance and little volume expelled. It’s a far cry from the 40′ range claims on the box. 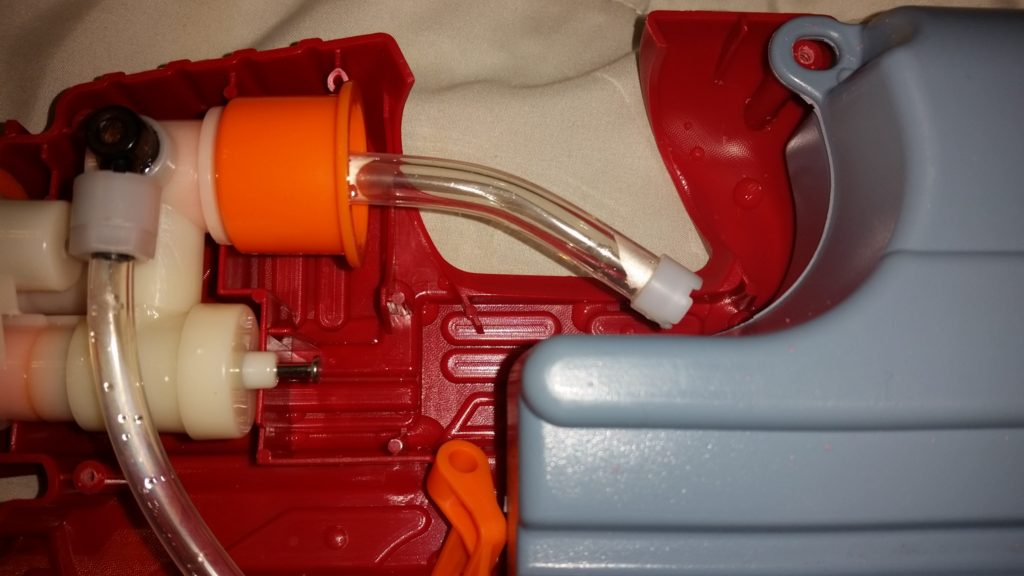 It’s possible that this isn’t an issue for all Power Raiders, but given the stiffness of the tube and it’s short length, I wouldn’t be surprised if many blasters have this issue. Fixing it requires unscrewing the shell AND breaking the solvent welded pump cap and tactical rail. On my blaster, this took quite a while to work loose without damaging the shell.

I used a heat gun to soften the plastic hose in the middle, and bent it down. With the end of the hose in this position, the blaster works spectacularly. Not only could I pump the chamber full every time, I could drain the entire load without any mist shots. Even better was the fact that angled ranges were up to 45′, as opposed to 20′.

The ranges were 40′-45′ for both the thin and thick streams. The third option, a four-stream spray, doesn’t go as far, opting for an area effect.

The Power Raider isn’t the most beautiful blaster, but it has high capacity and is capable of great performance. However, in stock form, it just doesn’t reach its potential. The reservoir draining issues are annoying, but the pressure chamber firing issues are horrible. If you’re ok with opening the blaster to fix it, then by all means buy one. Doing so will make it of the best new blasters of the season. If you don’t want to do all that work, however, other options are available.

The red dot sight is a nice touch, and works with several Buzz Bee dart blasters. I guess that’s a positive?