The biggest toy event is here once again, which means lots of new blaster reveals from Nerf and other popular toy blaster brands. Just like every other year, Hasbro has put on quite a show, with many welcoming surprises. Some of the items displayed at the Toy Fair, that haven’t previously been revealed include the Elite Deltatrooper, Zombiestrike Ripchain, Modulus Ghost Ops Chronobarrel and etc. Continue reading for official images, pricing and descriptions for the upcoming 2018 Fall Nerf Blasters.

Load and fire fast with the NERF N-STRIKE ELITE INFINUS blaster! The INFINUS blaster features motorized Quick-Load Technology; as kids feed darts into the blaster, the darts are automatically loaded into the 30-dart removable drum. With motorized, rapid-fire blasting, kids can quickly unleash a barrage of darts on their targets. Hold down the acceleration button to power up the blaster, then pull the trigger to fire. The INFINUS blaster includes 30 Elite darts. Requires x batteries, not included. Available at most major toy retailers nationwide and on HasbroToyShop.com. 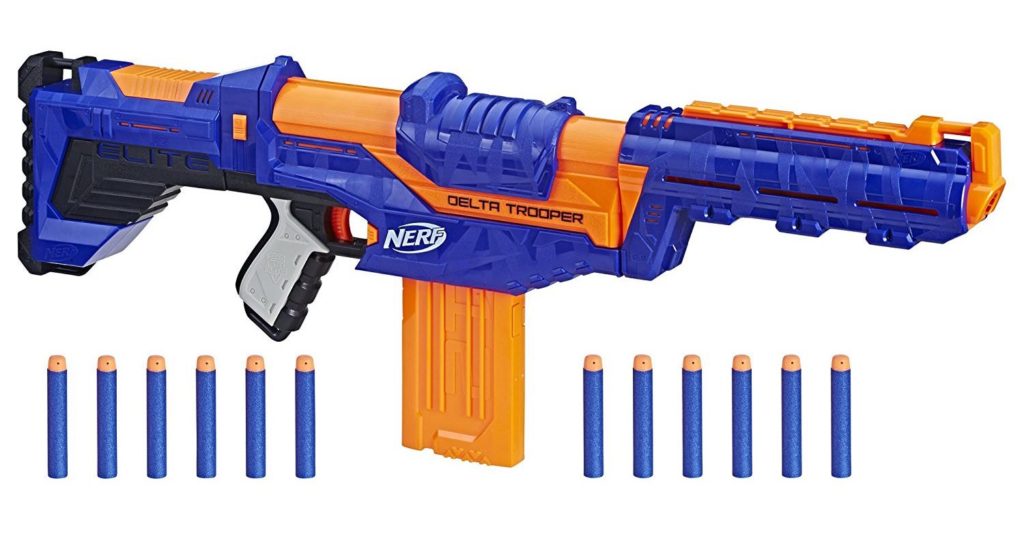 Be prepared for any battle with the NERF N-STRIKE ELITE DELTATROOPER blaster. With four ways to configure, this blaster gives kids epic possibilities with each removable accessory. No matter where the battle takes fans, the DELTATROOPER has you covered. Take along the core blaster when in action, attach the stock to stabilize shots, or attach the barrel extension for distance targeting. The DELTATROOPER blaster comes with a 12-dart clip and 12 ELITE darts allowing kids to unleash a dozen darts in a row. 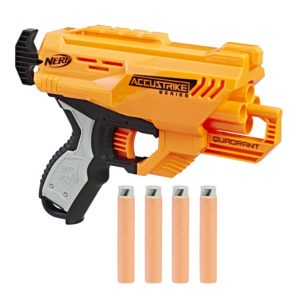 Take on targets with intense accuracy with the NERF N-STRIKE ELITE QUADRANT blaster! This single-shot blaster features a 4-dart rotating drum so players can sweep through the battlefield. Load the darts into the drum, pull the handle back to prime, then pull the trigger to fire one dart. Small and compact, the NERF N-STRIKE ELITE QUADRANT blaster is great for high-intensity, on the move battles. Package includes blaster, four ELITE darts, and instructions.

Introducing Nerf’s first ever MEGA ACCUSTRIKE blaster! Blast with power and precision with the NERF MEGA THUNDERHAWK blaster. The barrel extension slides back and forth on the top of the blaster for custom performance allowing for distance targeting or a more compact blaster. The THUNDERHAWK allows for steady shots with the flip-down bipod for MEGA performance with ACCUSTRIKE accuracy. The THUNDERHAWK blaster includes a 10-dart, side-loading indexing clip and 10 NERF MEGA ACCUSTRIKE darts. Also compatible with NERF MEGA darts.

Stay in stealth mode or light the way with the NERF MODULUS GHOST OPS EVADER blaster! Part of the GHOST OPS series, the MODULUS EVADER is completely clear to keep players undetected on any mission. Illuminate the blaster to guide the way in low-light situations by pressing the light activator. Customize the blaster with the barrel extension which lights up when attached to the blaster. Load the 12-dart clip into the Evader blaster, take aim, and unleash 12 darts in a row with rapid-fire motorized blasting. Enemies will never see you coming! Package includes blaster, clip,  housing cover, barrel extension, 12-dart clip 12 darts, and instructions. Requires 4 “AA” alkaline batteries (demo batteries included).

(Ages 8 years & up/Approx. Retail Price: $99.99/Available: Fall 2018) Upgrade any NERF MODULUS blaster with the NERF MODULUS ULTIMATE CUSTOMIZER pack for the ultimate in Nerf Modulus blaster building and customization! The motorized blaster comes with 7 tactical accessories to prepare for any mission or battle. The NERF MODULUS ULTIMATE CUSTOMIZER pack gives player the power to switch on the tactical light to illuminate targets for practice, power up the blaster’s motor with the acceleration button for rapid-fire dart blasting, focus their aim with the flip-up sight, and so much more. Package includes seven tactical accessories, two 10-dart banana clips, 40 darts, and four missiles.

UPDATE: Although the Modulus Customizer pack wasn’t revealed at the New York Toy Fair, it was shown off at the 2018 Australian Toy Fair.

Screenshot from FamilyGamer TV – No official image at the moment 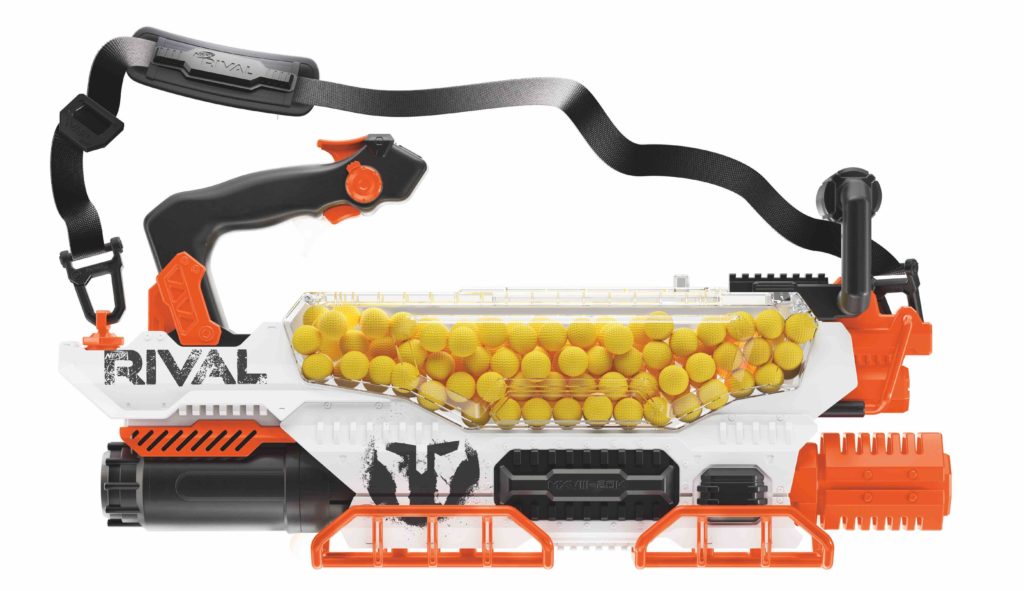 Head into battle blazing to take on the competition with the NERF RIVAL PROMETHEUS MXVIII-20K blaster! This blaster features the new ADVANCED ACCELERATION SYSTEM which allows it to fire at a rate of 8 high-impact rounds per second! This blaster also holds a whopping 200 high-impact rounds in its easy-load hopper. The PROMETHEUS MXVIII-20K blaster is fully motorized with a rechargeable NiMh battery for endless fun. Package includes blaster, 200 high-impact rounds, rechargeable NiMh battery, charger, two flags, shoulder strap and instructions.

Zombie survivors are prepared for anything with the NERF ZOMBIE STRIKE SURVIVAL SYSTEM SCRAVENGER blaster! This essential zombie defense kit keeps battlers ready for any zombifying challenge that comes their way. Load a 12-dart clip into the SCRAVENGER and unleash a dozen darts in a row. Grab the extra clip from the holder and slam-fire the zombies away with the on/off slam-fire button, or stabilize shots with the stock/blaster attachment to never miss a target. The 2-dart back-up blaster allows battlers to surprise oncoming zombies who will never see it coming. Package includes blaster, stock with blaster, scope, tactical light, barrel extension, two 12-dart clips, 26 ZOMBIE STRIKE ELITE darts, and instructions. 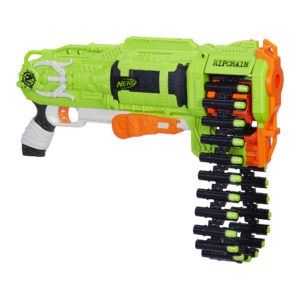 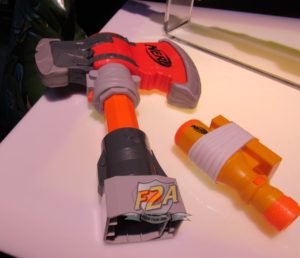 Picture from ‘Foam from Above’ 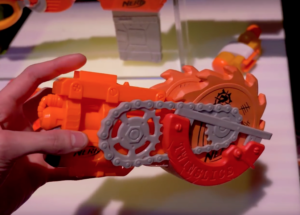 The zombie survivors are prepared for anything- with the new NERF ZOMBIE STRIKE SURVIVAL SYSTEM TWINSLICE attachment! Attach holder to any NERF blaster with a tactical rail and remove the stars to send them flying at oncoming zombies. The zombies won’t know what hit them! Package includes two foam stars and holder. 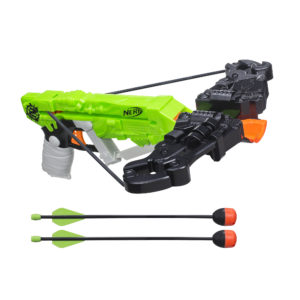 When zombie fighters need to strike back at the zombies, they use the NERF ZOMBIE STRIKE WRATHBOLT Crossbow! Take aim at zombie hordes and release soft-tipped arrows at the targets. To fight back against oncoming zombies, pull back the string and hook it in place, load an arrow into the crossbow, and pull the trigger to send the arrow slicing through the air. Package includes crossbow, bow arms, two whistler arrows, and instructions.

For some reason the Wrathbolt has already sneked into store shelves and Buffdaddy has already done a review. 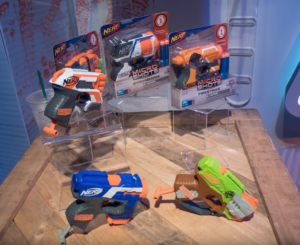 Battle opponents like never before with the NERF MICROSHOTS SERIES 2 Assortment! MICROSHOTS blasters capture the iconic look of the original NERF blasters fans know and love, but in a micro, super-deformed fun size. Simply load, prime, and pull the trigger for big fun in a small package. This one-shot blaster is as fun to collect as it is to blast! Series 2 includes one micro-sized version of the NERF N-STRIKE ELITE ROUGH CUT 4X4 blaster, NERF N-STRIKE ELITE STRYFE blaster, and NERF ZOMBIE STRIKE CROSSFIRE bow. Each package includes one blaster and two ELITE darts. Each sold separately.

Nerf will also re-release the Disruptor and FIrestrike with an extra six accustrike darts included. 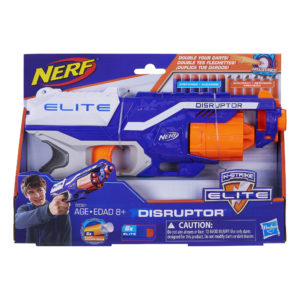 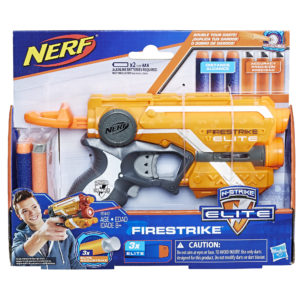 Congratulations for scrolling all the way down! There’s always a lot to see during this time of year. So, what are you most excited for? My personal favourite would be the Mega Accustrike Thunderhawk, as it’s probably the closest thing to a sniper rifle in the Nerf blaster world. The Rival Prometheus is an absolute monster. Didn’t think, Nerf would go for up to 200 rounds! Hefty price though. The most exciting attachment piece would have to be the Modulus Ghost Ops Chronobarrel – this is something fans have been wanting for years!