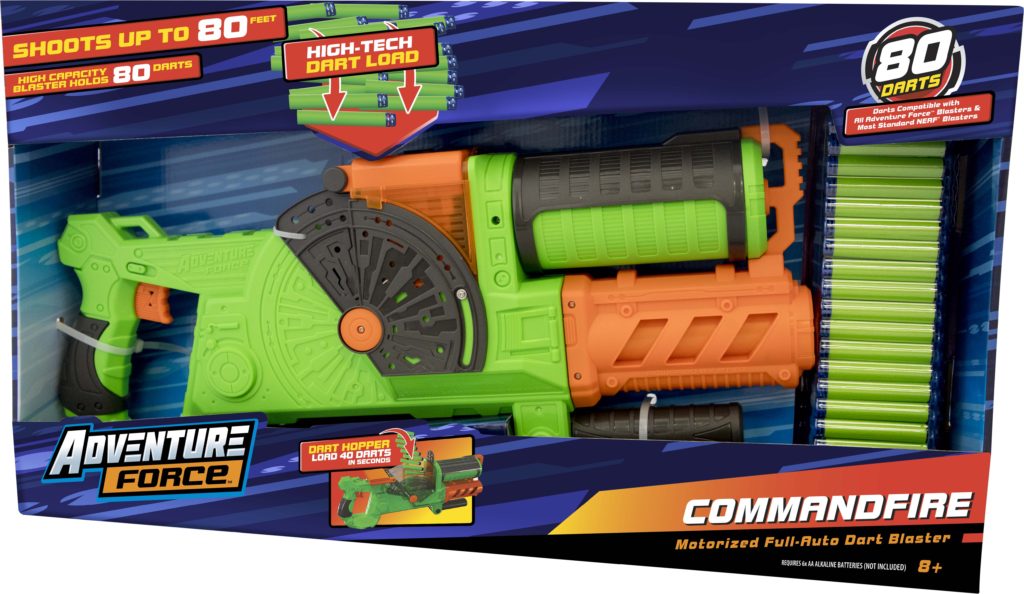 We have two blasters posted online to Walmart’s website: the Quantum and the Commandfire. The first is not unlike the Nemesis, including a large ball hopper. The second is a dart blaster that, intriguingly, is fed by a dart hopper. No idea how abuse-proof such a mechanism would be.

Credits to u/garvisdol and u/nerfcharmap over on Reddit for spotting these!

Tired of reloading one dart at a time? Adventure Force brings you the first revolutionary design that allows you to load 40 darts in seconds, leaving your competition in the dust! The high capacity Commandfire holds 80 darts, with 40 in the dart hopper and 40 in the storage compartment. The Commandfire high-tech dart loading system is matched by the blaster’s motorized full-auto firepower. Dont forget that the Commandfire is packed out with 80 of the new high performance waffle tip darts designed for increased accuracy boost.

Let the super-charged match begin! Players can have endless battles with the Quantum – the biggest Adventure Force Tactical Strike blaster yet that holds up to 100 Rounds. Fully automatic team competition firepower includes 75 Tactical Strike Rounds. The Quantum comes with 6 team color markers that quick-snap into the side of the blaster. Pick your squad and change teams in seconds. Whether team green, blue, or red, everyone will want the Quantum on their side to own the next battle. The Quantum is designed to dominate without breaking your bank as well. Top of the line performance with the Adventure Force Tactical Strike Quantum. Save Money. Battle Better!